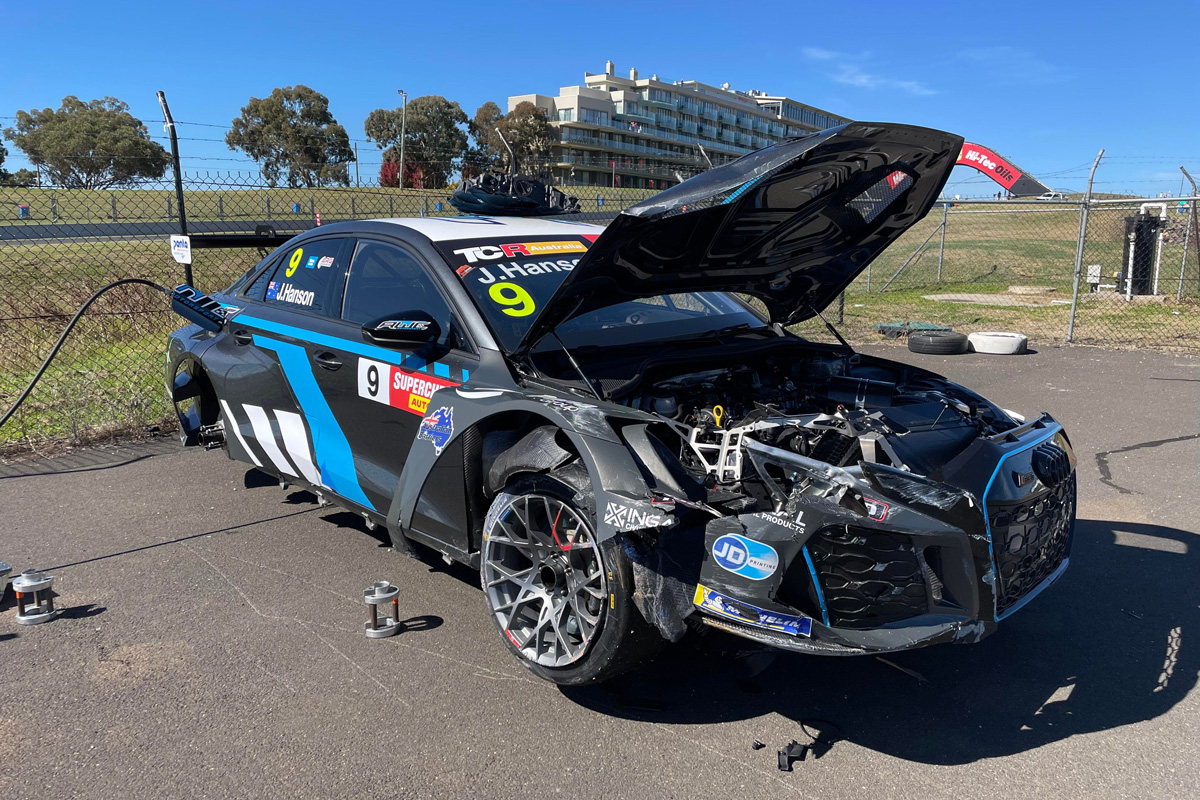 Two-time Supercheap Auto TCR Australia race winner Jay Hanson has conceded he is firmly on the back foot after crashing heavily on his first flying lap of the weekend at Mount Panorama.

Having found the wall at The Cutting, Hanson will switch to an older-spec spare Audi for the remainder of the Hi-Tec Oils Bathurst 6 Hour event, which incorporates Round 3 of the TCR season.

The Melbourne Performance Centre driver admitted the incident caught him by surprise, with him unsure whether it was purely a mistake or if fluid dropped by Michael Caruso’s ailing engine had a role to play.

“It’s lap one, Practice 1, we’re still getting tyre temp driving around and we come into Turn 3 there and the rear came around on me and that’s all it takes throughout this place, isn’t it?” said Hanson.

“It’s very unfortunate, we’re trying to get as many laps as we can and trying to learn the new car.

“We think the damage is definitely repairable but it’s going to take some time.”

MPC boss Troy Russell said it will be simple enough to get the spare Audi ready to rumble, and is not overly concerned about the damage to the new model.

“If it wasn’t Easter and there was a panel shop open in town, we could probably try to get the rails pulled back across and fix it, but being Easter Friday, finding a panel shop is really not going to happen,” said Russell.

“So we made the call, just can it, move into the other car and we’ll fix it when we get home.

“It’s just right-front chassis rail damage unfortunately, but other than that it’s not too bad, we’ll fix it.”

Positioned fifth in the standings, Hanson is eager to maximise the rest of the event.

“I’m very fortunate for the guys at MPC who are working very hard and to have this spare car here, not many teams can say they have a spare car that you can get into after a mistake like that.

“So unfortunate for Troy and everyone there but we’re going to get back out there, which is the main thing.

“Obviously we’re going to be on the back foot now, we’re just going to cruise around and see what we can do, but it’s very unfortunate and definitely not the way you want to start the weekend.”

Practice 2 is due to commence at 14:00 AEST this afternoon. Jordan Cox led the way from Aaron Cameron in the day’s opening session.

Stan Sport will provide live and ad-free coverage of the Bathurst 6 Hour track action on Saturday and Sunday.