Taking the start of the Formula 1 Australian Grand Prix at the wheel of the FIA Medical Car on Sunday was a dream come true for Karl Reindler.

The former Supercars full-timer was called up in place of regular Medical Car pilot Bruno Correia for last weekend’s event at Albert Park.

Joining the team on Wednesday, Reindler became just the third man in the last decade to perform the crucial role in support of the world’s largest annual sporting competition.

It was also the realisation of a dream after the now 36-year-old (who turns 37 on Monday) first pursued a career at the pinnacle of motorsport.

“I’ve watched Formula 1 since I was a young kid, staying up late at night with Dad,” Reindler told Speedcafe.com.

“For a long time, it was my dream to compete in Formula 1, that was sort of the trajectory I was on and aiming for when I went to Europe in 2005 and lived in London, racing in F3 and then obviously A1GP.

“That was ultimately what I wanted to do.

“I made the move back to Australia to compete in Supercars, and obviously grateful for the opportunities I’ve had, and I look back fondly on everything that I competed in, but in some respects, when you don’t make it to Formula 1, you feel like there’s unfinished business.”

And while Reindler wasn’t strapped aboard an F1 race car on Sunday, he still sat on the grid as the five lights went off, chasing the pack into the first corner.

“It was a really unusual feeling coming around the final corner, following Alex Albon in the Williams, and then lining up,” he admitted.

“I’ve seen those five lights turn on and then switch off hundreds of times on television, and obviously live at events, but to see it at the back of the grid was a pretty cool experience.

“And chasing the cars into Turn 1, not so much a chase when they’re twice as quick as you! – was quite an interesting experience.

“The vision, the haze of all the cars with the diffusers kicking up every dust particle on the circuit, and the fumes from the exhaust, created this really unusual haze.

“The one thing I never expected was the turbulence off the cars when you’re following,” he added.

“I’ve never experienced turbulence in any car on any circuit in any situation before like that. It felt like I was in a windstorm approaching Turn 1.” 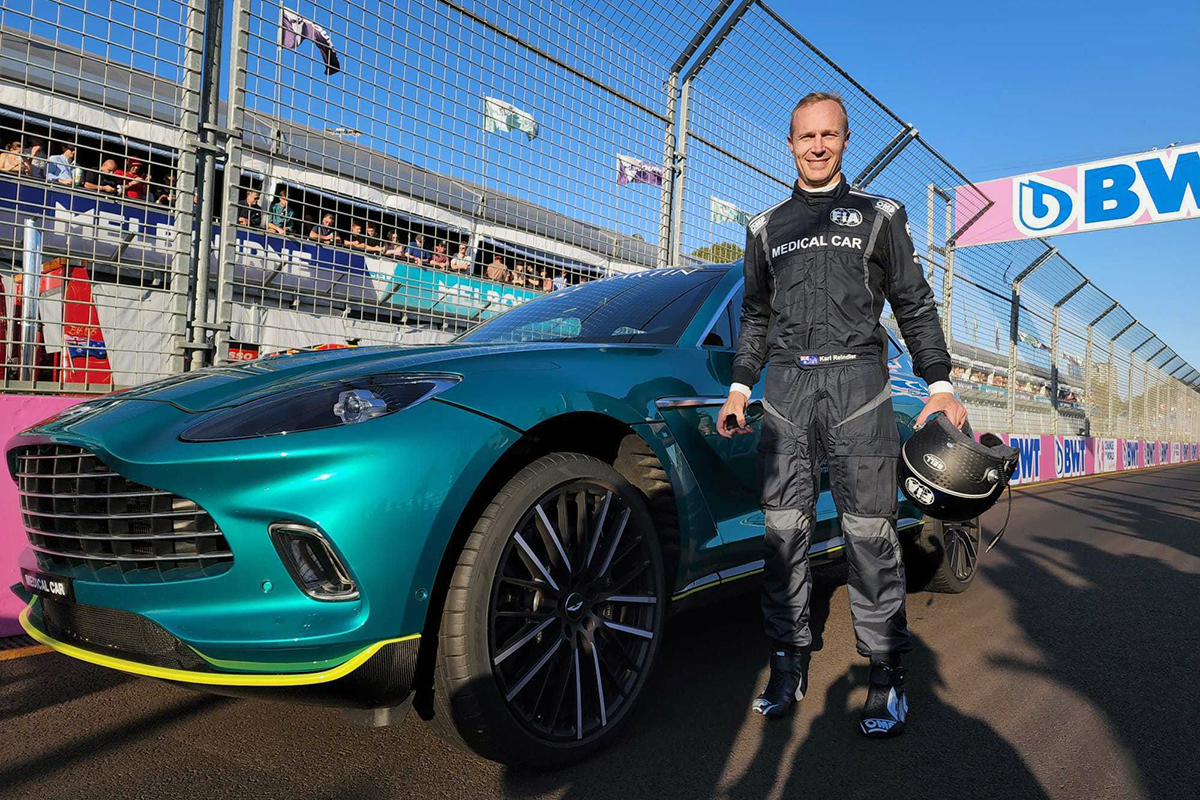 The opportunity to become the FIA Medical Car driver is one that has been under discussion for some time.

Reindler has a number of deep relationships in the FIA, some dating back to his own days of racing in Europe, and through those the opportunity arose.

There are also logistical issues that need to be managed, with Bruno Correia also part of the Formula E support staff.

“You absolutely need to have a back-up plan,” Reindler agreed.

“To think that Bernd Maylander [FIA Formula 1 Safety Car driver] himself hasn’t taken a sick day in the best part of 23 years, I think he said… one day Bernd will be unavailable.

“Whether it’s him getting sick, or someone from his family getting sick, or maybe he gets COVID, or whatever it might be, having someone there who understands how it works, the protocols, the expectations, I think is pretty important.

“I think the FIA have been clever in recognising that over the last 12 months.”

Reindler could yet take on the Medical Car driver role at future events, though on that he remains tight-lipped.

The FIA has confirmed to this writer that there will be a rotation as the year goes on, though that’s hardly a secret given there are further calendar clashes between F1 and Formula E.

Clashes exist over the British and Hungarian Grands Prix with Formula E in action in Vancouver and London respectively.

There is also an argument to be made for the travel aspect of the role, given the sport’s – and in particular the FIA’s – push towards becoming carbon zero. Reindler is therefore a logical fit for events such as the Singapore and Japanese Grands Prix, among others.

Though he won’t speak about what future opportunities there may be with the FIA and Formula 1, Reindler makes no secret of his enjoyment of last weekend’s experience.

“To me, the role genuinely feels meaningful,” he explained.

“Some of the most enjoyable things I’ve done in and around the sport of the last 10 years have been things to do with safety.”

Reindler has long been an advocate for safety in motorsport, and has worked with Motorsport Australia to deliver programmes in Romania, Sri Lanka, Nepal, South Korea, China, and in Australia covering both safety and risk management.

“That’s something I found really rewarding and I think that probably goes back to some of the incidents that I’ve been involved in over the years.

“I was pretty lucky in some respects to walk away from the incident at Barbagallo in 2011 relatively unscathed – I mean, quick trip to the hospital for some skin grafts later. It could have been a lot worse.

“I think that probably changed my philosophy towards safety,” he added.

“It’s pretty easy as a driver to think you’re invincible and think that nothing will ever happen to you. That kind of woke me up a bit on that day, and I started to take safety a bit more seriously.

“I’ve sat on panel before talking about safety, delivered training programmes, and this was a natural… it’s a unique and special role that only three people, including myself, have done over the last 12 years.

“But it kind of felt right, and it felt meaningful, and I’d like to think that if the opportunity presents itself to do more of these then I can have a positive impact on the sport and improve the safety standards for the better of everyone.”