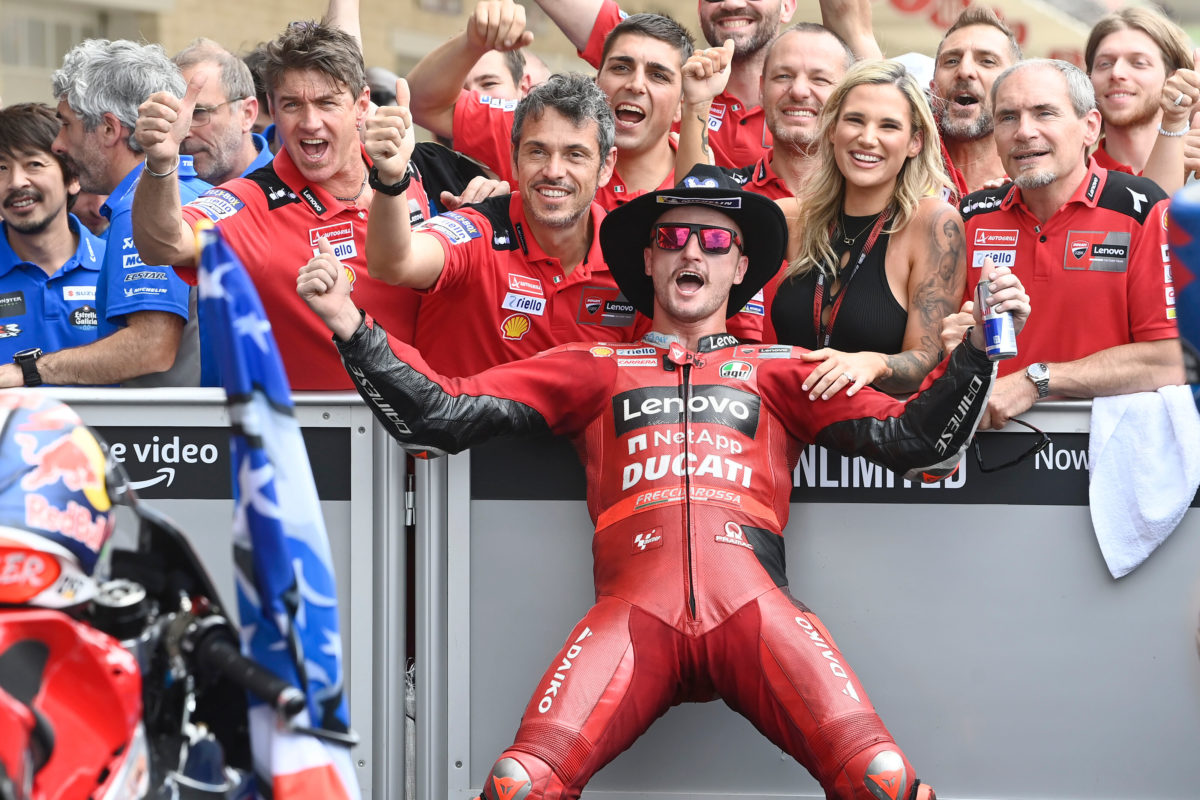 Jack Miller believes he remains well in contention for the MotoGP championship title, after picking up a first podium of the year at the Circuit of The Americas.

The three-time MotoGP race winner lifted himself to seventh in the championship with that third placing in the Grand Prix of the Americas, although he remains exactly 30 points away from top spot.

That lead in the standings is held once again by Gresini Racing’s Enea Bastianini, who capitalised on mistakes made by Miller to pass the Ducati Lenovo Team entry and ultimately win the race in Texas.

Still, the Queenslander was upbeat about the turnaround relative to Argentina a week prior, when he started and finished 14th at Termas de Rio Hondo.

He was also buoyed by a return to the podium, pointing out that he had no real chance to fight for a rostrum finish in Qatar due to the electronics failure, and finished fourth in Indonesia, before the shocker in Round 3.

“They say it is a rough start to 2022 but, I mean, the bike broke down in Qatar, I finished fourth in the second race and then, okay, [Argentina] was rough, but we’re only four races in and we’re already on the podium.

“So that’s a positive.

“Seventh in the championship… This championship’s very long [and] we’ve got a long way to go, but no, it feels good.”

Miller is the 10th rider to finish in the top three of a race in the year to date, with the Americas round representing the first in which there were repeat podium finishers for the season, namely Bastianini and runner-up Alex Rins.

“This championship’s so long and so many things can happen; it’s MotoGP in 2022,” added the factory Ducati rider.

“As I said, I’m the 10th rider now on the podium and we’re at the fourth race, so that says it all.

“I mean, this championship’s wide open.

“The real championship will start once we get back to Europe and get going through the motions and that kind of thing.

“But, all in all, very happy with the result in Texas. I’ve been on the podium here once before and it’s nice to be back on, and have a solid race like that, a good ride where I can push and pass, and have a bit of fun with the bike.”

After four rounds, Ducati leads the constructors’ championship by a 29-point margin over KTM, while Rins’ Team Suzuki Ecstar is 32 points up Red Bull KTM Factory Racing in the teams’ standings.

Riders will be in action in Europe for the first time this season when the Portuguese Grand Prix is held at Portimao on April 22-24.