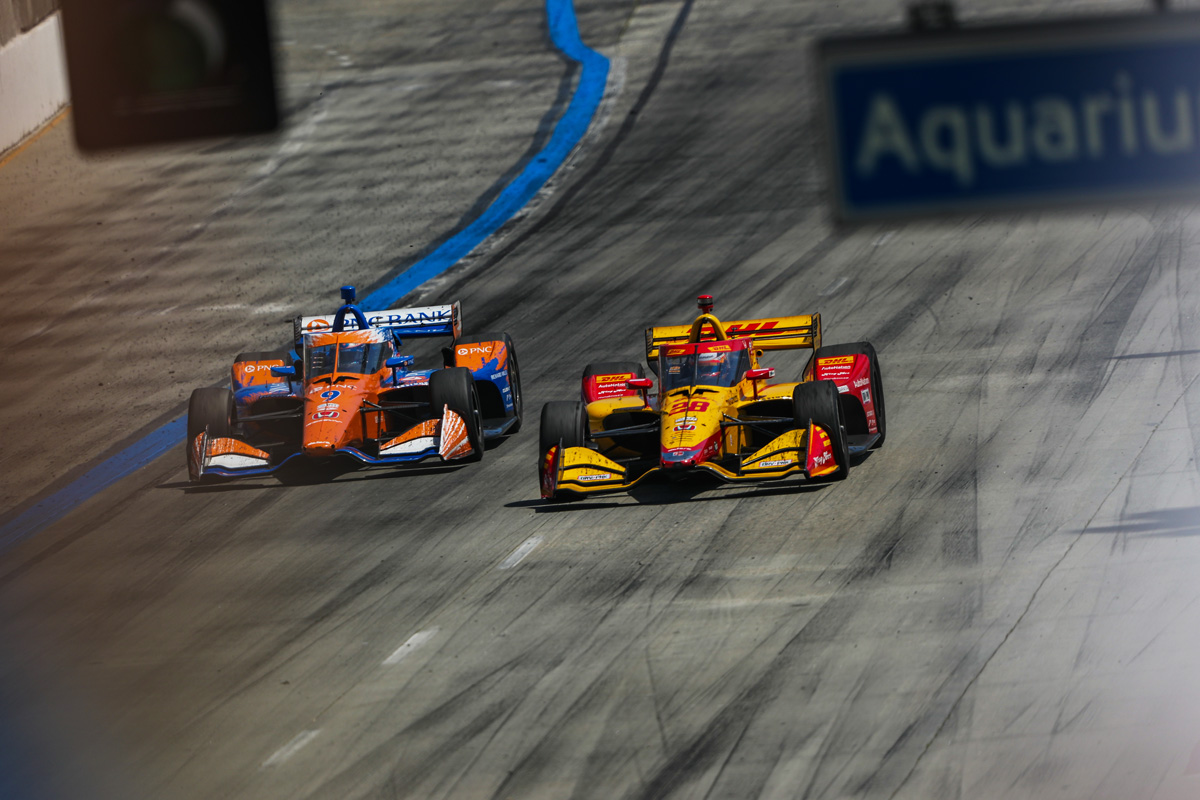 Romain Grosjean has explained why he had no push-to-pass left with which to help fight Josef Newgarden for victory in the closing stages of the Long Beach IndyCar race.

The Andretti Autosport driver was one of the more significant movers in the 85-lap race, climbing from sixth to second by the time the chequered flag waved.

However, he was compromised in his ability to try and make that final pass which would have yielded the win by the fact he had exhausted ‘the button’ at least as early as the 10th-last lap.

That was seemingly crucial when Grosjean got a run on Newgarden as the field took the green flag for a restart on Lap 81, which the Team Penske driver manage to stave off when they braked for Turn 1.

The Frenchman says he had to use up his push-to-pass trying to elevate himself early in the race, and then in his two attempts to pass Alex Palou for second position, on Laps 69 and 70.

“At the beginning, I didn’t want to get stuck behind some drivers that were on a different strategy,” he said.

“I was behind Scott Dixon for a while and I knew he was on the three-stopper [actually an early two-stopper] so I used some there, I used some before the pit and after the pit to try to make some good way ahead… I think that was it.

“I had 30 seconds or 40 seconds left; I think I used 15 [seconds] on the straight with Alex, but he had really good brakes to Turn 1, so then I tried it again on the next lap, which was my 30 seconds gone.

“It’s a long straight line here. Yeah, we trimmed a little bit to go faster on the straight but that’s why I went.

“I thought at the last pit stop that I still had a hundred seconds, so I thought I was pretty good, but they [the remaining seconds] just disappeared for some reason.

“Maybe they got stolen,” quipped Grosjean in conclusion.

The #28 Andretti Honda was just within a second of the race-leading #2 Penske Chevrolet as they took the white flag, before a Caution was called again midway through that final lap in response to Takuma Sato finding the barriers.

Newgarden had said that his was “not a token victory” despite how the race ended, and Grosjean essentially agreed that it was decided as a contest by the time the yellows were unfurled for a fourth and final time.

“And, Josef was driving well and not making any mistakes, so it’s not ideal to finish under yellow but I don’t think the result would have been much different.”

Grosjean has now rebounded to sixth in the series, ahead of a test at Indianapolis on April 20-21 and the next competitive event of the season at Barber Motorsports Park on April 29-May 1 (all dates local time).