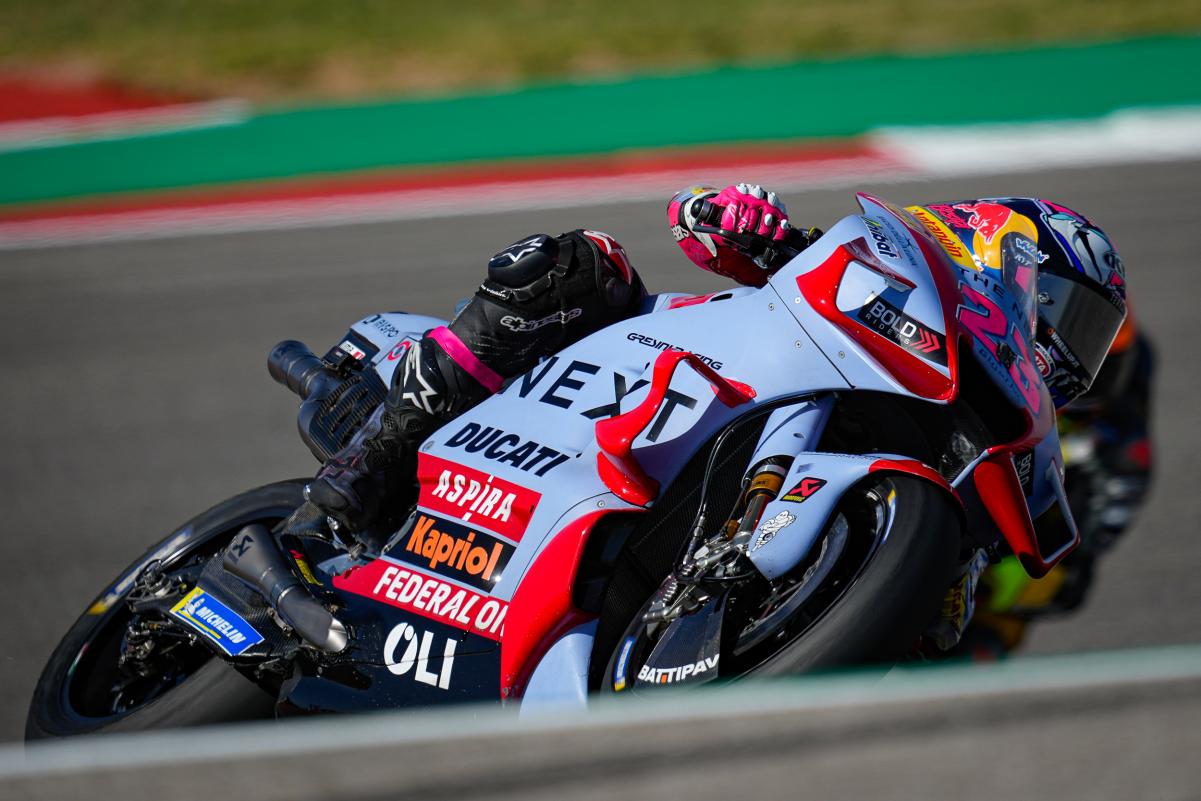 Gresini Racing’s Bastianini prevailed by just over two seconds in the end, with Suzuki Ecstar’s Alex Rins passing Miller, twice, on the 20th and final lap at the Circuit of The Americas.

Joan Mir finished fourth, ahead of Francesco Bagnaia and Marc Marquez, the latter of whom stormed his way back from the very rear of the field after a poor getaway.

The net result is that Round 1 winner Bastianini is back in the lead of the championship, with a five-point margin over Rins and another six points on he who was the victor a week earlier in Argentina, namely Aleix Espargaro (Aprilia Racing).

When the lights went out at COTA, Miller (Ducati Lenovo Team) got a slightly better launch from the middle of the front row than pole-sitter Jorge Martin (Pramac Ducati) and, with the inside line for the first corner, took the early lead.

Martin passed Miller at Turn 19 but the Queenslander went straight back down the inside of the Spaniard at Turn 20 and would head the field back to the start/finish line at the end of the standing lap.

Marquez (Repsol Honda) sat 17th, having dropped all the way to the back of the 24-bike field at the start.

Zarco quickly restored the all-Ducati top five from qualifying by overtaking Quartararo, before Rins passed team-mate Mir for seventh on Lap 2 and Quartararo for sixth on Lap 3.

Zarco was up to fourth when he made a move on Bagnaia stick on Lap 5 at Turn 1, at which time the top five was still covered by 1.3s, and Rins finally prevailed in his battle with Quartararo at the end of the back straight on that same lap, promoting #42 to sixth.

Mir soon also got by Quartararo, as Rins passed Bagnaia for fifth on their way down the hill on Lap 6, at which time he was about half a second behind Zarco.

Rins passed Zarco on Lap 7 at Turn 11, although the Frenchman used Ducati power to blaze back ahead of the Suzuki down the back straight.

At the end of said straight, Marquez got back into the top 10 when he went down the inside of team-mate Pol Espargaro, as Martin and Bastianini continued to tail Miller at the very front of the field.

Rins executed a block pass on Zarco at his preferred location of Turn 11 on Lap 9 and finally shook off #5 when the Frenchman could not stick the re-pass at Turn 12.

As far as the top three was concerned, Miller was starting to put a few more tenths between himself and Martin, while Bastianini was hardly unsettled when Rins made an unsuccessful attempt to pass the #23 Ducati on Lap 10.

When Bastianini went up the inside of Martin on Lap 12 at Turn 1, he was still within a second of Miller, and set about catching up to the factory Ducati rider.

Miller tried to respond, but had been caught by the Gresini rider on Lap 15, and ceded the lead as they ran down the back straight on Lap 16.

Bastianini was half a second clear of #43 at the end of Lap 17, and a full second up the road with two laps to go, before converting that advantage into his second victory of both this season and his MotoGP career.

The battle for the minor placings, however, turned out to be a thriller.

Rins picked off a fading Martin to put himself into third on Lap 12, and started to become a threat to Miller in the final few laps.

On the last lap, he went down the inside of the #43 Ducati at the Turn 11 hairpin, had not the horsepower to stay ahead as they tore down the back straight, but managed to pass Miller again at Turn 19.

Rins finished 2.058s behind Bastianini and 0.254s ahead of Miller, with Mir fourth on the second of the Suzukis.

The latter, as well as Bagnaia, had passed Martin on Lap 14 and that was where they would stay for the rest of the race.

Marquez, meanwhile, had not long got into ninth position when he and fellow champion Quartararo engaged in battle on Lap 14.

They both cleared Martin on Lap 17 and continued with some increasingly ragged exchanges until Marquez took the chequered flag barely a tenth of a second ahead of Quartararo on Lap 20.

Martin got home in eighth and team-mate Zarco had a similar story.

He lost fifth spot to Bagnaia on Lap 12 and continued his slide until crossing the finish line in ninth, with Maverick Viñales (Aprilia Racing) rounding out the top 10.

Aleix Espargaro finished 11th, ahead of Brad Binder (Red Bull KTM), Pol Espargaro, and Takaaki Nakagami (Idemitsu LCR Honda), the latter of whom ran as high as seventh, on the opening lap.

Alex Marquez (Castrol LCR Honda) crashed out on Lap 5, after Marco Bezzecchi had already apparently relented due to smoke coming from his Mooney VR46 Ducati.