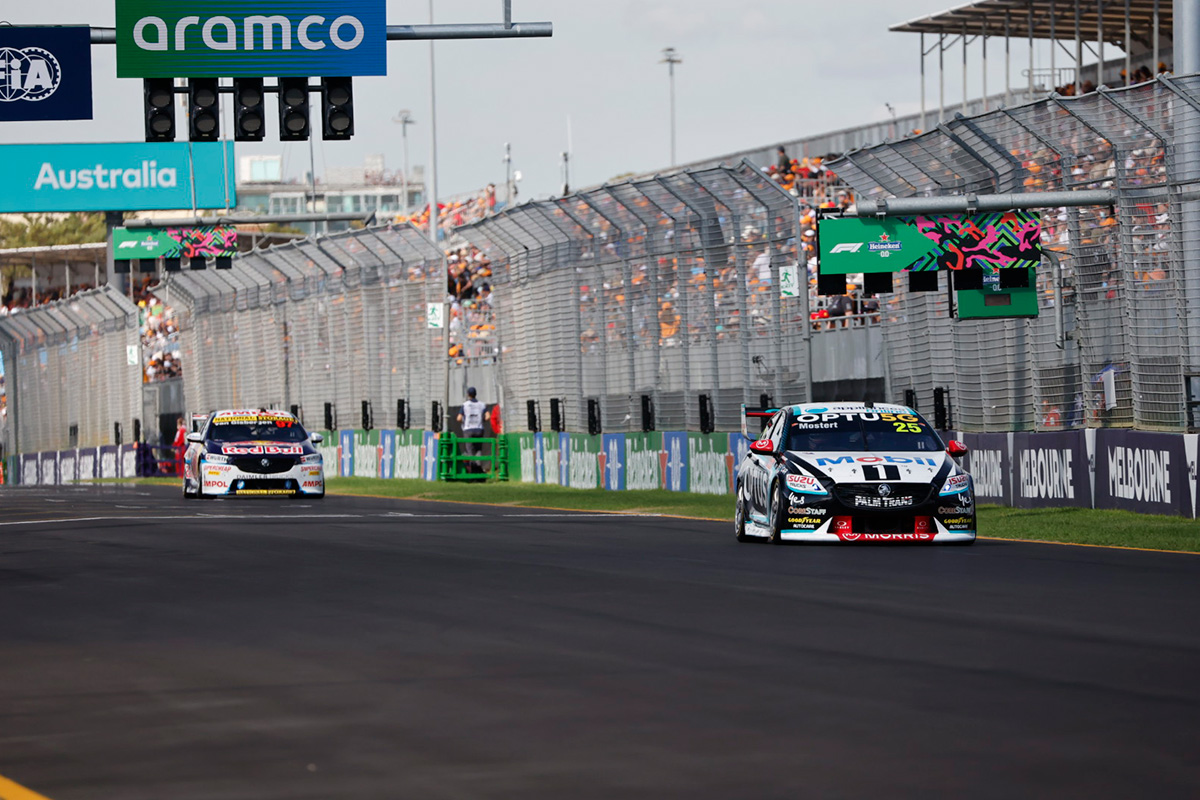 From third on the grid, the #25 Holden ZB Commodore pilot executed an overcut and left his rivals in his wake.

Nursing some rubber that had seen better days, the left front tyre let go with three laps remaining and van Gisbergen plummeted to 20th as he made an unscheduled second pit stop.

Having started from pole position, Shell V-Power Racing Team driver Will Davison would wind up second in the wake of van Gisbergen’s drama, just ahead of team-mate Anton De Pasquale who completed the podium.

Off the line, it was an even start between Davison and De Pasquale. Third place starter Mostert got a good getaway, threatening to take second away from De Pasquale, however, the Dick Johnson Racing driver held sway.

Proceedings were brought to a brief halt with Jack Smith (#4 SCT Racing) idle on the grid after his clutch failed.

Racing resumed on Lap 3 and the field made it cleanly through Turn 1.

All of those who started on the hard compound tyre found themselves pegged to the bottom of the order in the early going.

Andre Heimgartner (#8 R&J Batteries Racing) was the first of those in 22nd, followed by Todd Hazelwood (#35 Truck Assist Racing) and Macauley Jones (#96 Tools.com).

From fourth, Randle was the first to blink at the end of Lap 3, pitting to get off the soft compound tyre. Any hopes of getting an undercut were undone though after a slow pit stop.

Van Gisbergen muscled his way past Waters for fifth on Lap 3, rubbing doors at the penultimate turn.

Davison found himself under the attack from his team-mate, and soon enough De Pasquale in the #11 was into the pits at the end of Lap 4 to get out from under the rear wing of the #17 entry.

During that sequence, Feeney would cop a five-second penalty for an unsafe release after contact with Holdsworth. That would drop him to 12th by the race’s end.

Come Lap 5, Davison locked up the left front at Turn 9, bringing Mostert and van Gisbergen within striking distance. He duly pitted that lap to get out of the melee.

That handed the lead to Mostert, although van Gisbergen got his nose to the inside at the final corner and took the place away into Turn 1.

On the rejoin, Davison returned to the fold just ahead of De Pasquale.

Van Gisbergen’s spell at the head of the field lasted all of one lap, coming to the pit lane on Lap 6.

Despite pitting later than his Dick Johnson Racing rivals, van Gisbergen came out in front of Davison and De Pasquale.

If anything, it appeared that Davison was holding up De Pasquale. The #11 suffered a sizeable lock-up at Turn 9 and nearly went into the back of the #17.

Waters was the next to cop a five-second penalty, another falling foul to a pit lane infringement.

For the first time all weekend, the overcut was paying dividends. Mostert pitted on Lap 7 and returned out in front of van Gisbergen into the effective lead of the race.

Reynolds’ day came to an early end after contact with the wall forced him to the pit lane with damage to the #26 Ford Mustang.

Soon enough, van Gisbergen began ranging up on the rear of Mostert. However, he made a mistake at Turn 9 and locked up heavily, torching the left front tyre.

Macauley Jones found himself in trouble on Lap 11, locking up at Turn 11 and making it to the outside tyre wall. Fortunately, he managed to continue.

Drama struck at the death with just three laps to go when the left front tyre let go on the #97 into Turn 11.

The trailing cars duly blazed by as van Gisbergen limped his way back to the pit lane. As a result, he would plummet to 20th.

At the head of the field, Mostert cruised across the line to score his second win of the weekend.

Davison was second, some five and a half seconds in arrears while De Pasquale was third.

Cameron Waters crossed the line fourth, although that five-second penalty eventually dropped him to seventh.