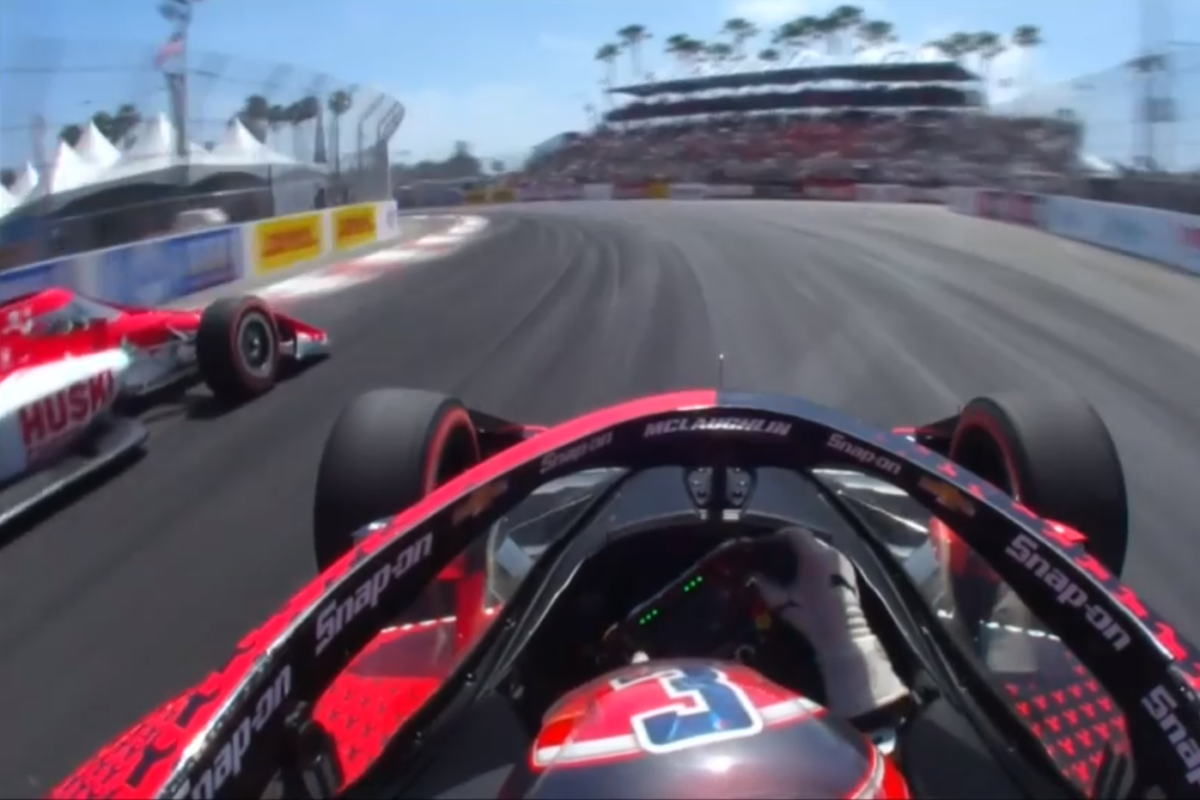 IndyCar Series leader Scott McLaughlin and Marcus Ericsson have pointed the finger at each other after both failed to get through to the Fast Six in qualifying at Long Beach.

Ericsson is set to start eighth and McLaughlin ninth at the third event of the season, after the latter had been on the front row for each of the first two races.

Unsurprisingly, traffic was a factor in qualifying on the tight Long Beach streets, with Jimmie Johnson (Chip Ganassi Racing) having already been pinged for interference of Graham Rahal (Rahal Letterman Lanigan Racing) in the first group that went out.

It was after the second round of qualifying, however, that drivers were left waiting for several minutes as stewards reviewed multiple incidents of possible impeding, only to decide that positions would indeed stand.

Romain Grosjean (Andretti Autosport), who got through to the Fast Six, was one of the drivers who came under review, but it was the #3 Team Penske entry and the #8 Chip Ganassi Racing entry which were seen in close quarters on television cameras.

On their crucial, second runs, McLaughlin slowed exiting Turn 9, apparently with the intent of letting Ericsson through, but then they went side-by-side into Turn 10 and that seemed to compromise both for their next laps.

“Our car was awesome, there was nothing wrong with our car; the Snap-On Chevy’s very fast,” said McLaughlin on the Peacock broadcast as drivers waited for a decision.

“[It was] Just a cluster out there with the traffic.

“I don’t know what Marcus was doing; like, he came at me like on a fast lap, I tried to do the right thing and pull out of the way, and then he just stops, so clustered the whole thing up, and then everyone behind us… It was just a whole thing.

“I mean, I don’t know; we’re trying to find gaps out there but you think a guy’s on a fast lap, you make a gap for him, and then he stops right next to you and won’t let you back through…”

Ericsson, however, claimed that he had already been impeded by the New Zealander and was not about to let him have track position for the next lap.

“I’m on a hot lap here and he’s backing off and then he’s trying to pass me, so I don’t buy that, sorry,” said the Swede.

“He’s moving over for me because I’m on a hot lap and he’s already impeded my lap, I had to lift, and then he’s trying to get me back.”

McLaughlin’s team-mate Will Power was also affected by traffic in Round 2 when he caught Pato O’Ward’s McLaren SP car at the Turn 11 hairpin which feeds onto the main ‘straight’.

However, the Queenslander, who qualified seventh, said that O’Ward was simply another victim of a chain reaction.

“I don’t know who was backing him up, but it kind of sucks when they do it in the hairpin because it ruins the money lap I was on for the first one, then you’ve ruined the next one because you’re on the guy’s gearbox,” recounted Power.

“That was it for me; obviously, by the third lap, your tyres are gone.

“Clearly, he got held up by someone as well because he would have been going, so it’s just an accordion effect; there’s nothing you can do about it.

“It’s good when they do it on the back straight because you know, ‘Alright, I’m going to have to abort this lap,’ but when you get all the way to the hairpin, like in that last sector, there’s nothing you can do because it ruins that lap and the next lap after that.

“Being on his gearbox here, [when] you’re kind of within a second of the car [ahead], you can’t do much; you’ve kind of got dirty air.”

In fact, as the Formula 1 season continues in Melbourne this weekend, he plans to channel his inner Daniel Ricciardo in California.

“What did Danny Ric say; ‘Just lick the stamp and send it’? So, we’ll be right.”

The field is next on-track on Monday morning (AEST) for a half-hour Warm Up, before race start at 05:30 AEST.