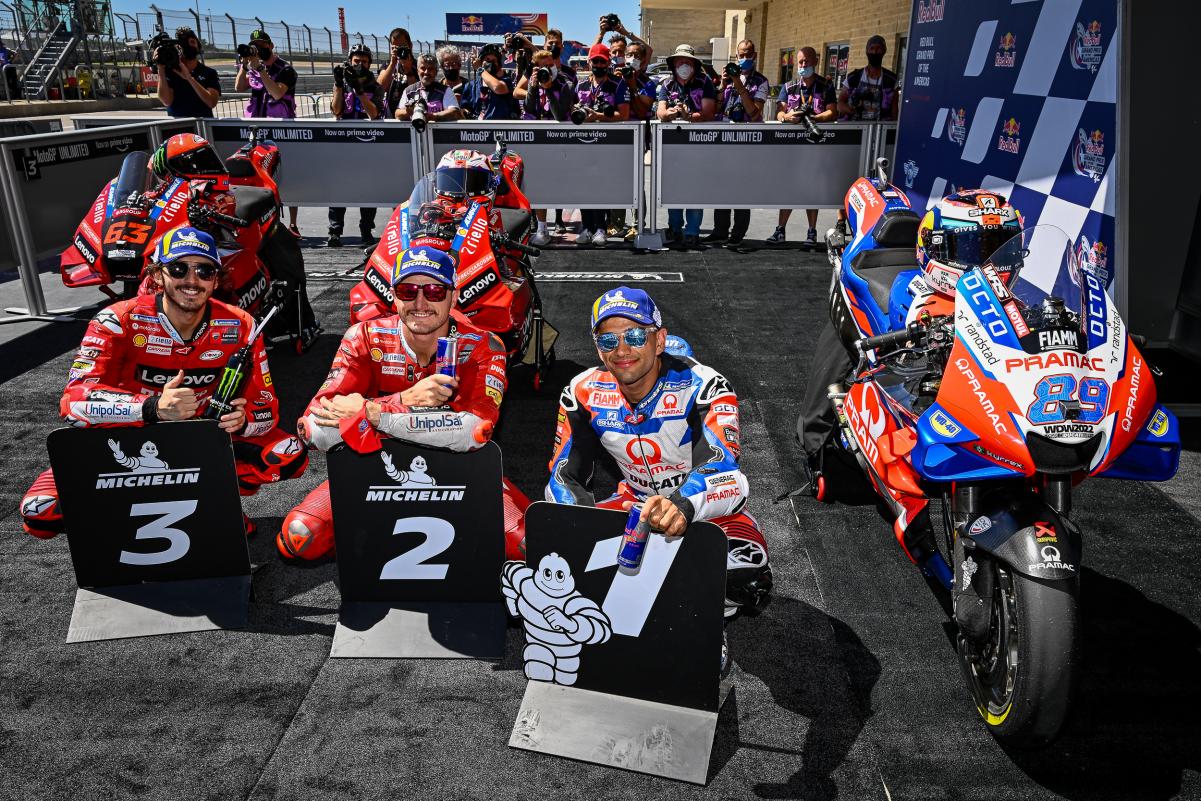 Jorge Martin has snatched pole position for MotoGP’s Grand Prix of the Americas from Jack Miller by a margin of three thousandths of a second.

Ducati dominated qualifying at the Circuit of the America, with Francesco Bagnaia making for a front row lockout alongside Pramac Racing’s Martin and Miller on the other factory entry.

However, the Bologna marque swept the whole top five, with six of the eight Desmosedicis in the field making it through to Qualifying 2 at Round 4 of the season.

Repsol Honda’s Marc Marquez was sixth-quickest at that point while Quartararo held seventh, although he was getting a lift back to the pits on a scooter after a front-end washout at Turn 19.

A Ducati pole never looked in doubt when riders went back out, with Bagnaia next to move the benchmark as he clocked a 2:02.167s.

His Ducati Lenovo team-mate Miller, who went against the trend by running a soft Michelin tyre on the front also, then reclaimed provisional pole with a 2:02.042s which reset COTA’s all time lap record.

That seemed good enough when Martin ceded more than a tenth of a second on the cumulative time to the end of Sector 3, but the Spaniard rallied to clock a 2:02.039s just before the chequered flag.

Suzuki Ecstar duo Alex Rins and Joan Mir will line up on Row 3, with Marquez alongside them.

All three podium finishers from last weekend’s Argentina Grand Prix fell into Q1, and two of those were top two initially, with Rins on a 2:02.723s and Aleix Espargaro (Aprilia Racing) on a 2:02.922s.

Martin, the other rider in that trio, then went quickest on a 2:02.487s before returning to the pits at the end of his first run.

Espargaro was trying to get back into the top two when he went down at Turn 8, although he would not slip any further back than the 13th on the grid which he held at the time.

The last start winner will be joined on Row 5 by team-mate Maverick Viñales and Andrea Dovizioso (WithU RNF Yamaha).

Remy Gardner apparently crashed his Tech3 KTM on the way to earning 22nd on the grid, ahead of Alex Marquez (Castrol LCR Honda) and Darryn Binder (WithU RNF Yamaha), who also had a spill in Q1.

Race start takes place on Monday morning at 04:00 AEST, with 20 laps the journey.