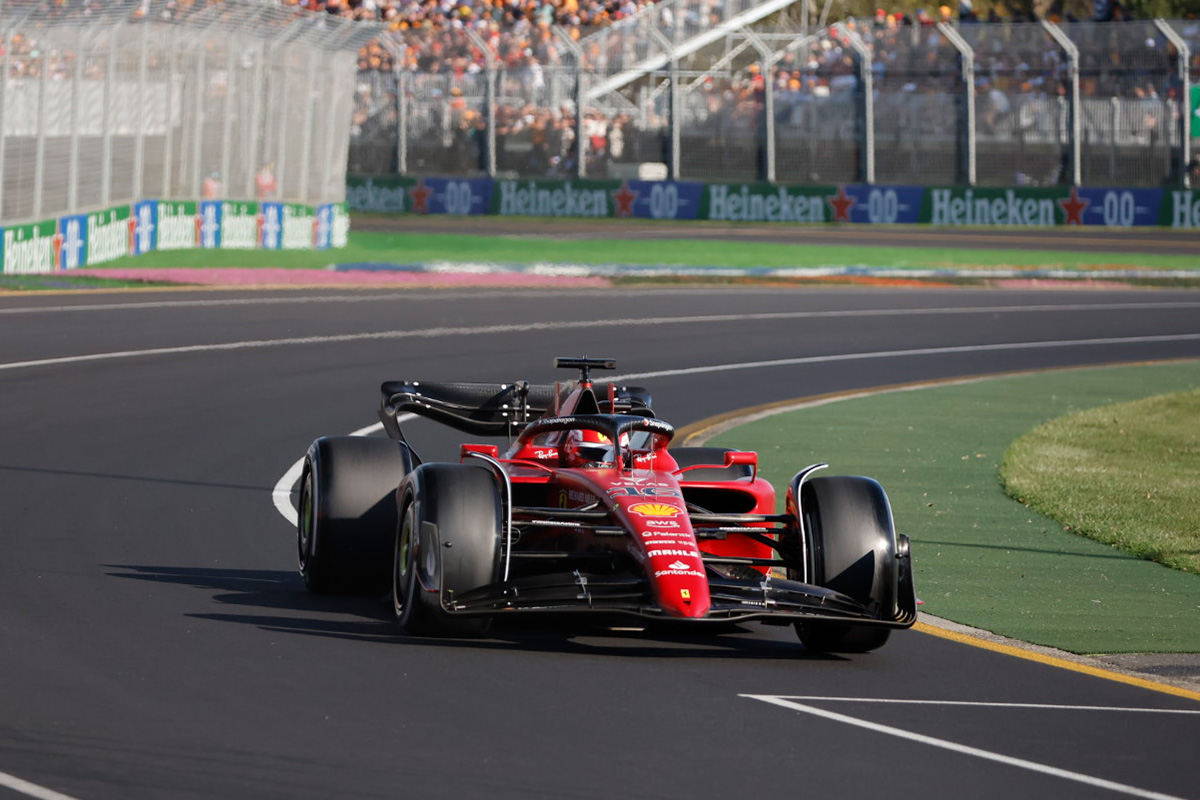 Charles Leclerc has won the Formula 1 Australian Grand Prix in dominant fashion while the man who would be his nearest rival, Max Verstappen, failed to make the finish.

Leclerc in fact achieved a grand slam at Albert Park, qualifying his Ferrari on pole position, leading all the way, and setting the fastest lap when he clocked a 1:20.260s on the 58th and final lap.

Verstappen looked like finishing a relatively distant second until a technical problem for Car #1 with 20 laps remaining, and it was Red Bull Racing team-mate Sergio Perez who was ultimately the runner-up.

Perez took the chequered flag 20.524s back from Leclerc, with Mercedes’ George Russell also on the podium at another 5.069s behind the race winner.

Lewis Hamilton finished fourth in the other Mercedes, ahead of McLaren duo Lando Norris and Daniel Ricciardo, while Carlos Sainz spun out of the race in the second Scuderia Ferrari entry.

Leclerc’s lead in the world drivers’ championship has grown to 34 points, with Russell climbing to second as a result of the dramas for Sainz and Verstappen.

In the constructors’ standings, Ferrari is 39 points up on second-placed Mercedes.

Back at the start, Leclerc led the field to the first corner, ahead of fellow front row starter Verstappen.

Hamilton emerged third from the opening corners courtesy of a good start and a squeeze for Perez, who dropped to fourth, from Russell, Norris, Ricciardo, Esteban Ocon (Alpine), Pierre Gasly (AlphaTauri), and Fernando Alonso (Alpine).

Sainz was first of those to start on hard compound (C2) tyres, in ninth position, but dropped to 13th in the opening moments and was 14th at the end of the standing lap.

It got even worse for the Spaniard on Lap 2 when he overshot Turn 9 and spun through the infield, barely missing the Alfa Romeos on his way back across the track before coming to rest in the gravel trap on the outside of Turn 10.

The incident triggered a Virtual Safety Car initially and then a full Safety Car, at which point the top 10 was as you were.

Leclerc led the field back to the restart on Lap 7, and was a full second clear of Verstappen after just two laps more.

Both were gapping Hamilton at an even faster rate, and Perez dived past the Mercedes to take over third spot on Lap 10 at Turn 3.

As Verstappen complained of graining on his medium compound (C3) left-front tyre, Leclerc was 4.3s up the road after a dozen laps, with Perez that much further back again.

Ocon was first of the top 10 to pit when he came in to swap his mediums for hards on Lap 17, and Verstappen was into the lane a lap latter, by which time he had dropped to around 9.0s behind leader Leclerc.

The Dutchman did, however, emerge in clear air as he took up seventh position, as team-mate Perez began to come under pressure from Hamilton.

Perez stopped at the end of Lap 20, as did Norris, while Ricciardo was in to exchange his mediums for hards on Lap 21.

The Australian rejoined just ahead of Alexander Albon and barely managed to fend off the Williams as they arrived at Turn 3.

Leclerc pitted for his set of hard tyres at the end of Lap 22, as did Hamilton.

The Ferrari driver resumed in third while the seven-time champion got out in fifth position, ahead of Perez in what represented a genuine change of the effective third position in the race.

Hamilton held the spot for less than a lap, Perez pulling off a bold move around the outside as they ran towards the flip-flop on Lap 23, just before a second Safety Car period was triggered by a crash for Sebastian Vettel.

The German had sat his Aston Martin up on the exit kerb at Turn 4, causing him to spin across the track and into the concrete wall on drivers’ left.

The timing of the Safety Car was fortuitous for Russell, who was called into the pits to discard his mediums for hards and was able to resume in third position.

As such, the order was Leclerc in the lead from Verstappen, Russell, and Alonso, the latter of whom had still not stopped to get rid of the hard tyres which he started on.

Perez was fifth, ahead of Hamilton, Kevin Magnussen (Haas), Norris, Ricciardo, Alexander Albon (Williams) in 10th, and Ocon in 11th, with Magnussen and Albon on the same strategy as Alonso.

As the field went for the second restart of the race, effective Lap 27, Verstappen got a run on Leclerc and the race leader had to play defensive as they steamed towards the first corner.

Leclerc was 2.4s ahead at the end of the first three racing laps after that Safety Car period, while Perez passed Alonso for fourth on Lap 30 at Turn 3, at which point he was 2.0s back from Russell.

By the time Lap 35 was done, Hamilton had also cleared the #14 Alpine entry, and the McLarens had cleared both that car as well as Magnussen, meaning Norris was sixth and Ricciardo seventh.

On Lap 36, Perez moved up to third position when a slower Russell let the Red Bull past as they ran towards Ascari.

Leclerc was more than five seconds ahead of Verstappen, albeit with those two having traded fastest laps, when disaster struck for the Red Bull driver with 20 laps to go.

He reported smelling “some weird fluid” as he parked off to the side of Turn 2 on Lap 39, with flames seen at the rear end of Car #1.

It led to a Virtual Safety Car, which Alonso and Magnussen used as an opportunity to serve their pit stops and get onto medium tyres for the run home.

Leclerc led Perez by almost 12 seconds at that point, from Russell, Hamilton, Norris, Ricciardo, and Albon, who still had not stopped.

Ocon was eighth, and Stroll ninth, the latter having swapped from hards to mediums and back under the first Safety Car period, then taken a second set of hards at the end of Lap 23.

Rounding out the top 10 was Gasly, with Alonso back in 13th position and Magnussen 17th.

The margin between the two was over 20 seconds on Lap 53, and sat around that figure for the balance of the race.

Behind those two at the chequered flag were Russell, Hamilton, Norris, Ricciardo, and Ocon, who inherited seventh when Albon finally pitted with a lap to go.

The latter pitted with four laps to go to take another set of medium tyres, in an ultimately unsuccessful bid to set the fastest lap and deny Leclerc that point.

Verstappen, Vettel, and Sainz did not see the chequered flag.

There will be a post-race investigation into a potential breach of Safety Car procedure, involving Schumacher, Tsunoda, and Gasly.

Round 4, the Emilia Romagna Grand Prix, takes place on April 22-24 at Imola.