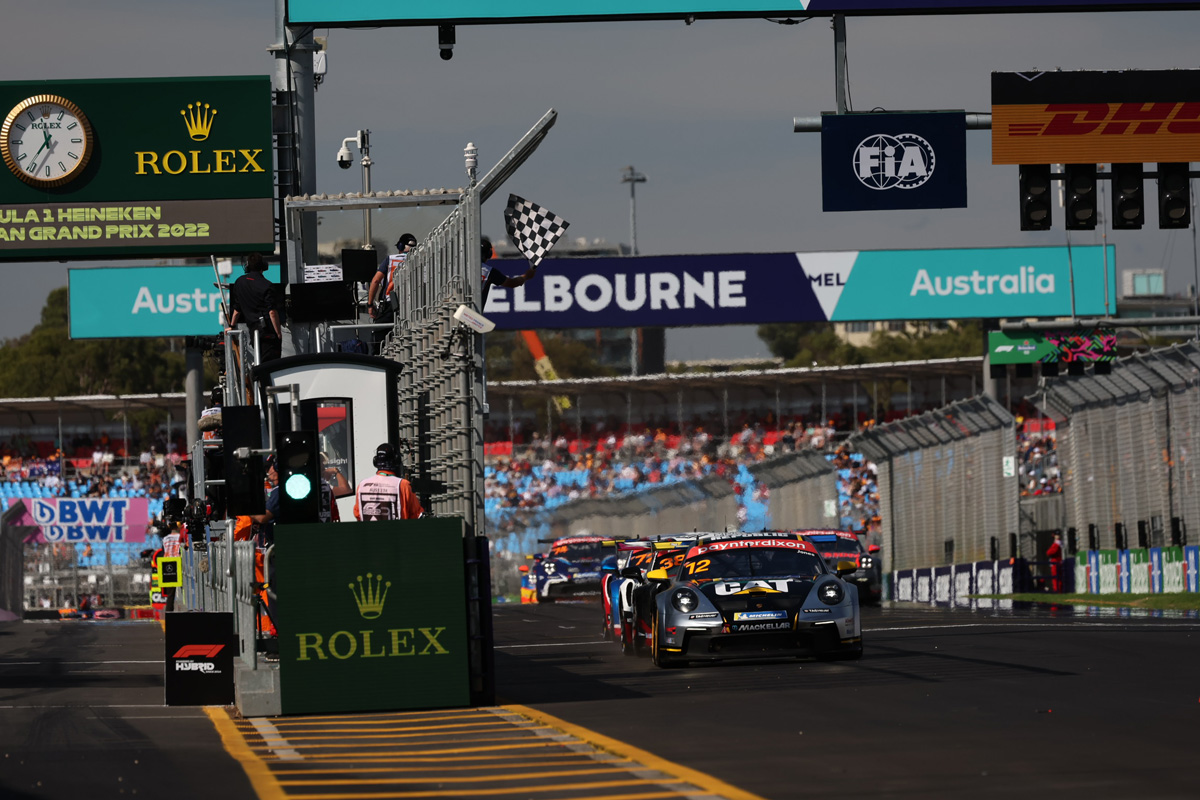 The McElrea Racing driver got the best getaway of the top four starters, taking the lead by Turn 1, which he would not relinquish for the remainder of the race.

From row two, it was Jones who got the holeshot over Aaron Love. Wall was quick away too, getting up to third.

Having fallen to second, Love locked up on the run to Turn 4 and gave race leader Jones a nudge.

Despite the contact, Jones carried on unabated. Love, however, ceded position to Wall who rose to second with a pass around the outside at Turn 4.

Love found himself in the thick of it, getting out of shape at Turn 7 and onto the grass. Vidau briefly challenged him for third, but Love held sway.

Youlden was the biggest mover on the opening lap, rising three places in the #53 Tekworkx entry.

Come Lap 2, Nick McBride found himself in trouble at Turn 11, his #8 beached in the gravel trap.

Moments later, and Callum Hedge was suddenly facing the wrong way on the front straight. The #17 backed into the wall, causing damage too significant to continue.

The chaos continued as Mouzouris got into the back of Jackson Walls at Turn 1, sending the #11 into a spin and backwards into the tyre barrier.

Mouzouris had seemingly suffered damage to his #6 as he bowled a wide at Turn 3 and returned to the pit lane to retire that lap.

Shortly after Walls’ woes, McElrea Racing team-mate Bayley Hall spun the #28 entry on his own at Turn 3.

With Walls stopped against the tyre barrier and McBride buried in the sand, the Safety Car was called.

Ryan Suhle went wide out of Turn 10, though Pancione bettered him by putting all four wheels off the road, dropping behind Simon Fallon, Michael Almond and Dale Wood to ninth.

Having made an impressive rise to fourth, Youlden looked likely to threaten Love for third. However, that battle was brief as the pair made contact at Turn 11, sending Love into the gravel.

Youlden didn’t come away unscathed either, however, limping back to the pit lane with damage.

After another brief Safety Car intervention, racing resumed with two laps to go.

Fallon made a fast restart from seventh, moving to the outside of Suhle at Turn 1. Side-by-side through Turn 2, the Earl Bamber Motorsport driver got squeezed by his Sonic Motor Racing Services rival, duly slapping the wall.

That did enough damage to Suhle’s car, dropping down the order to an eventual 17th by the race’s end.

Despite a brief challenge from Wall, Jones would come across the line to win by a mere 0.1s. Vidau completed the podium and walks away from the weekend with the championship lead.

O’Keeffe was the quiet achiever in fourth while Russell completed the top five.

Porsche Carrera Cup Australia continues at Winton Motor Raceway on May 21-22 for the second round of its season.