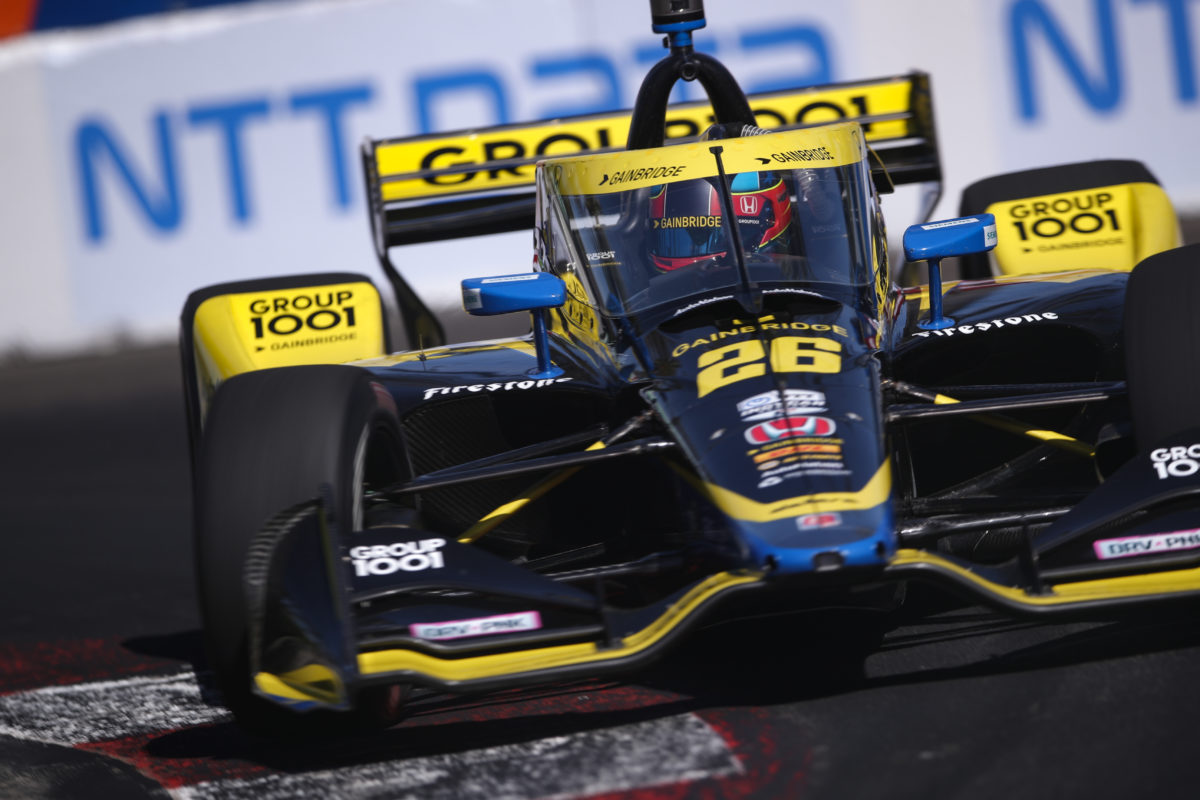 McLaughlin and Team Penske team-mate Will Power both failed to make it into the Fast Six, citing dramas with traffic as the reason for their respective downfalls.

Power ended up seventh on the grid, with Josef Newgarden the sole Penske driver to make it through to the final phase of qualifying, while Chip Ganassi Racing’s Scott Dixon did not even progress from Round 1.

Alex Palou started the final, six-minute stanza on used reds and the #10 CGR Honda driver jumped to the top with a 1:05.8667s once he switched to a set of new alternate tyres.

In the final minute before the chequered flag, Herta (Andretti w/ Curb-Agajanian) set a 1:05.3095s on lightly roaded reds and team-mate Romain Grosjean provisionally joined him on the front row by clocking a 1:05.5055s.

Grosjean threatened to go even faster again on his final lap before he crashed at Turn 5, having glanced the wall exiting Turn 4 and apparently damaged the left-rear toe link on the #28 Honda.

That triggered a red flag and, with the Frenchman stripped of his fastest lap, he dropped all the way back to sixth as Newgarden inherited second position with his 1:05.7550s in the #2 Chevrolet.

However, with two seconds left on the clock, a quirk of the IndyCar rulebook meant drivers had the opportunity to go out again for a guaranteed one extra flying lap.

Only Felix Rosenqvist (McLaren SP) and Alexander Rossi (Andretti Autosport), the latter of whom had a hot lap disrupted by Grosjean’s prang, took up the opportunity, but neither improved.

As such, it remained Herta, Newgarden, Palou, and Rosenqvist as the top four, with Rossi fifth on his earlier 1:06.0674s and Grosjean sixth without an official lap time set.

Earlier, in Round 2, Herta was fastest from Rossi, Rosenqvist, Palou, Newgarden, and Grosjean.

Power was just 0.0001s slower than Grosjean’s best, having been bumped after the chequered flag by Palou’s lap, but that was not the end of the story as stewards apparently reviewed multiple alleged impeding incidents.

After several minutes, it was ultimately decided that no further action would be taken, consigning the #12 Penske entry to seventh on the grid after all.

McLaughlin could only managed to qualify ninth in the #3 Penske entry, one position behind Marcus Ericsson (CGR), whom he later claimed held him wide unnecessarily as they set up for hot laps.

Back in Round 1, Graham Rahal (Rahal Letterman Lanigan Racing) was bumped out by Ericsson late in the Group 1 hit-out and is set to start 13th.

Jimmie Johnson (CGR), who is pressing on despite fracturing his right hand in a crash in Practice 1, qualified 25th, although he would not have advanced into the second phase anyway given he was pinged for qualifying interference of Rahal.

In Group 2, Dixon (CGR) was seventh and Power eighth when the chequered flag came.

While the latter was able to dig himself out of a hole when he subsequently went third-fastest, which bumped Helio Castroneves (MSR) out, Dixon had no more improvement in him and is due to start 16th.

The field is next on-track on Monday morning (AEST) for a half-hour Warm Up, before the 85-lap race is set to start at 05:30 AEST.