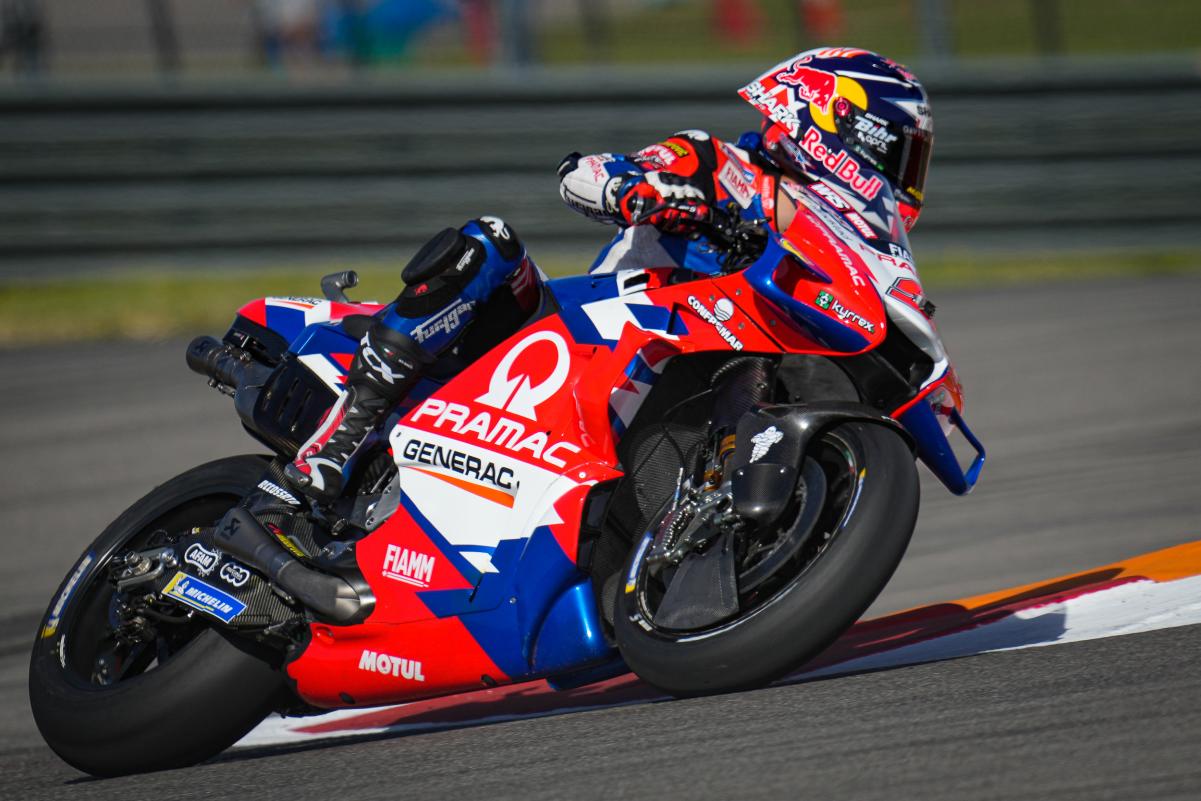 Johann Zarco has beaten fellow Ducati rider Jack Miller to the fastest lap in Friday practice for MotoGP’s Grand Prix of the Americas.

Zarco set a 2:02.542s on his Pramac Racing entry in the late time attacks in Free Practice 2 around the Circuit of The Americas, leaving him 0.247s clear of the Ducati Lenovo Team’s Miller.

While Maverick Viñales made the top 10, and hence is provisionally on for direct passage to Qualifying 2 on Saturday afternoon (local time), Aprilia Racing team-mate and championship leader Aleix Espargaro ended up 11th.

Alex Rins was fastest in Free Practice 1 with a 2:04.007s on his Suzuki Ecstar entry, and that lap was the best on combined times until the 10th minute of the second session.

Viñales split them in the 21st minute when he set a 2:03.7072 on the #12 RS-GP, riding on a hard front Michelin tyre and medium rear like the vast majority of the field.

Rins was early to switch to a soft rear tyre, using it to reclaim the ascendancy at the halfway mark of the session as he wheeled his GSX-RR to a 2:03.030s.

Francesco Bagnaia, however, was still running around on a used medium rear when he went second-quickest in the 29th minute on his Ducati Lenovo Team entry.

As such, the top five with a quarter of an hour to go was Rins, Bagnaia, Miller, Viñales, and last-start winner Aleix Espargaro.

Quartararo went to fourth on a 2:03.967s, two minutes later, in one of his last efforts before ‘happy hour’ kicked off.

Marquez jumped from 11th to second with a 2:03.041s before Miller, who opted for soft rubber on the front and rear of his Desmosedici, moved the benchmark lap time to a 2:02.789s.

The latter, in doing so, bumped Quartararo, but the 2021 MotoGP champion returned the favour with a 2:02.837s on his final lap.

As such, it was Zarco at the top of the timesheet, from Miller, Quartararo, Bastianini, Rins on his relatively early 2:03.030s, and Marquez.

It meant Aleix Espargaro’s 2:03.370s with the chequered flag out was good enough for only 11th, with brother Pol 12th on his Repsol Honda.

Also deep in the field were Monster Energy Yamaha’s Franco Morbidelli in 21st and Red Bull KTM’s Miguel Oliveira, who won the Indonesian Grand Prix two rounds ago, in 24th.