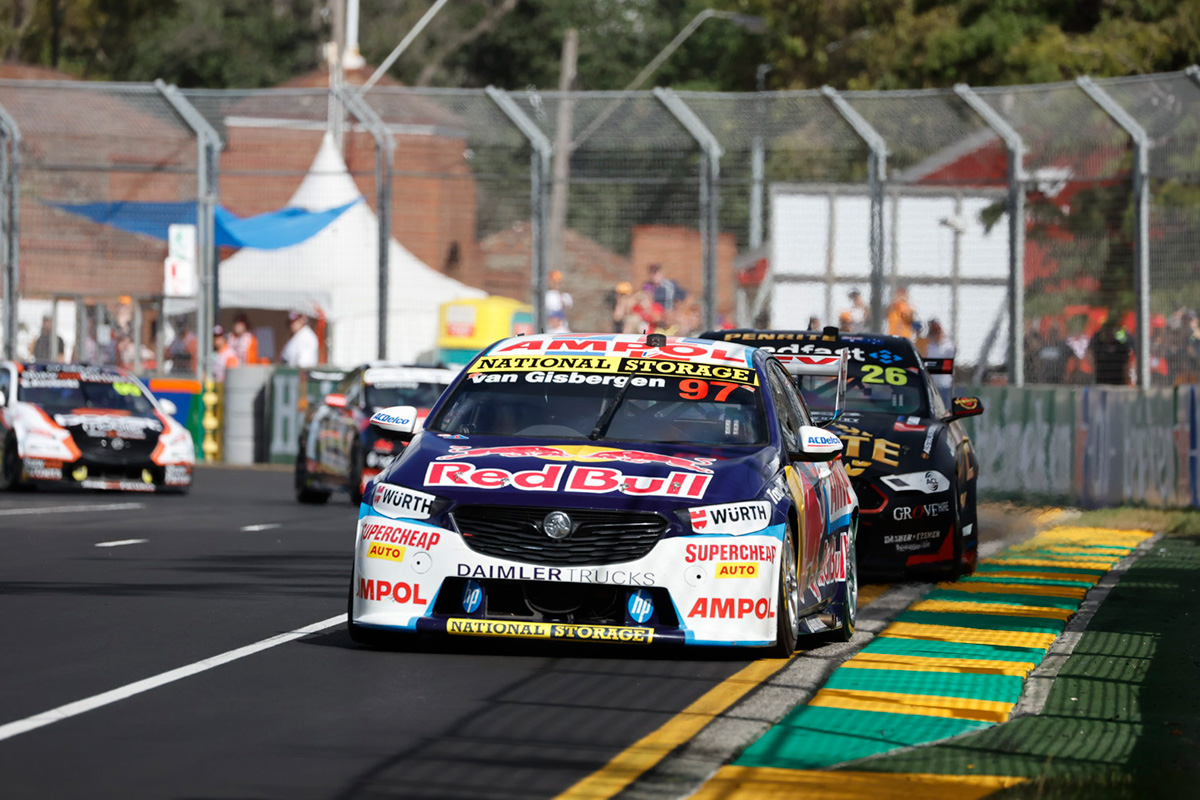 Red Bull Ampol Racing’s Shane van Gisbergen has won Race 7 at the Beaurepaires Melbourne 400 in what was another chaotic affair.

By the conclusion of an already frenetic encounter, the race reached a dramatic climax on the last lap.

At the death, James Courtney and Chaz Mostert came to blows at the final corner while battling for third, resulting in the #500 Ford Mustang spinning into the outside wall.

Mostert would cross the line fourth in the #25 Holden ZB Commodore, but was subsequently penalised for the contact and was classified 22nd in the end.

Courtney, meanwhile, would flick spin his car and take the chequered flag in 10th, but was duly promoted to ninth with Mostert’s penalty.

Off the line, Reynolds (#26 Penrite Racing) bogged down and ceded second place to van Gisbergen (#97 Red Bull Ampol Racing) while pole-sitter Will Davison (#17 Shell V-Power Racing Team) got the holeshot into Turn 1.

Come Lap 2, van Gisbergen began pressuring Davison for the lead. On the run to Turn 3, the Kiwi showed his nose under brakes. Davison duly covered, compromising his line into Turn 4.

With the criss-cross, van Gisbergen got to Davison’s outside at Turn 5, once again, compromising Davison’s line and giving the points leader a run to Turn 6 where he completed the pass.

Van Gisbergen put half a second on Davison by the end of Lap 2, leaving the Dick Johnson Racing driver to fend off Reynolds.

The latter was the first to blink, pitting on Lap 4 to get off the soft tyre. He was duly followed by Brodie Kostecki and Cameron Waters (#6 Monster Energy Racing).

Drama struck on Lap 5 when Will Brown (#9 Boost Mobile) and Andre Heimgartner (#8 R&J Batteries Racing) got together out of the penultimate corner.

Heimgartner’s Holden ZB Commodore made heavy contact with the wall, duly bringing out the Safety Car.

For Brown’s involvement in the incident, he copped a drive-through penalty.

A flurry of pit stops followed as those on the soft compound tyres made their way to the pit lane.

In the ensuing chaos, De Pasquale had to double-stack with Davison and then stalled as he sought to get out and going from his pit bay.

Those who lost out included Feeney who fell to 12th, Percat to 13th, though worst of all was De Pasquale who was 20th.

Come Lap 8, the race resumed with van Gisbergen at the head of the field, He opted to go early as the green flag flew, putting a few car lengths on Reynolds.

Behind them, Kostecki sought to go around the outside of Davison at Turn 3, which put him on the inside at Turn 4.

Kostecki dive-bombed Davison, casting them both wide on the corner exit. That gave Courtney a free-kick, allowing the driver in his 501st race start to claim third.

Kostecki maintained fourth while Davison dropped to fifth. However, there was more hurt for the Erebus Motorsport driver who got loose out of Turn 5 and opened the door for Davison to get back through.

With dirty tyres, Kostecki understeered through Turn 6 and that allowed Mostert to poke his nose up the inside through the fast sweeping right hander.

Soon enough Kostecki was usurped by Waters, Pye, and Holdsworth.

That melee continued at the final turn, light contact with Garry Jacobson sending Kostecki wide of the apex and allowing several more through.

Soon enough, Kostecki had fallen from fourth to 15th by the close of Lap 8.

Feeney found himself in trouble at the end of Lap 8, going for a tour of the gravel trap at Turn 11. He duly pitted and fell to the tail of the field.

The drama continued on Lap 10 when Waters got into the back of Davison at Turn 3, spearing the #17 off into the gravel trap. That drew the second Safety Car of the race.

Waters would cop a drive-through penalty for the incident.

While van Gisbergen and Reynolds skipped away, Courtney found himself under attack from Mostert. In the first instance, he held sway.

Jack Smith lunged Thomas Randle on Lap 16, forcing the Ford Mustang off the road at the penultimate corner.

Due to time certainty, the race fell one lap shy of the scheduled 20-lap distance.

While van Gisbergen was two seconds clear of Reynolds at the line, the battle between Courtney and Mostert heated up.

Mostert sought to go around the outside at the penultimate corner, Courtney casting the #25 wide.

Pinned to Courtney’s right rear corner, Mostert made contact with the preceding car and sent it into a spin.

The #500 would back into the tyre wall while Mostert carried on. Holdsworth, meanwhile, passed them both to snag third.

Pye fell just shy of the podium in fourth while Hazelwood and Jacobson were fifth and sixth.

Brodie Kostecki recovered to seventh having been mid-pack earlier in the race. Slade was eighth, Courtney ninth, and De Pasquale 10th.