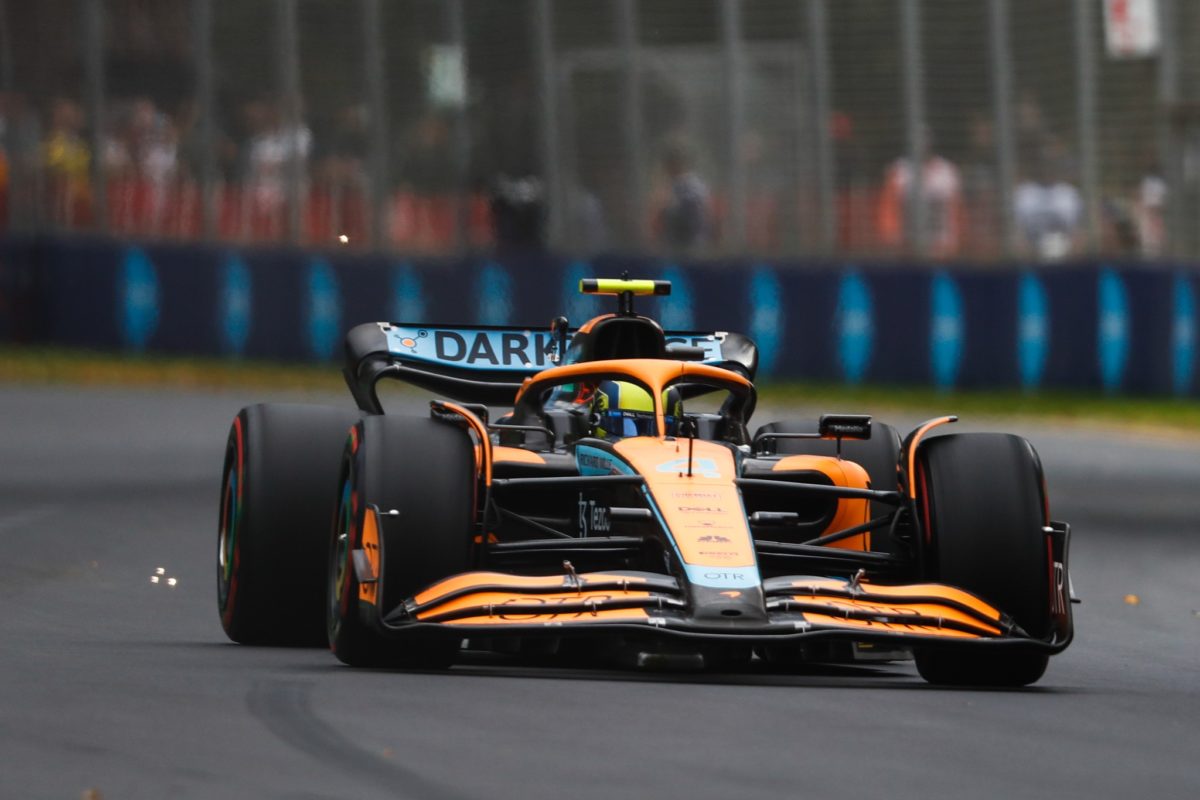 McLaren’s Lando Norris has gone fastest in a final practice session for the Formula 1 Australian Grand Prix in which both of the Aston Martins crashed.

Sebastian Vettel caused a red flag when he came unstuck at Albert Park’s flip-flop just beyond the 20-minute mark, while Lance Stroll brought a slightly premature end to Practice 3 when he understeered off and into the barriers at Ascari.

The Canadian’s prang locked Norris into first position for what was to have been an hour-long session after he went as quick as a 1:19.117s, from Ferrari’s Charles Leclerc on a 1:19.249s and Red Bull’s Sergio Perez on a 1:19.265s.

In an overcast Melbourne, it took almost 10 minutes for anyone to set a time, Norris clocking a 1:21.247s in a McLaren running on the softest compound of tyre (C5) available this weekend.

Friday pace-setter Leclerc went fastest in the 17th minute with a 1:20.689s in a soft-shod Ferrari, but only held the position for a moment before Perez laid down a 1:20.436s.

Around the time that was unfolding, Lewis Hamilton pinched a right-front at Ascari and toured the gravel, appearing to glance the tyre barrier with his Mercedes.

A red flag was triggered in the 21st minute for an even bigger mishap for Sebastian Vettel, whose Aston Martin got loose through the flip-flop and pitched him into the wall on exit of Turn 10.

As the German got a lift back to the paddock on a scooter, having found himself in hot water for riding one on the track 24 hours earlier, Alonso sat on top of the order, from Sainz, Ricciardo, Perez, and Alfa Romeo Sauber’s Valtteri Bottas on a 1:20.517s.

The rest of the top 10 at the time was Leclerc, George Russell (Mercedes), Verstappen, Norris, and Esteban Ocon (Alpine), with Hamilton 15th on a non-representative lap time, and Vettel officially 17th without a time to his name at all.

After a red flag period of just over 10 minutes, action resumed.

Verstappen looked like shifting the benchmark until he had a lazy spin at Turn 13, and it was instead Alonso who went fastest with a 1:19.906s on softs a couple of minutes later.

Another Spaniard, namely Sainz, usurped them when he set a 1:19.419s on what Scuderia Ferrari claimed was used softs, and he held sway until just over 10 minutes to go, when Norris set a 1:19.117s.

Perez had split them on a 1:19.265s by the time Stroll had his moment at Turn 11, running through the gravel and then skating into the barriers as he tried to drive out.

The red flag was called with about four minutes left, and there would be no resumption in proceedings.

With seemingly no real qualifying simulations, at least from the big guns, the top 10 for the session was Norris, Leclerc, Perez, Alonso, Sainz, Ricciardo, Verstappen, Hamilton, Bottas, and Yuki Tsunoda (AlphaTauri).

Norris had been told to abandon a lap just before the red flag came, but McLaren would advise that the instruction was due to Car #4 being low on fuel.