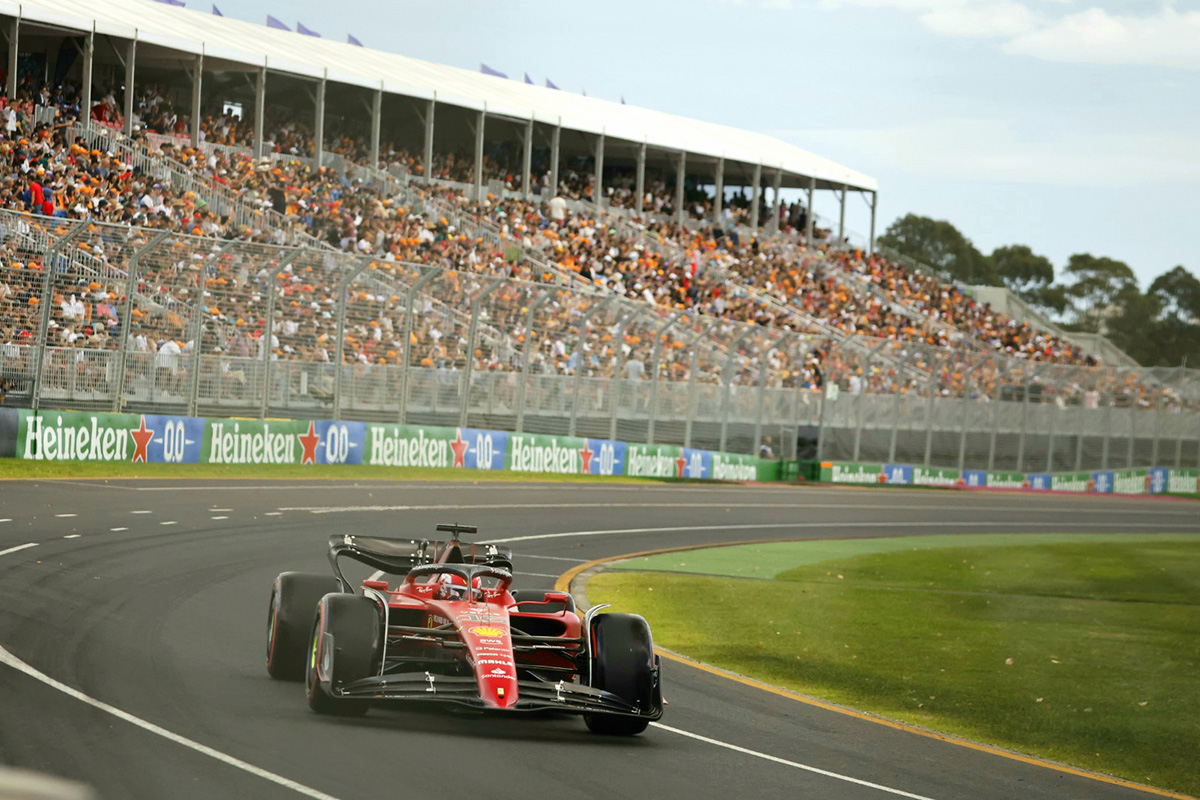 Ferrari’s Charles Leclerc has seized pole position for the Formula 1 Australian Grand Prix, by a margin of almost three tenths of a second over Max Verstappen.

Verstappen threw down the gauntlet to Leclerc when he wheeled his Red Bull to a 1:18.154s in the final minute of Qualifying 3 at Albert Park but, with the chequered flag out, the Monegasque stormed to a 1:17.868s.

Sergio Perez made it Red Bulls second and third, although he faces a post-session investigation for allegedly failing to slow for yellow flags during Qualifying 2, at Turn 11.

After neither McLaren had made Q3 in either of the first two rounds of 2022, Lando Norris put his onto the second row of the grid at Albert Park.

The Mercedes lock out Row 3, Lewis Hamilton edging George Russell, while Daniel Ricciardo qualified seventh for his home race in the other McLaren.

Qualifying ended just beyond 17:30 local time, 90 minutes after it had begun, due to red flags in Qualifying 1 and Q3, the latter caused by a crash for Alpine’s Fernando Alonso.

Verstappen had kicked things off in the final stanza with a 1:18.399s despite a small lock-up into Turn 13, but that made the difference when Perez was next through and set a 1:18.398s.

The Monegasque completed that lap barely seconds before a red flag was called due to Alonso crashing his Alpine at Ascari (Turn 11).

The Spaniard had missed the apex, careering across the gravel and into the tyre wall, although he reported a hydraulics issue and a replay would verify his claim that “I could not change gear”.

With the clocked stopped at 6:58s remaining, Leclerc was on provisional pole from Perez, Verstappen, Ricciardo, Ocon, Norris, and Hamilton, with neither Carlos Sainz (Ferrari), Russell, nor Alonso having set a representative lap time.

The session resumed at 17:25 local time, 13 minutes after it had been stopped, but only Mercedes duo Hamilton and Russell headed out again immediately.

In the final minute before the chequered flag was unfurled, Verstappen moved up two positions to first with a 1:18.154s, making up his time in the final sector.

However, it was not enough to deny Leclerc pole when he steered the #16 Scuderia Ferrari entry to a 1:17.868s.

In the short period between those two laps, Norris had logged a 1:18.703s and that would stand up for fourth.

Ocon qualified eighth and Sainz could only manage ninth in the other Ferrari with a personal-best 1:19.408s in Q3, commenting on his way back to the pits that it was an “absolute f###ing disaster”.

Sainz aborted the first push lap of his second run but then made his passage safe in clocking a 1:18.739s which moved Car #55 to third.

That became fourth once Leclerc drove his own Ferrari into second position on a 1:18.606s, in the last three minutes before the chequered flag.

With the chequers flying, Ocon lifted himself from 11th to eighth on a 1:19.136s, bumping Pierre Gasly out of the top 10, and the AlphaTauri driver could not get back in.

Sainz went back to second position on a 1:18.469s, Ricciardo crept up one spot to eighth on a 1:19.130s, and when Yuki Tsunoda (AlphaTauri) could only move up to 13th, Hamilton looked safe despite occupying 10th position at that moment.

Verstappen had gone to the top on a 1:18.580s and team-mate Perez to second on a 1:18.834s by the time Aston Martin sent Lance Stroll out for the first time with just over four minutes remaining, after a crash late in Practice 3.

They need not have bothered, given he was part of an incident with Nicholas Latifi which triggered a red flag with 2:01s to go.

Latifi had let his fellow Canadian through in the car park complex, seemingly to optimise his track position for another push lap, then began to accelerate.

As he did, Stroll moved to drivers’ right and they made right-front to left-rear contact on the run between Turns 5 and 6, with the #6 Williams entry bearing the brunt of the damage as it spun down the circuit and into the wall.

At that point, Schumacher sat immediately above the drop zone on a 1:20.104s, with the bottom five being Alexander Albon in the surviving Williams, Kevin Magnussen (Haas), Latifi, Stroll, and Sebastian Vettel.

The latter had still not gone out after he too had crashed an Aston Martin earlier in the day but, after a 15-minute pause in proceedings, the green flags flew again and the four-time world champion was dispatched from the pits.

The top seven stayed in the lane while nine of the 11 who went out made it to the control line in time to start a lap, the exceptions being the two Mercedes.

In the end, it was largely academic, with Gasly climbing from 13th to 10th, Vettel only taking up 18th with a time of 1:21.149s, and the order otherwise unchanged.

There will be a post-session investigation into the incident involving Latifi and Stroll, who ended up 19th and 20th respectively.