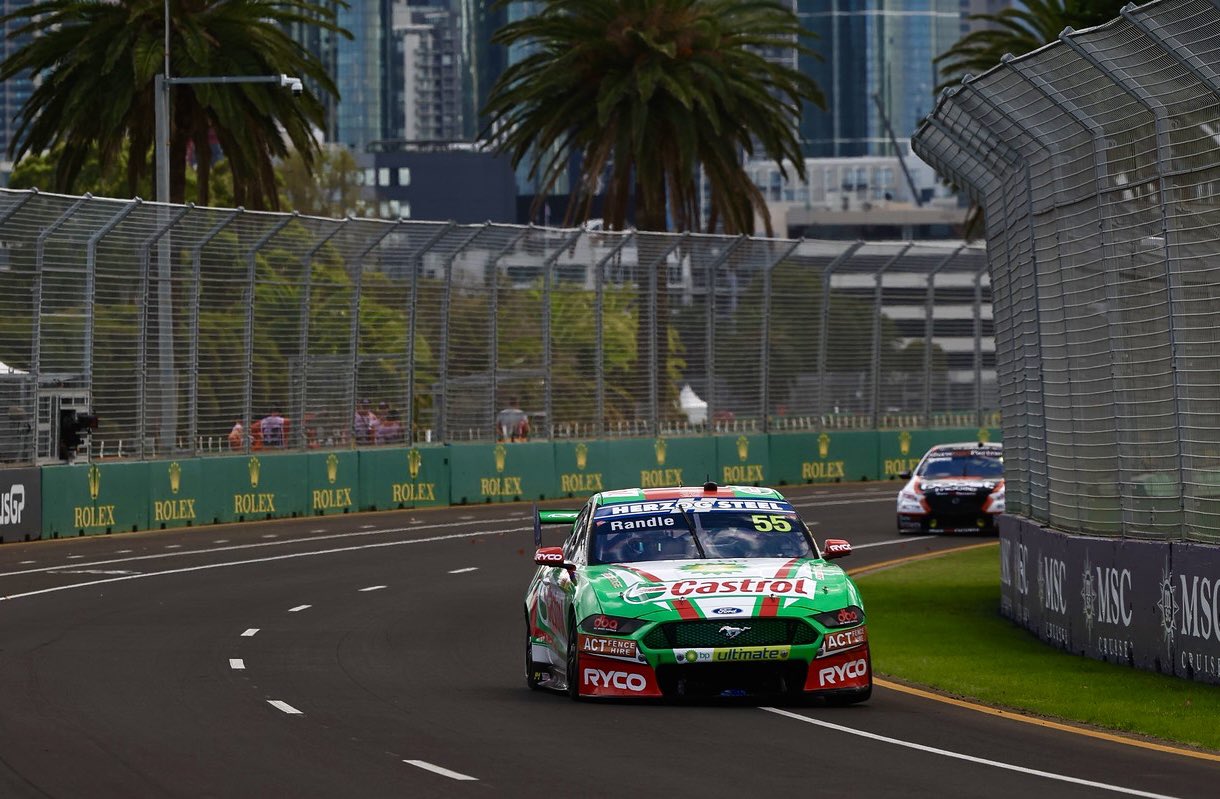 Thomas Randle was left to count his blessings after a near miss during Qualifying for Race 7 at the Beaurepaires Melbourne 400.

Tickford Racing was fortunate to end Thursday’s running at the Albert Park Grand Prix Circuit with just one wounded car.

Three of the four corners on Jake Kostecki’s #56 Ford Mustang were heavily damaged after a high-speed encounter with the Tecpro barrier at Turn 5 during Qualifying for Race 6.

That incident drew the red flag and brought the session to a premature end.

Kostecki’s crash was the second such incident with the barrier, which was only installed this year, after Broc Feeney’s meeting with it in similar fashion during Practice 1.

As a result, the Tecpro wall was subsequently removed in time for the final Supercars qualifying session of the day.

For Randle, it was a blessing in disguise after he spun on his second flying lap.

With the Tecpro wall removed, only the rear wing of the #55 Castrol Racing Ford Mustang would lightly graze the existing tyre wall.

If not for its removal, Randle feared a Kostecki-esque repair job would have been on the cards.

“If the Tecpro was there, the end result wouldn’t have been as good,” Randle, who later would hand his Supercar over to two-time Formula 1 champion Fernando Alonso, told Speedcafe.com.

“I just turned in late and got in the dirty line. As simple as that, driver error. I knew straight away that it was gone, I just tried to slow it up as much as possible.

“I was just stuck there. I couldn’t see if there were cars coming or not, but luckily didn’t get t-boned and then I ended up doing a lap after that to put a lap down, but the tyres were like 50 cent pieces.

“Just circulated essentially. Just sorry to the team really and all the partners that I made a mistake that cost us that session.”

All told, it was a mixed day for Randle.

In the first qualifying session, he would wind up ninth. However, after his double misdemeanour, 23rd was all he could muster in the following hitout.

“Quali 1 was really good, getting in the top 10 for the first time in my solo career, so that was really positive,” he said.

“I probably underdrove slightly, in hindsight I probably should’ve done a little bit more in Quali 2.

“In the second quali I got track limits on the first run and on the second run I had a major brown pants moment through Turn 5.

“Very, very fortunate that I didn’t damage the car there. That was the end of that session.

“Up and down day, getting my best quali and then basically my worst quali.

“The good thing is the speed is there, it’s just that I need to not make those mistakes.”

Supercars will be back out on track at 09:40 AEST today when Qualifying for Race 8 gets underway.