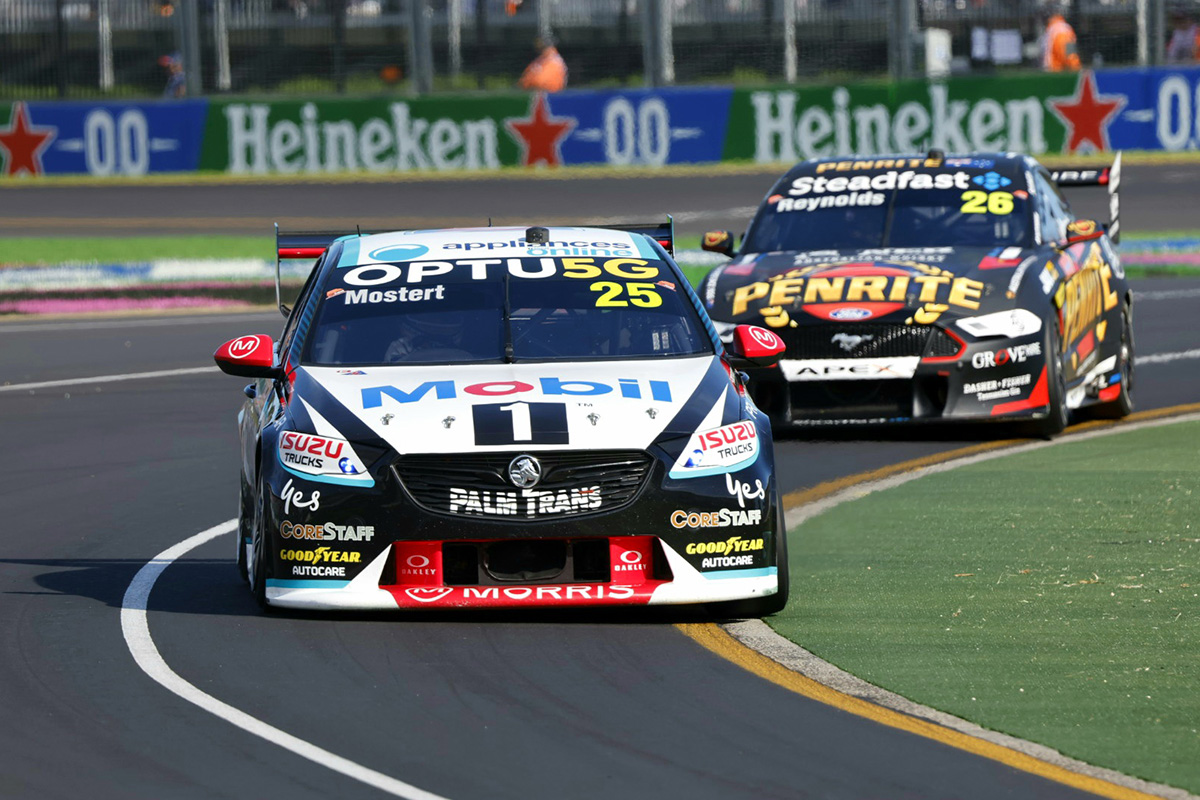 Although the expectation going into the Beaurepaires Melbourne 400 was that tyre degradation wouldn’t be extreme considering the new surface, delamination proved to be a major issue.

Mostert, who started third and made quick work of pole-sitter David Reynolds, romped home to an eight-second win over the Penrite Racing driver.

On the grid, there were 12 who started on the soft compound tyre and 13 on the hard compound.

From the clean side of the road, Reynolds got the jump. Mostert followed suit, sweeping around the outside into Turn 1 to take second place away from Anton De Pasquale (#11 Shell V-Power Racing Team).

Percat looked to make hay with his soft tyres, lunging down the inside of Davison into Turn 3. The 2011 Bathurst 1000 winner sent smoke signals as he locked up, trying to arrest his car.

At the start-finish line, Percat passed De Pasquale for third, putting the soft runners one, two, and three.

Van Gisbergen made early headway, rising from 23rd to 16th at the end of Lap 1. He continued that charge, muscling his way around the outside James Courtney (#500 Flex Power Tools) and Will Brown (#9 Boost Mobile) to 14th.

Brodie Kostecki (#99 Boost Mobile), Thomas Randle (#55 Castrol Racing), and Todd Hazelwood (#35 Truck Assist Racing) were the first to blink and pit at the end of Lap 2 for their compulsory pit stop.

Reynolds soon found himself under pressure from Mostert, and come Lap 3, the rear gunner sought to go down the inside at the penultimate corner.

Although the Penrite-backed racer looked to have the pass covered, he soon lost the rear of his car at the final turn and opened the door for Mostert to make his way through.

Reynolds continued to haemorrhage positions early on, this time losing out to Percat on Lap 6. By Lap 7, Jones had rounded him up at Turn 11, as did Slade. By the end of the lap, Reynolds made his way to the pits behind Mostert.

Having pitted early, De Pasquale and Davison executed an undercut, usurping Mostert to sit one and two.

With the pit stop sequence cycled through, De Pasquale led Davison to the tune of 1.8s.

Mostert was third, Brodie Kostecki fourth, and Holdsworth fifth with the top 10 completed by Waters, Reynolds, Brown, Jones, and Percat.

Brown and Hazelwood both pitted on Lap 11 for another set of tyres and set off a chain reaction of drivers who would pit twice during the 20-lapper.

Such was the punishment for the soft tyre, Mostert soon found himself under the rear wing of Davison for second. That pass would come to fruition at the penultimate corner with nine laps remaining.

The race came to a head with seven laps to go when Mostert walked up to the rear of De Pasquale. By Turn 11, the pass was done and the lead was Mostert’s again.

Several drivers worked themselves out of contention by having to perform a second pit stop.

The fight for fifth on the road began to heat up, headed initially by Jones. However, Percat and van Gisbergen soon found their way through.

Drama struck with four laps remaining when De Pasquale’s left front let go into Turn 1, resulting in the #11 skating through the gravel.

Whilst squabbling amongst themselves, Percat and van Gisbegren came upon Davison at the high speed Turn 9.

In doing so, van Gisbergen got by Percat, casting Davison wide who understeered into the grass. Moments later and he was called into the pits.

Ultimately, Mostert would cruise across the line to take victory. Reynolds was second despite a late challenge from van Gisbergen.

Slade took fourth, ahead of Percat and Jones, who secured a career-best solo result in sixth. A little further back, Jacobson (ninth) took the first top 10 result for PremiAir Racing.

DJR duo Davison and De Pasquale were left to come home in 16th and 23rd, respectively.

Supercars return to the track tomorrow for Race 7 from 10:25 AEST.