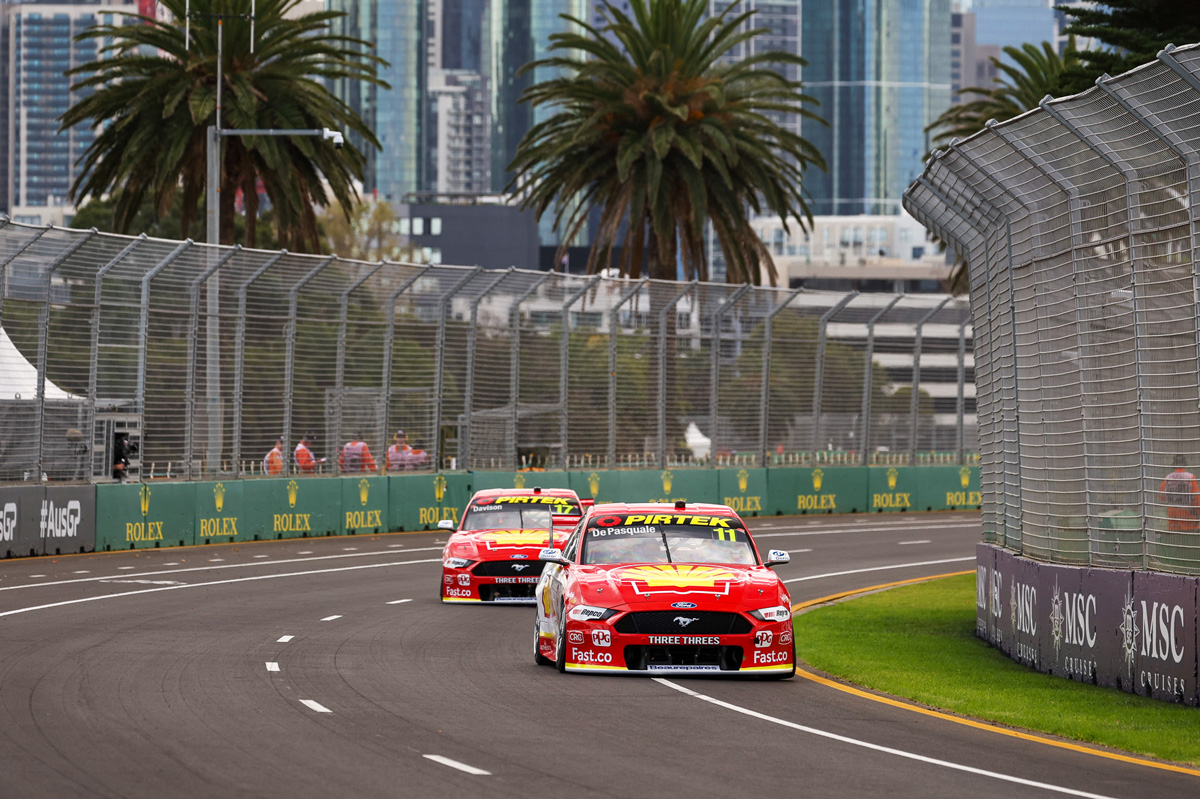 Shell V-Power Racing Team stable-mates Anton De Pasquale and Will Davison will start on pole position for Race 8 and Race 9 respectively at the Beaurepaires Melbourne 400.

However, the standout was Castrol Racing’s Thomas Randle who qualified fourth for the final race of the weekend.

That was quickly usurped by Chaz Mostert (#25 Mobil 1 Optus Racing), who was the first into the 1:46s bracket, edging Courtney out by just under four tenths.

The times continued to tumble and after the first flying lap it was Mostert who led Tim Slade (#3 CoolDrive Racing), Bryce Fullwood (#14 Middy’s Racing), Lee Holdsworth (#10 Penrite Racing), and Courtney.

Courtney’s second lap took him back to the top, although van Gisbergen (#97 Red Bull Ampol Racing) immediately edged ahead by a mere three hundredths.

As the session wore on, the order duly shuffled. David Reynolds (#26 Penrite Racing) went to the top on a 1:46.6551s though that was quickly eclipsed by Anton De Pasquale (#11 Shell V-Power Racing Team) to the tune of eight tenths.

Van Gisbergen was a late charger, fighting back to third, albeit nearly 0.6s adrift of the leading Ford Mustang pair.

“We felt good on the hard tyre yesterday, a bit better than the soft,” said De Pasquale.

“The times between the two tyres is not too much different so we’re making that tyre work really well, but the race is probably going to be won on the soft, so we still have got a bit of work to do.”

The session wasn’t without a dose of drama as Hazelwood lost control of his car at the hot spot Turn 5, subsequently swiping the outside tyre wall.

That tore the left rear door skin from the Holden ZB Commodore, doing enough damage to rule him out of the final qualifying session.

Qualifying for Race 9 began with Courtney once again setting the pace, though that was quickly beaten and the Tickford Racing driver dropped down the order.

At the first time of asking, it was De Pasquale who led proceedings on a 1:45.6089s followed by Davison, Mostert, Slade, and van Gisbergen.

After Hazelwood’s drama in the preceding sessions, Truck Assist Racing team-mate Jack Le Brocq understeered into the wall at Turn 7, bringing him to the pit lane.

The Shell V-Power Racing Team drivers again duked it out at the second time of asking; De Pasquale took top spot only for Davison to edge ahead by a mere 0.0071s at the end.

“The car was super predictable, really well balanced and it was just down to trying to get those hundredths out of yourself,” said Davison.

“I really enjoyed that, just didn’t want to touch the car, just get everything out of myself and that last one, I took a few extra risks in the braking zones and pulled off a good lap.”

He’s now determined to convert in race trim: “That’s definitely where our thoughts are. The cars are exceptional but we know at times this year, we have been very strong in qual and maybe not as good in race trim.

“Obviously we are really focused on the race and how we play it out.”

Mostert would come up to third in Qualifying for Race 9, though the biggest shock came from Thomas Randle (#55 Castrol Racing) who was among the last across the line to claim fourth.

The first race of the weekend, Race 6, gets underway at 14:20 local time/AEST.