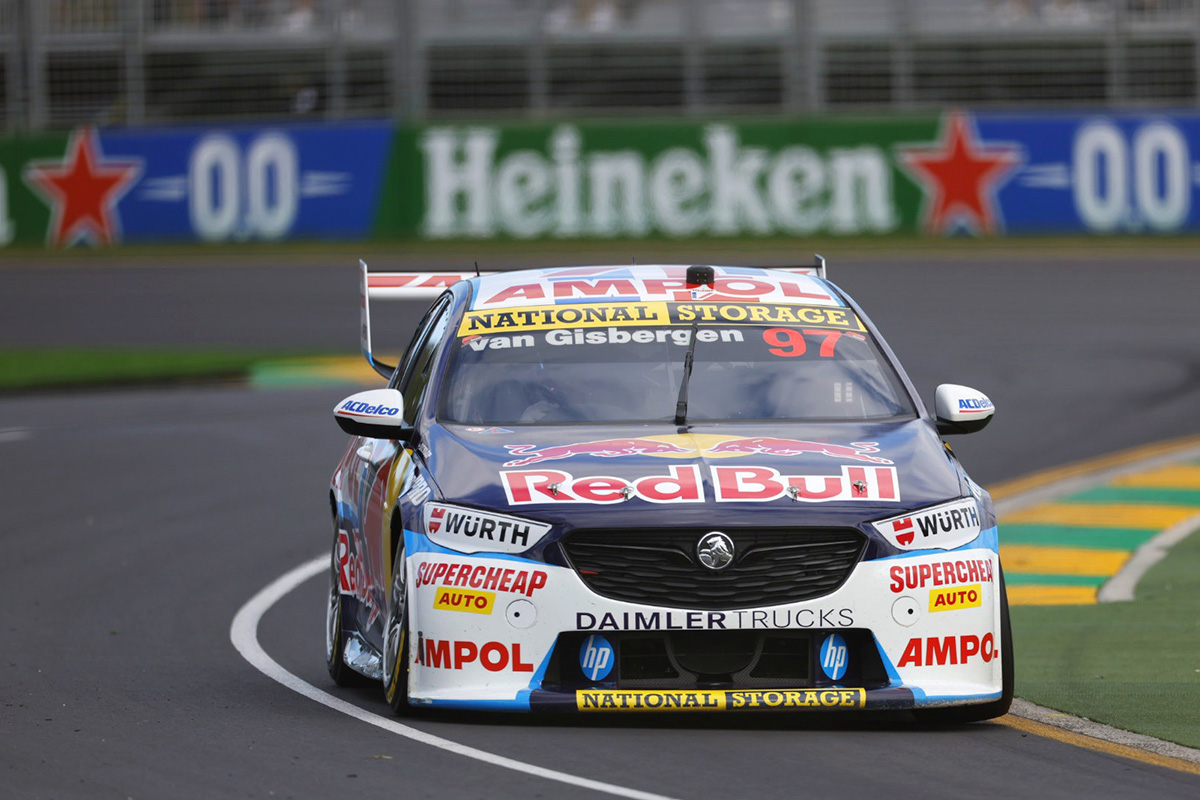 After Anton De Pasquale’s (#11 Shell V-Power Racing Team) record-breaking efforts in Practice 1, that momentum continued into the second outing with the best lap another 1.7s faster than the morning’s previous best.

Van Gisbergen and James Courtney (#500 Flex Power Tools) were the sole operators to drop into the 1:44 bracket in the 30-minute session around the Albert Park Grand Prix Circuit.

Despite the quick turnaround between sessions, Broc Feeney (#88 Red Bull Ampol Racing) rolled out onto the track two minutes into the session.

All told, he would clock 11 laps in Practice 2 and end up a lacklustre last – 3.2815s off the pace of his chart-topping team-mate.

In what was an incident-free session, Brodie Kostecki (#99 Boost Mobile Racing) was the first of those to explore the track limits at Turn 1 as he toured the grass run-off on his first flying lap.

Cameron Waters (#6 Monster Energy Racing) was the best of those initially on the hard compound tyre, although he was nearly eight tenths adrift of the best effort.

Macauley Jones (#96 Tools.com Racing) continued his Practice 1 form, his first effort putting him fourth and only 0.2s away from fellow Commodore pilot Pye.

Todd Hazelwood (#35 Truck Assist Racing) locked up under brakes at Turn 9 in the early going, skating through the grass as a result.

While most of the field lay idle in pit lane at the 10-minute mark, Courtney pressed on and duly dropped into the 1:45s bracket with a 1:45.9373s to clear Pye by six tenths.

Courtney’s team-mate Waters, shod with the soft compound tyres, went fastest to Sector 1, only to lock up at the penultimate corner. Despite that, he rose to third from 13th.

The 2010 Supercars champion duly responded, a 1:45.6084s just moments before the 20-minute mark putting him back on top.

The 2017 Bathurst 1000 winner was fastest through the third sector, despite the dirt drop.

With two minutes remaining, Thomas Randle (#55 Castrol Racing) set the fastest time to Sector 1. He would continue on, climbing from 23rd to first on a 1:45.5611s.

In the end, it was van Gisbergen who led proceedings from Courtney, and Mostert.

De Pasquale was the best of those on a hard compound tyre in fourth from Davison, Randle, Pye, Percat, Jake Kostecki (#56 Tradie Racing), and Reynolds.

The first of two qualifying sessions to determine the grid for Race 6 gets underway this afternoon from 15:00 AEST.