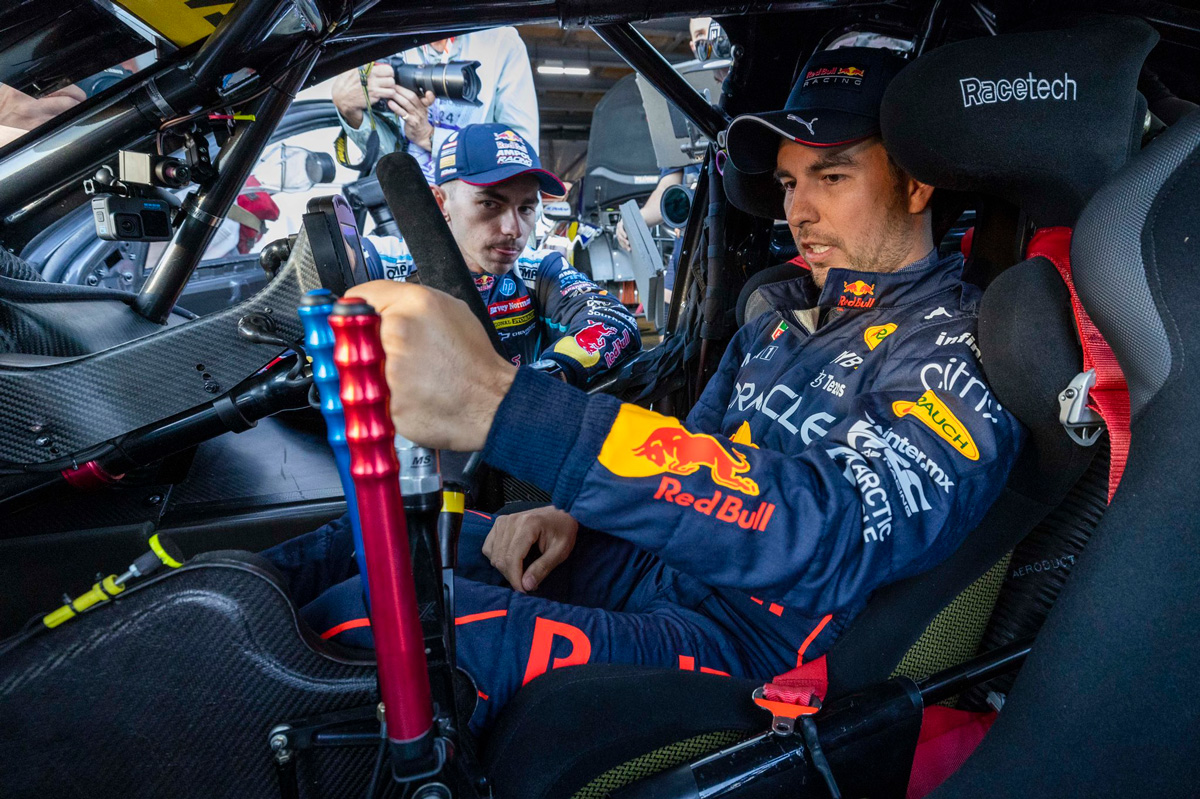 Sergio Perez lapped up his first taste of Supercars at the Albert Park Grand Prix Circuit, cutting a handful of laps in a Holden ZB Commodore.

Perez and fellow Formula 1 driver Fernando Alonso cut their first laps of the circuit this evening.

Donning the #11 which he runs in Formula 1, the Mexican relished the opportunity to explore the limits of the newly-reconfigured circuit.

“I was surprised by the amount of rolling the car has just on the straights,” said Perez when asked of his first impressions.

“It was rolling quite a bit, so I was getting used to that sensation and the braking was the biggest challenge out there.”

Pressed on what surprised him most, he replied, “I think the braking. The braking efficiency, cornering, the corner speed is quite different.

“But also, it’s very good fun the amount of kerb you are able to take. In Formula 1 you are very limited with that and here you pretty much are able to use the whole track.

“It’s quite tricky. It was quite an experience. It was really good fun.”

Although accustomed to the open cockpit of Formula 1, the two-time grand prix winner was surprised by the airflow.

“If anything, you have a lot of air coming through,” said Perez, who was sporting an open-face helmet.

“I was having something through my eyes because you have a lot of air coming through. I think in that regard it is not too bad, but I only did a few laps.”

Although not able to get much of a read of the newly-laid asphalt, Perez said he is eager to try the revised Albert Park layout tomorrow.

“It was very nice. I’m looking forward to driving it tomorrow in the Formula 1 car.”

Perez was supported by first-year Supercars full-timer Broc Feeney, who was on the radio throughout.

The 19-year-old was happy to see the car back in the pit lane by the session’s end.

“Well, it’s back in one piece so that’s fantastic,” said Feeney.

“He killed it. The biggest thing was, hopefully he got to drive something different, experience what we have in Australia, and it looks like he had a pretty big smile on his face.”

Perez somewhat tentatively cut laps of the circuit, in stark contrast to Alonso who wasn’t afraid to hold back with Thomas Randle at his side.

Asked where Perez might be able to improve, Feeney said it was only a matter of track time.

“He was explaining the roll of the car is very different, braking, so I think [with] a few more laps he’d be a bit more confident,” Feeney explained.

“He’s one of the best drivers in the world so I’m sure he would get the hang of it.”

The opening session of the Formula 1 Australian Grand Prix, Practice 1, gets underway at 13:00 local time/AEST.