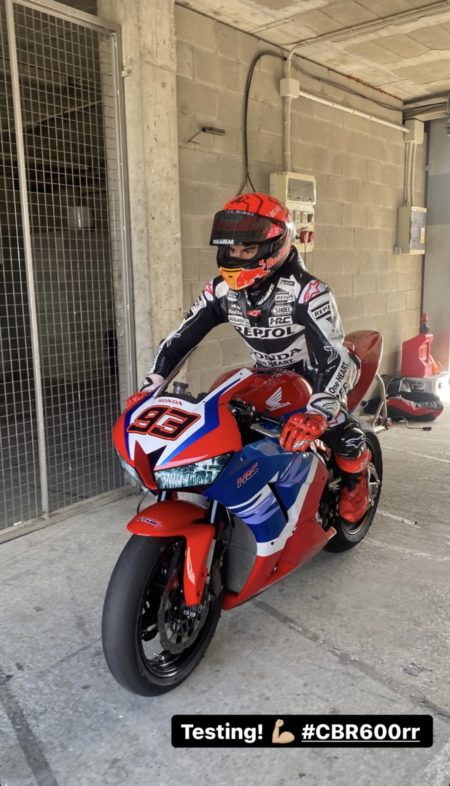 Marc Marquez has hinted he could return to MotoGP action at this weekend’s Grand Prix of the Americas after apparently riding a Supersport bike again. 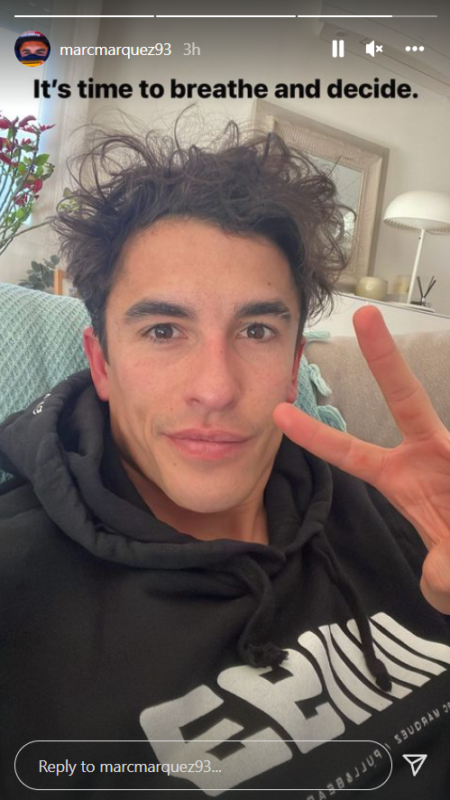 Marquez missed the Indonesia race after a huge Warm Up highside left him with concussion, before a recurrence of diplopia (double vision) saw him ruled out of last weekend’s Gran Premio Michelin De La Republica Argentina.

Now, however, it seems he has ridden a Honda CBR600RR in the last 24 hours, and is considering whether or not he will race at the Circuit of The Americas, based on two Instagram stories posted by the man himself.

The first of those shows Marquez aboard a CBR600RR in a Honda Racing Corporation livery, largely matching that which he rode at Aragon when he overcame diplopia in the last off-season.

That story is captioned with “Testing! [Flexing arm] #CBR600rr”, and it should be noted that the leathers which Marquez is wearing are a match for his 2022 pre-season gear, including the new HRC logo which was unveiled to the public on January 14.

Furthermore, the motorcycle appears to have the new HRC logo in the place where the old logo sat on the machine which he rode at Aragon in January.

The Spaniard’s second story is a selfie, apparently taken at his home, which is captioned, “It’s time to breathe and decide”.

The Repsol Honda Team has made no announcement yet regarding the apparent test, nor whether or not its talisman will race in Round 4 of the MotoGP season, days from now.

Factory Honda team principal Alberto Puig stated at Termas de Rio Hondo last weekend that he expected Marquez’s comeback from diplopia to be quicker this time than the last.

“It’s quite optimistic, but realistic also, to think that his recovery period will be shorter than last time,” the former racer told MotoGP’s official website.

Puig also declared there would be no need for Marquez to go through the process of riding as many bikes as he did in January, when he was also on a motocross bike initially, then the roadgoing version of his RC213V MotoGP bike, and finally the Supersport machine.

That #93 seems to be considering a comeback after just the one Supersport ride is consistent with those comments.

If it does not come to pass that he saddles up this weekend in Texas, test rider Stefan Bradl would presumably continue in the fill-in role which he reprised last time out.

Bradl has entered almost as many grands prix as Marquez since the start of the 2020 season, when the six-time premier class champion badly broke his right arm and did not race again until early in the 2021 campaign.

Practice at the Circuit of The Americas starts in the early hours of this Saturday morning (AEST).