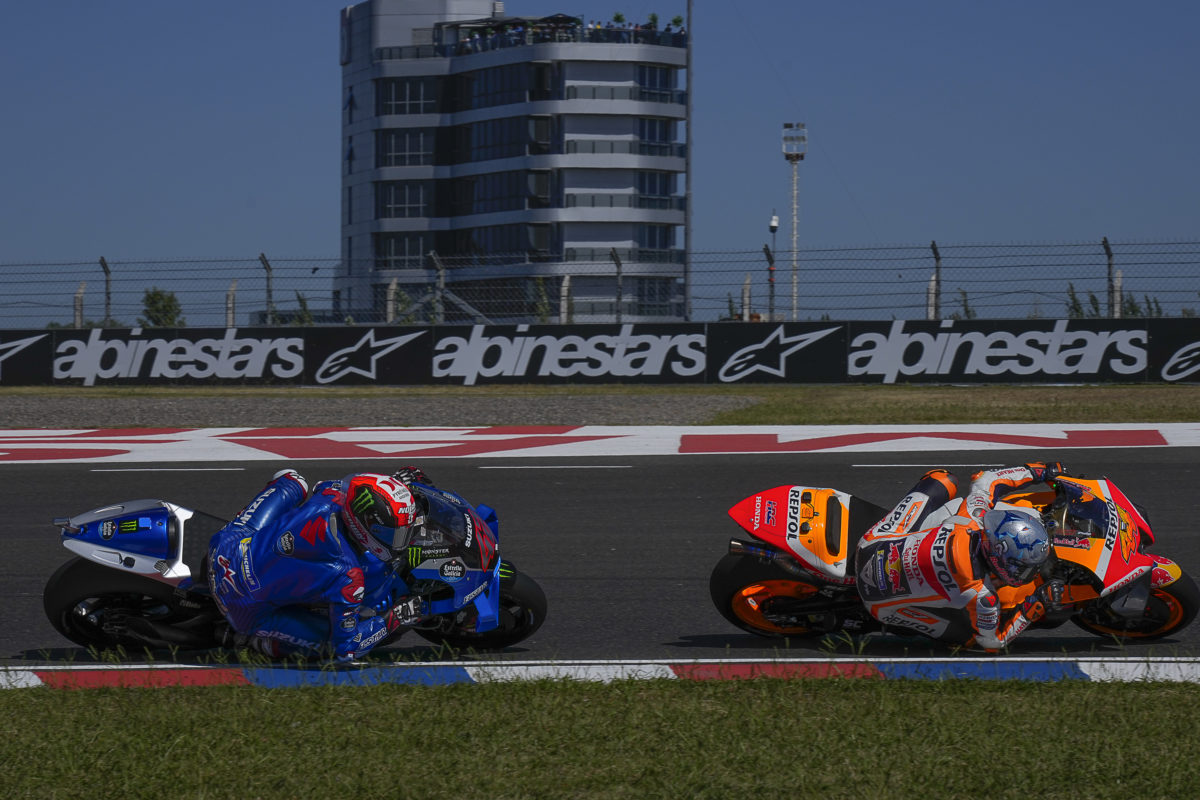 After two years away due to the COVID-19 pandemic, the world championship returned to South America last weekend, when Aleix Espargaro took a historic victory for Aprilia.

Espargaro, along with fellow podium finishers Jorge Martin and Rins, were asked about Termas de Rio Hondo’s bumps, with the latter revealing that the matter had been discussed by riders in the Safety Commission on the afternoon prior.

“It was so hard to pass through them,” said the third-placed Suzuki Ecstar rider.

“In the end, I think you get used to it.

“For me, it was more hard [with] the traction, the grip level on track than the bumps.

“Already in the Safety Commission, we talked to do something because it’s already a little bit on the limit for the next year.

“But yeah, I think was more difficult, the traction than the bumps.”

Espargaro suggested that the lack of grip might have been caused by the relatively high temperatures, or the discrepancy between the Michelin tyres which MotoGP uses and the Dunlop rubber on which Moto2 runs in the preceding race of grand prix weekends.

“It was very difficult, sincerely; the Aprilia and the bumps are not very friendly, and I struggled quite a lot during the weekend,” he said.

“Also, to use the rear [ride] height device was very, very difficult with these bumps.

“But the most difficult thing today, I think… I don’t know if for the track temperature or for the Moto2 race, but to deal with this low track grip was very, very difficult for everybody, I think.”

Pramac Ducati rider Martin said, “For me, on the bumps, you have two choices; you can try to get used to the bumps like we did in Austin last year, or you can try on the set-up to change something for stability.

“But, I prefer to try to get used to the bumps and it is the best way to be faster.”

Ironically, Austin is the next stop on the calendar, this coming weekend, for the 2022 Grand Prix of the Americas.

It was last October that riders essentially delivered an ultimatum regarding the bumps at the Circuit of The Americas, with eventual world championship winner Fabio Quartararo describing it as a “joke” more akin to a motocross track.

Much of the track, which also hosts Formula 1, has since been resurfaced in time for the return of MotoGP, although another venue has now become a problem.

There are calls for Indonesia’s Mandalika circuit, which only opened last year, to be resurfaced yet again after it broke up during last month’s grand prix.

A partial resurface had only just been rushed through in the five weeks between pre-season testing and the race event, due to riders being hit by loose stones, but that problem reoccurred when MotoGP returned.

Practice for Round 4 in the United States starts this Saturday morning (AEST).