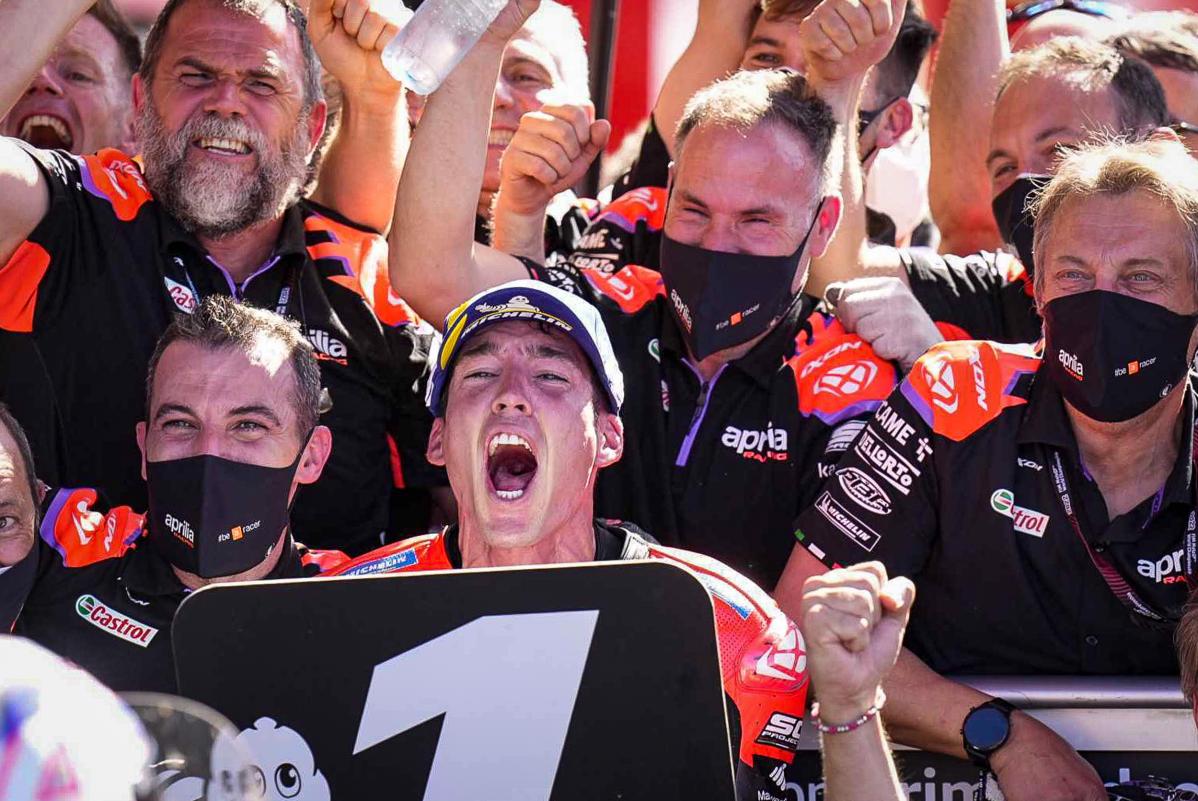 Aleix Espargaro has hailed his victory in the Gran Premio Michelin De La Republica Argentina a “huge step” for Aprilia, if not so much for him personally.

The Spaniard had already delivered Aprilia its first pole position in the MotoGP era at Termas de Rio Hondo and, less than 24 hours later, converted that into a breakthrough in the premier class for himself and the Noale manufacturer.

While it was a landmark moment for Espargaro in precisely his 200th MotoGP race start, and puts him on top of the riders’ championship, he said it would mean more for the men and women in the garage and back at the factory.

“Obviously I’m extremely happy to win the race but nothing changes,” explained #41.

“I’m a very lucky person. My job is my passion, I have a dream family, I have everything that a man can dream [for], so, sincerely, a victory doesn’t change so much on my life.

“But, for everybody in Aprilia, I think it is a huge step, because six years ago, when I finished with Suzuki and I signed up for Aprilia, nobody believed in that project.

“So, step by step, what they achieved, working very hard, is unbelievable.

“Their bike is leading the championship after pole position and winning a race, so not just for me, but for everybody in Noale, for Colaninno family [of Piaggio Group CEO Roberto Colaninno], for everybody from Aprilia and our group, I’m very, very, very happy.”

Aprilia had been the easy-beats of MotoGP until recently and, for now, is the only manufacturer which still enjoys development concessions.

However, Espargaro’s third placing in last year’s British Grand Prix was also a breakthrough for the MotoGP era at that time, and he started 2022 with confidence.

“Since Qatar [Round 1] I felt… Well, even in the in the pre-season, I felt that I had the best machine I ever had in my career,” he recalled.

“Obviously, in the pre-season, it’s very difficult to judge if this bike will allow you to fight for a top 10, top five, or to win, but I’ve been very close to the to the fastest guys in every pre-season test.

“Also in Qatar, felt strong, so step by step, we showed our potential.

“Today hasn’t been a wet race or lucky race, or whatever. I think yesterday we proved that we were the fastest on the qualifying and also today in the race, and we are leading [the championship], so this is like a dream.

“So, I’m extremely happy, not just for myself, but also for everybody in Aprilia, in Noale, and for my family, because I’m 32, but finally I arrived, and I think I deserve this.”

After a start to the season which has seen nine different riders finish in as many berths on the podium (three in each of the three races to date), it is Espargaro who has jumped from seventh to first in the championship, seven points up on Red Bull KTM’s Brad Binder.

He is cautiously optimistic about keeping that up for the duration of the season.

“It’s going to be very difficult but we are in the in the mix, in the fight for the victory, that’s for sure,” declared Espargaro.

“As I said before, it’s not a lucky race or wet race; I think we really deserve this.

“So, feet on the ground, that’s for sure – the championship is extremely long this year – but yes, if we don’t make any mistake, we will be in the mix for the victories, for the podiums every weekend, and I will try my best.

“I’m more focused than ever; very, very happy for today, but already thinking in America, in Portimao, in Jerez [next three rounds], because I would really like to keep the momentum.

“I’m in the last part of my career, for sure, because I’m 32 years old, so I want to finish in the best way possible.”

Maverick Viñales finished seventh on the other Aprilia Racing entry at Termas de Rio Hondo, and currently sits 13th in the championship in his first full season with the squad.