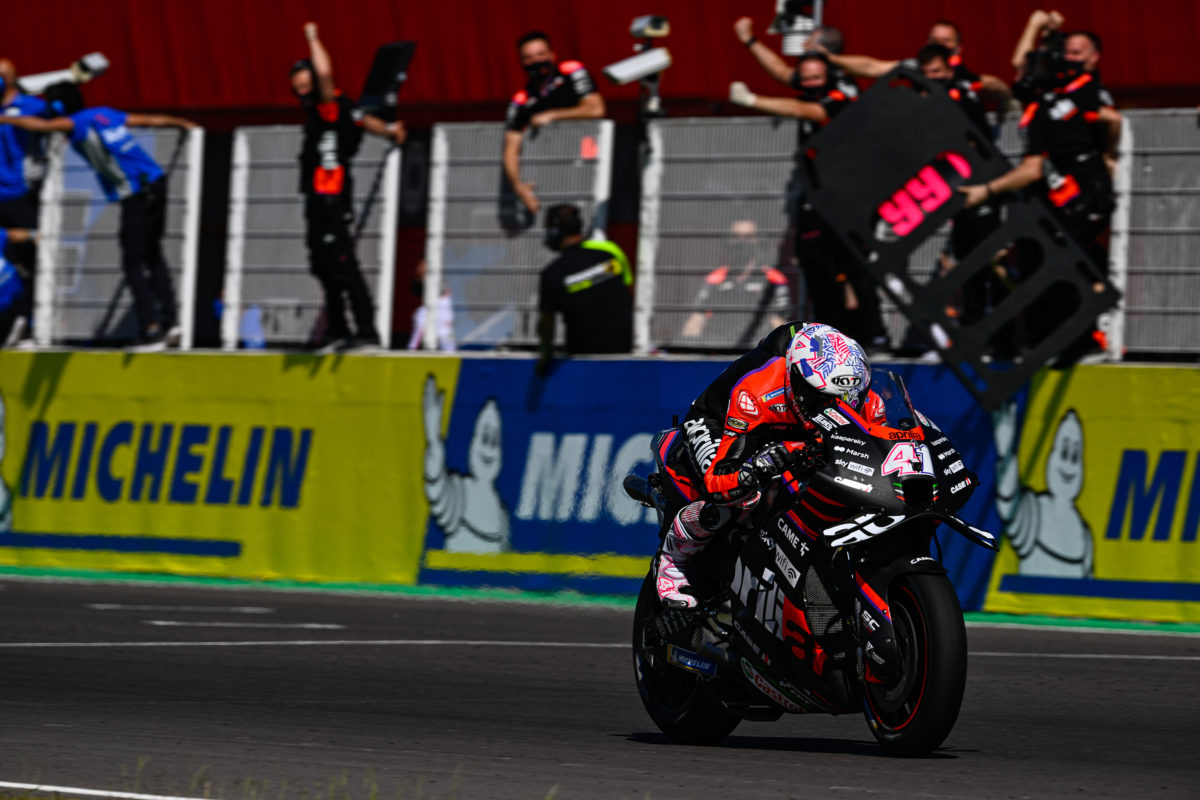 Aleix Espargaro has achieved a first MotoGP race win for himself and Aprilia, in the Gran Premio Michelin De La Republica Argentina.

Espargaro had qualified on pole position and shadowed Jorge Martin for much of the race at Termas de Rio Hondo, before decisively passing the #89 Pramac Ducati inside the final five laps.

The result means that #41 has also taken over the world championship lead, with a seven-point gap to Red Bull KTM Factory Racing’s Brad Binder.

The Suzuki Ecstar entries finished third and fourth on the day, Alex Rins just over a second from the top two and half a second up on Joan Mir at the chequered flag, with the Ducati Lenovo Team’s Francesco Bagnaia rounding out the top five.

At the start, Martin led the field to the first corner, with Aleix Espargaro emerging in second position and Luca Marini (Mooney VR46 Ducati) third for the initial run down the back straight.

Pol Espargaro (Repsol Honda) sat fourth having challenged for second at the first braking zone and Rins was fifth, but Fabio Quartararo (Monster Energy Yamaha) had been shuffled back from sixth on the grid to ninth.

Pol Espargaro eventually made a move on Marini stick on Lap 2 of 25, and Rins relieved the VR46 rider of fourth position on Lap 4 at Turn 5.

Quartararo had dropped out of the top 10 and into a battle with Johann Zarco for 12th when the Pramac Ducati rider handed back that position with a front-end crash on Lap 6 at Turn 2.

Mir went by Marini for fifth position on Lap 6, before Pol Espargaro ceded third spot to Rins when he ran wide at Turn 8 on Lap 7, by which time the top two of Martin and Aleix Espargaro were two seconds up the road.

Marini continued his slide down the order as he found himself in a dice with Maverick Viñales (Aprilia Racing) over sixth, which allowed Bagnaia to close up on them after starting only 13th, with Brad Binder (Red Bull KTM) also joining the train.

As that battle went on, Aleix Espargaro dropped to about a second behind Martin with a ropey 10th lap, but quickly caught back up to the #89 Ducati.

Pol Espargaro was essentially running on his own in fourth position when he went down on Lap 15 at Turn 2, with Mir inheriting his position.

The spill also meant that it was Viñales, Bagnaia, and Binder in fifth through seventh, all having by then overtaken Marini, and Quartararo was finally top 10 again.

Pre-race championship leader Enea Bastianini (Gresini Ducati) overtook Marini for eighth on Lap 16 at Turn 5, but could not pull up in time and was back to 13th by the time he exited the corner.

The lead changed on Lap 18 when Aleix Espargaro got a better run off Turn 4, but he outbraked himself at the end of the back straight and immediately handed the place back to Martin.

The same unfolded on Lap 20, but Aleix Espargaro got the move done another lap later again when he got the run on Martin and made it a block pass at Turn 5.

Meanwhile, third-placed Rins had narrowed the gap to the bike in front to about one second, Quartararo was up to eighth, and Marco Bezzecchi had not long passed VR46 team-mate Marini for ninth.

Martin continued to tail Aleix Espargaro in the final laps but did not quite have enough to mount a challenge to reclaim first position, and ultimately took the chequered flag 0.807s in arrears.

Rins finished 1.330s back from victory in third, and Mir another 0.501s behind, while Bagnaia and Binder made late passes on Viñales to take fifth and sixth respectively.

Behind Viñales in seventh, the top 10 was rounded out by Quartararo, Bezzecchi, and Bastianini.

Jack Miller (Ducati Lenovo Team) was seemingly stuck in 14th position all day, having started from there after a grid penalty and also finished there.

Franco Morbidelli (Monster Energy Yamaha) had a setback of his own in the form of something pertaining to the rear wheel or tyre on #21 which prevented him from finishing at all, while Fabio Di Giannantonio (Gresini Ducati) joined Pol Espargaro and Zarco as crashers.

Round 4 is the Grand Prix of the Americas, at the Circuit of The Americas, next weekend (April 8-10, local time).