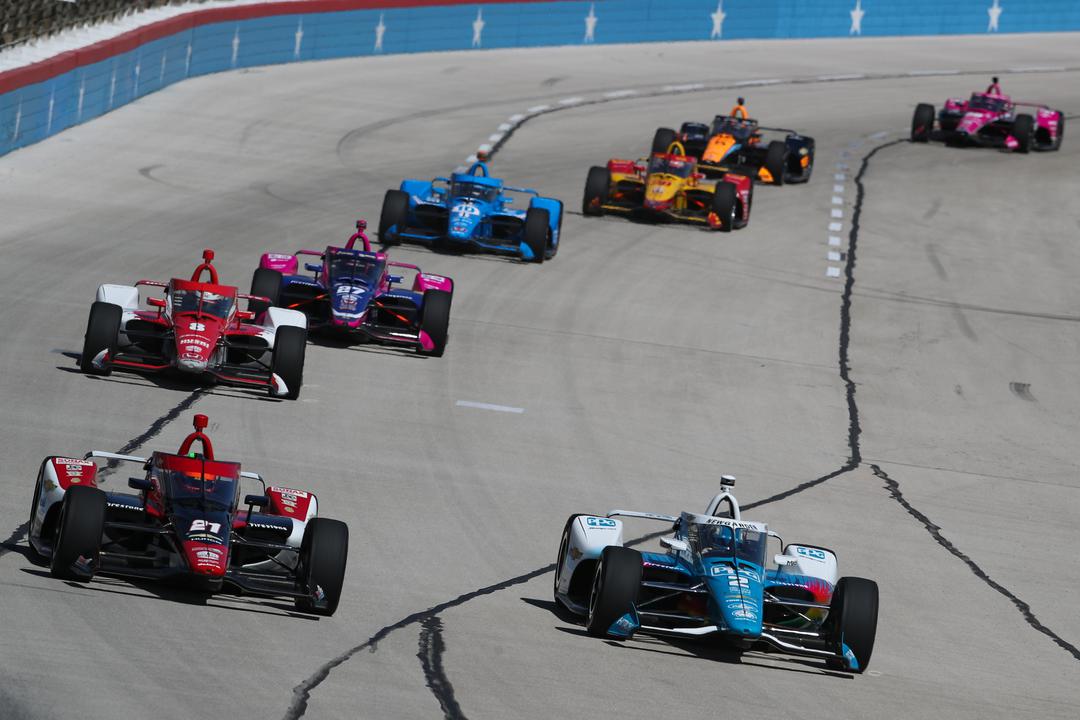 The Fort Worth oval had become notorious for being a case of follow-the-leader since the application in November 2019 of a substance which made the high line grippier for NASCARs but treacherous for the Firestone-shod IndyCars.

At its second event of the 2022 season, the open-wheeler category opted to hold a special session whereby drivers would be handed an extra set of tyres for the express purpose of circulating up top in an attempt to rubber in a second lane.

Only seven steerers took up the invitation, others apparently deterred by the risk of crashing just before final practice, but the race which was held on the following afternoon was regarded as one of the better ones at Texas in recent years.

The increase in passing did also coincide with the introduction of a new aerodynamic package which gave drivers more downforce, and the shifting of race start to the early afternoon.

However, Josef Newgarden credited top line practice with giving him the ability to go high and pass Team Penske team-mate Scott McLaughlin for victory in the final corner.

“It wasn’t the daytime running; it’s the changes to the aerodynamic package,” he said regarding the extra overtaking.

“We were running quite a bit more downforce than last year, the wind direction was different than normal – normally, we’re getting a tailwind down the front straight [and] we had a headwind, so that also aids the passing – and also I actually think the session they ran [before final practice] cleaned up a little bit of the second lane.

“I would have hit the fence, for sure.”

Despite having victory snatched from him by a margin of 0.0669s, McLaughlin said the top line session should be rolled out to other ovals.

“They almost need to do that not only here; I think they should do that everywhere,” declared the New Zealander.

“Because, no one’s going to run the slower lane. People don’t do that; we focus on quali[fying].

“I think Gateway, and I’m sure Iowa, we’ll bed it in, but yeah, I agree with Josef; I think extra downforce was helpful.

“Personally, I like a night race – I think primetime’s [television] always awesome – but we don’t make those decisions; our boss does,” he added in reference to Roger Penske being the owner also of IndyCar.

Their team-mate Will Power had been agitating for the type of special practice session which came to pass, but was disappointed about how few drivers joined him in taking part.

He also opined that the problematic substance would need to be scraped off for top line practice to be more effective.

“I think you could just require a lot more cars,” said Power in the hours after that hit-out.

“You were able to get a pretty reasonable speed up there [but] the bottom is just so much quicker and you’d have to take that stuff off for it to work well.”

However, it was not just that trio of team-mates who are backing the initiative.

Chip Ganassi Racing’s Marcus Ericsson, the only man who stood in the way of a Team Penske podium sweep at the finish, gave qualified support, although he would not discount the aerodynamics tweak as being the more significant factor.

“I think we need to understand if that extra practice that we did… if that was the reason why we could run two lanes, then we definitely need to do this if we come back here to Texas, which I hope [is the case],” said the Swede.

“That just makes the race so much better because you don’t have to bail out in Turn 1 when you don’t pass someone or clear someone, so it’s definitely made a difference.

“So, it was definitely a big, big improvement. I think IndyCar has done a great job there.”

The next oval event on the calendar is the big one, the Indianapolis 500, in May.

In the more immediate future, the third event of the season takes place on the streets of Long Beach on April 8-10 (local time), with that race to be streamed live and ad-free on Stan Sport.