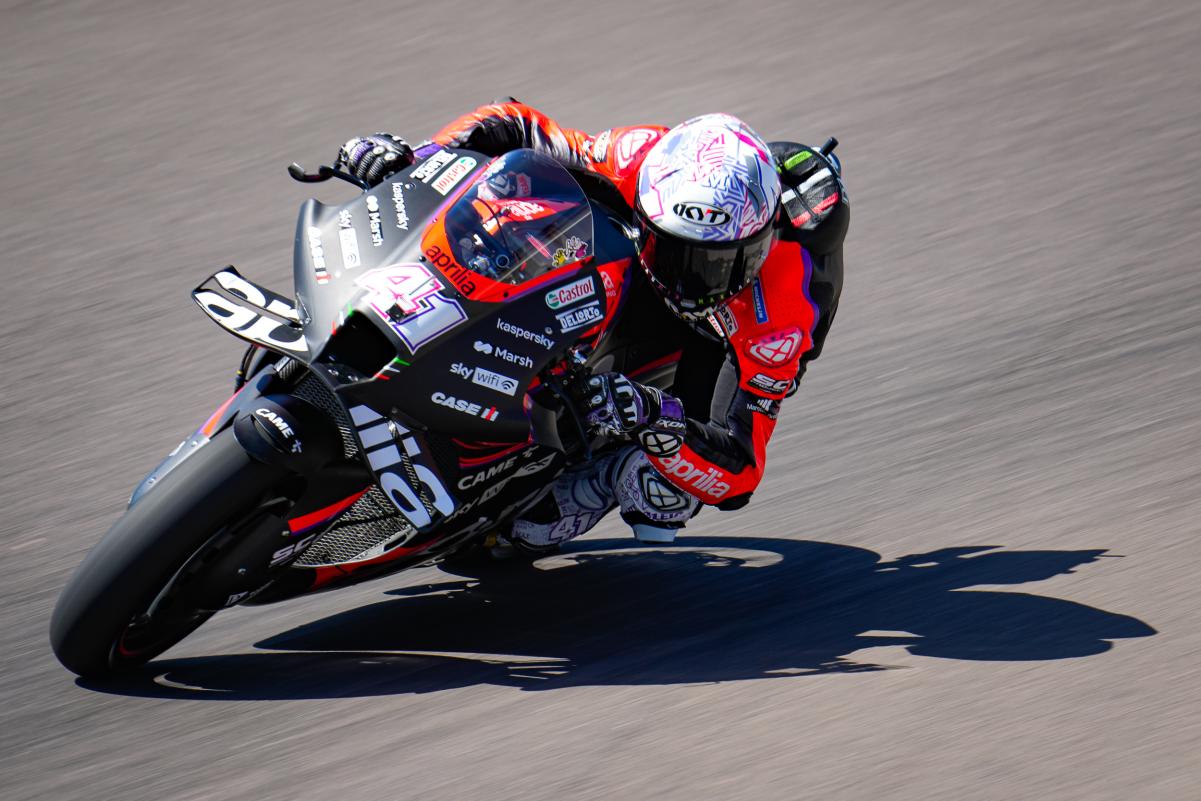 Aleix Espargaro has given Aprilia its first pole position in the MotoGP era in qualifying for the Gran Premio Michelin De La Republica Argentina.

The Spaniard went as fast as a 1:37.688s just before the chequered flag flew on Qualifying 2 at the Termas de Rio Hondo circuit, usurping Pramac Racing’s Jorge Martin.

As such, the front row for Sunday’s 25-lapper will be Espargaro on #41, and the Ducati GP22s of Martin and Mooney VR46’s Luca Marini.

Maverick Viñales made it both Aprilias in the top five, 2021 championship Fabio Quartararo took sixth, and Jack Miller ended up 11th after an early crash in Q2.

However, the latter could yet start even further back than that after seemingly impeding Quartararo during their second runs, a matter which is under investigation.

UPDATE: Miller tells reporters he has been given a grid penalty

After the saga that was the late-running cargo plane, the premier class finally hit the track from just after midday on Saturday (local time) for two, hour-long practice sessions and the usual pair of qualifying hit-outs.

Among those who had to go into Qualifying 1 were championship leader Enea Bastianini (Gresini Ducati) and an out-of-sorts Francesco Bagnaia (Ducati Lenovo Team), neither of whom would get out of that session.

No sooner had Miller set that time, however, was he down at Turn 1 at the start of his second flyer after folding the front of Bike #43.

When the field went back out for their second runs, Quartararo was seen gesticulating at Miller after apparently being held up by the Queenslander on the way to Turn 7 while on a hot lap.

Espargaro then fired in the 1:37.688s, but the threat of Brad Binder remained given the Red Bull KTM rider was fastest to the second sector with the chequered flag out.

However, the South African’s lap went away from him in the third sector, by more than a second, and Aprilia Racing was indeed able to celebrate a pole position.

Behind the front row of Aleix Espargaro, Martin, and Marini, will be a second row of Pol Espargaro (Repsol Honda) from Viñales and Quartararo.

Takaaki Nakagami came from COVID isolation to a surprise start this weekend and ultimately 10th on the grid on his Idemitsu LCR Honda.

Miller was unable to improve on his first run when he went back out on his second bike, leaving him 11th on the grid for now, and Brad Binder one spot further back.

Earlier in the day, Bagnaia had been an obviously frustrated figure after failing to earn direct passage to the latter stanza of qualifying.

To make matters worse, he hardly set a representative lap time on his first run in Q1, having had a very unsettled run through Turn 11, and was 14th-quickest of 14 when the track went quiet.

Bastianini knocked Bagnaia back another spot when he clocked a 1:38.566s in the last minute before the chequered flag, and neither would be able to do any better than that.

As such, Row 5 on the grid on Sunday afternoon will be Bastianini from Bagnaia and their compatriot Franco Morbidelli (Monster Energy Yamaha).

Remy Gardner is set to start 22nd on his Tech3 KTM, with the rest of the grid being Darryn Binder (WithU RNF Yamaha), and Stefan Bradl (Repsol Honda) on the seat normally occupied by Marc Marquez.