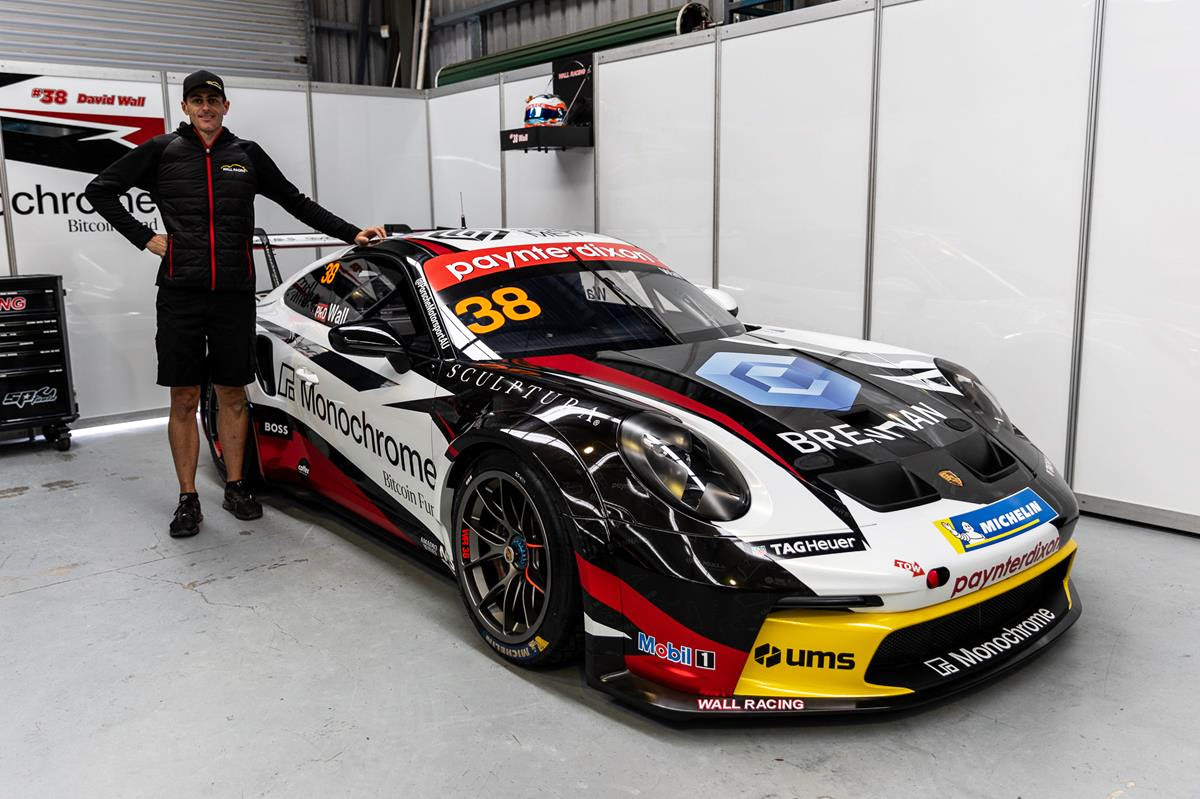 David Wall with his #38 Porsche

David Wall has brought Monochrome Asset Management aboard as naming rights sponsor on the #38 entry with which he’ll tackle the new season of Porsche Paynter Dixon Carrera Cup Australia.

The 2017 series winner wound up fourth in the points last year, taking a pair of wins at Mount Panorama.

He’s got a fresh look to match his new Type 992 Porsche 911 GT3 Cup car, with a Monochrome-led black, white, red and yellow livery.

“I’m really happy with our new livery, it was a team effort and has some great features including the outlines of the tracks we will compete at this year shadowed in the black detail,” said Wall.

“I knew when my wife exclaimed at how good it looked when I showed her the design, that we had really ticked the box with this one.”

Having overcome the challenges of being Sydney-based during last year’s COVID-19 outbreak, the 39-year-old is looking forward to a smoother campaign this time around.

“We clean swept the first round at Bathurst and was on target for another strong showing at the following round, when we blew a tyre on the last lap while running second,” he recalled.

“This unfortunately put pay to our championship ambitions. But we really enjoy Carrera Cup, the people, the cars and for me, the championship is the best run category in the country.

“Since the initial 992 handover and test session at Sydney Motorsport Park in January, the team has been hard at work testing and understanding the new car’s characteristics.

“We have completed successful sessions at Winton since and are looking forward to the first round.

“It should be an amazing spectacle seeing all the new cars on the updated Albert Park Circuit layout, I can’t wait.”

Wall will have continuity in his personnel, with David Fyfe and Todd Gleeson leading the engineering and mechanic departments, respectively.

With Craig Lowndes not returning to the squad this season, Wall Racing’s other two Carrera Cup cars will both be entered in the Pro-Am class, driven by Liam Talbot and Drew Hall.

Albert Park next weekend represents Round 1 of the 2022 season.