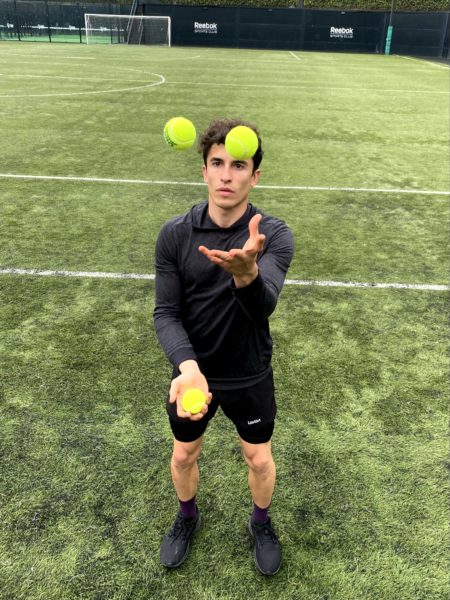 Marc Marquez has revealed that he is juggling as part of his bid to get back on a MotoGP bike after suffering from double vision yet again.

The six-time premier class champion has been ruled out of this weekend’s Argentina MotoGP round after his horror Mandalika highside just under a fortnight ago.

The Repsol Honda Team has since confirmed that test rider Stefan Bradl will fill his seat at Termas de Rio Hondo and, given the Grand Prix of the Americas follows just a week later, there is a good chance that Marquez will also miss that event.

In the meantime, he is using juggling to help him get back onto a motorcycle.

A photograph published on the Spaniard’s Twitter page shows him juggling three tennis balls, with the caption, “Coordination exercises, we keep recovering!”

Encouragingly for Marquez, his check-up on the Monday (local time) just past showed “very favourable improvements” in his diplopia (double vision), according to the factory Honda squad.

Specifically, there has been “very favourable evolution in the paralysis of the fourth right nerve” which he re-injured in his monster Warm Up crash in Indonesia, in the words of his ophthalmologist Dr Sanchez Dalmau.

That was the nerve which #93 also injured in a motocross crash in late-October last year, after which he missed the final two rounds of the season and the test which followed days later.

He also missed virtually the entirety of the 2020 campaign, and the start of that which followed, after the big spill at Jerez that year.

As has been the case for most of the grands prix which Marquez has been forced to sit out in the last two years, Bradl has been called up as his replacement for this weekend.

The German said, “The most important thing is sending my best to Marc and hoping that he recovers quickly.

“Until then, I will do my best for Honda HRC and the Repsol Honda Team in his place.

“I have already done a few tests this year so I am familiar with the new Honda RC213V but of course coming into a MotoGP weekend is a different situation.

“I have some good memories of Argentina; I was fifth there in 2014 and seventh there when I last raced in Termas in 2016.

“We will work with the team to define the plan for the weekend, I have no doubt it will be a busy one.”

It was also a bad weekend at Mandalika for team-mate Pol Espargaro, who struggled to a finish of 12th in the second race of the season after taking a podium in Round 1 at Qatar’s Lusail.

He said ahead of the Argentina Grand Prix, “I am looking forward to getting our season back on the right line after a difficult weekend in Indonesia.

“What has happened is in the past and now we focus on the future.

“We are close to the top of the championship and the objective is to put together a weekend like in Qatar.

“I have had some consistent results in Argentina in the past and we know what the Honda this year can do. It’s time to keep working and show our potential.”

Espargaro, who is sixth in the championship, has never ridden a Honda at Termas de Rio Hondo given MotoGP skipped it for the past two years due to the COVID-19 pandemic.