F1 carnival to kick off with Ask Crofty show

F1 carnival to kick off with Ask Crofty show 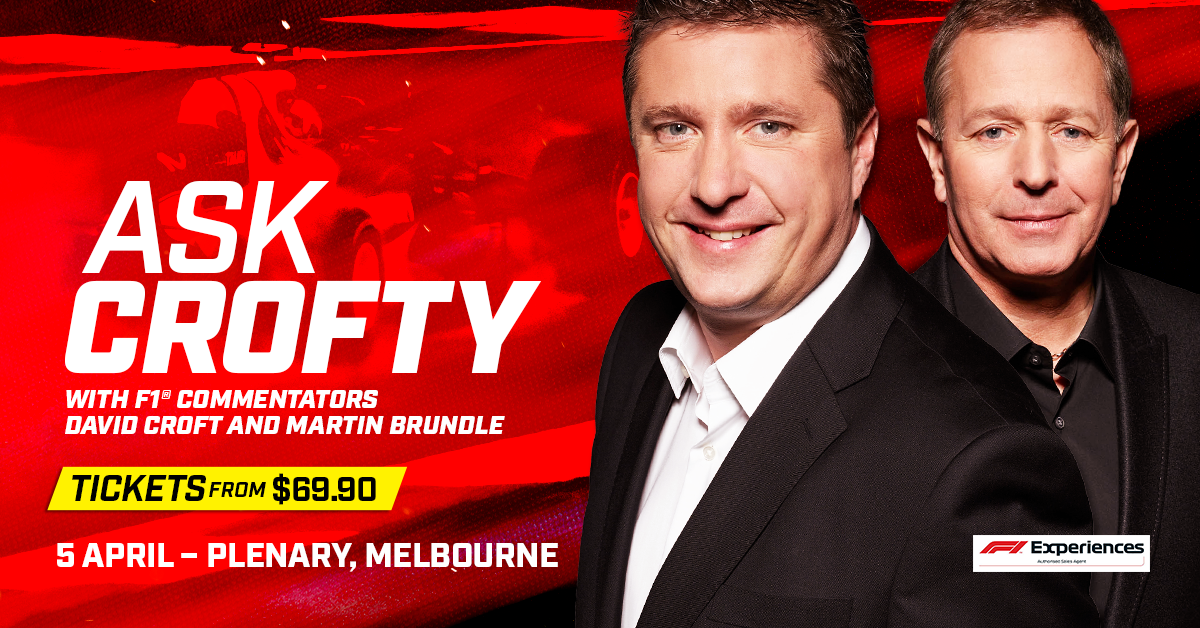 The Ask Crofty event is just days away

It’s only a few sleeps until the F1 show comes to town and it’ll be Sky Sports UK commentator David Croft’s ‘Ask Crofty’ show that will kickstart what is one of Melbourne’s most anticipated weeks on the calendar.

Croft will be joined by co-commentator and friend Martin Brundle at Plenary Theatre for what is a fun-filled interactive night for all motorsport fans. The show is an interactive feast of F1 with Croft and Brundle getting the crowd involved and helping to drive the conversation through live quizzes and questionnaires. With plenty of prizes to be won including tickets to this year’s Grand Prix and signed merchandise, you’re guaranteed to be entertained from start to finish.

After a two-year hiatus, the Heineken Formula 1 Australian Grand Prix returns to the streets of Albert Park and Croft admits it’s about much more than the race when F1 comes to Australia.

“I’ve always said, some venues host a Grand Prix and others embrace a Grand Prix, and Australia certainly embraces it,” Croft said.

“We felt a massive loss as a sport not being down in Australia in recent years, which is why I’m really glad that we’re not only coming back this year for the race, but Martin and I will be up hosting a show, with a large number of fans talking about the sport we all love.

“Martin and I wanted to mark it by making an appearance and having a chat because wherever we go in Australia, we seem to get stopped by so many people to chat about Formula 1, because there is a massive passion for the sport.”

The highlight for many will be the chance to take part in the ‘Commentators Challenge’ where people are selected from the audience to try their hand at calling some of the most entertaining and thrilling races from the past.

“It’s what we love about Formula 1, everyone has an opinion and we’re more than happy to chat about it.”

The high-profile event will be a perfect way for fans and corporates alike to kick off a massive party-like week marking the return of Formula 1 to Albert Park.

Crofty will take you behind the scenes and inside the commentary box of what is one of the world’s most followed and watched sports which has experienced enormous growth in viewer and spectator numbers in recent seasons.

With both Saturday and Sunday’s tickets to the track sold out, seeing and hearing from both Croft and Brundle will give fans an opportunity to get up close and personal with ‘the voices of Formula 1’, giving you an insight to everything that happens both on and off the track.

“We’ve been away from Australia for way too long and we can’t wait to be back Down Under. We want to get to Australia and put on a show as part of the festival.

“I’m looking forward to getting to a country that loves its sport, loves its Formula 1 and we know you [Australia] have been waiting a long time for us to come back.”

Tickets are still available for ‘Ask Crofty’ with prices starting from just $69.90. Click here to guarantee your seat.