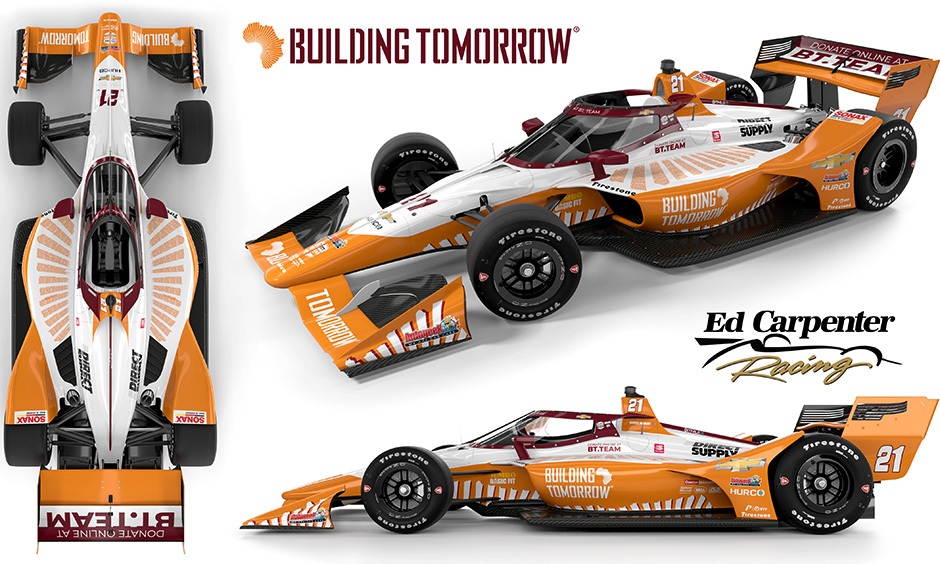 Rinus VeeKay’s IndyCar will run in a one-off orange livery in May’s road course race at Indianapolis as part of a charity tie-up.

The #21 Ed Carpenter Racing Chevrolet will sport the branding of ‘Building Tomorrow’, a not-for-profit organisation which supports literacy and numeracy in Uganda, at the fifth event of the season.

As part of the fundraising effort, known as ‘Ride With Rinus’, anyone who donates $75 can have their name added to VeeKay’s car.

Building Tomorrow was founded in 2006 and aims to improve learning outcomes in underserved communities throughout Uganda.

Prior to the COVID-19 pandemic, more than 1.2 million Ugandan children were out of school, and a $75 donation will pay for five children to enrol in the upcoming Roots to Rise camp.

“We’re delighted to partner with Ed Carpenter Racing to raise funds and awareness for the learning crisis in Uganda,” said George Srour, co-founder and chief dreamer of Building Tomorrow.

“With this partnership, we’re giving anyone who wants to support literacy and numeracy – basic skills so many Ugandan kids haven’t had the chance to master – the opportunity to do so, and in return they get the chance to ‘Ride With Rinus’ on May 14.”

VeeKay, currently in his third IndyCar season, scored his first win in the corresponding race of 2021.

The next competitive action of the 2022 campaign is the Grand Prix of Long Beach on April 8-10 (local time).