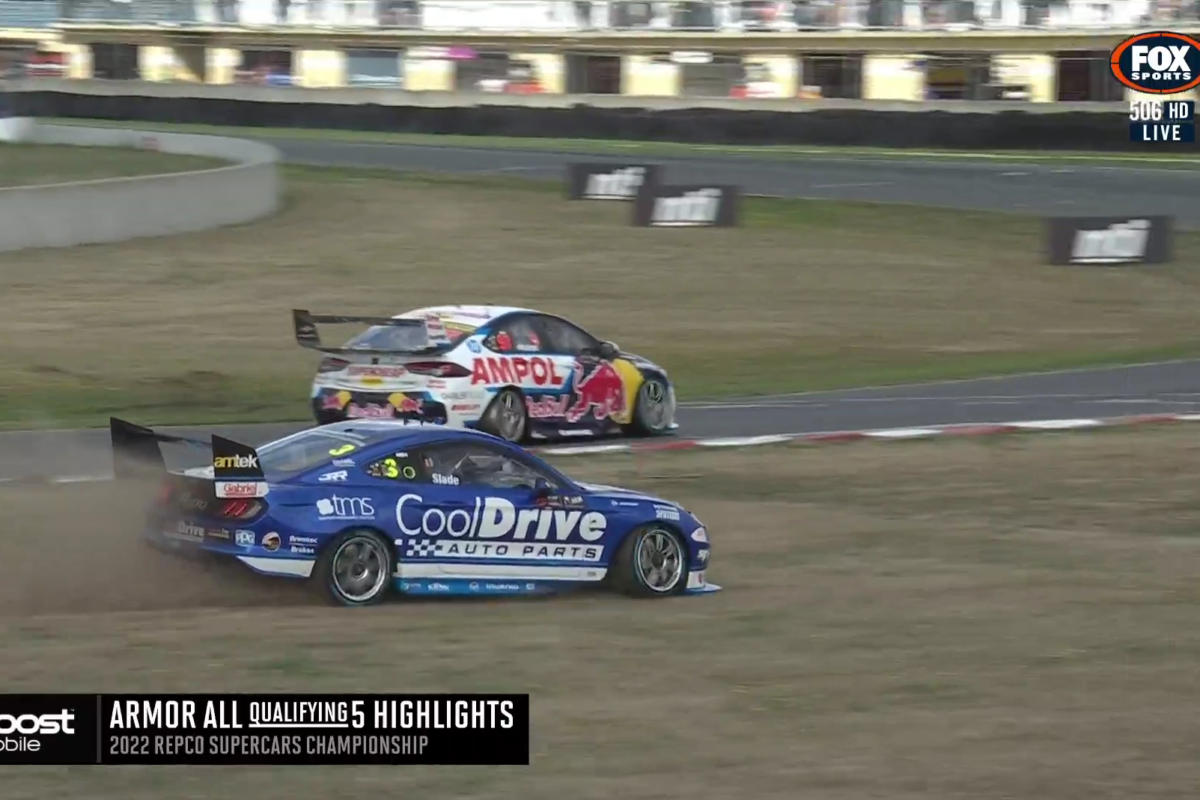 Tim Slade off the road after he and Shane van Gisbergen came together. Picture: Fox Sports

Shane van Gisbergen has one pole position and a potentially damaged #97 ZB Commodore after a clash with Tim Slade in the second of the morning’s qualifying sessions at the Ned Whisky Tasmania SuperSprint.

Van Gisbergen led Broc Feeney in achieving a Red Bull Ampol Racing front row lockout for Race 4 of the Repco Supercars Championship, and was on for back-to-back poles when he and Slade made significant contact at Turn 6 in Qualifying for Race 5 at Symmons Plains.

It meant that the Shell V-Power Racing Team’s Will Davison held onto top spot on the grid for the final race of the weekend after gambling on running with his last remaining set of new tyres at the start of the session.

Pending any penalties, van Gisbergen will be third on the grid for Race 5, with Matt Stone Racing’s Jack Le Brocq making the front row in the #34 Truck Assist ZB Commodore.

Anton De Pasquale (#11 Shell V-Power Mustang) was fastest at the end of the opening runs of the first 12-minute session of the morning, setting a 0:50.7779s on used tyres.

Unsurprisingly, few had gone out on new tyres to that point, and Feeney (#88 ZB Commodore) would be the first to move the benchmark when he clocked a 0:50.6360s in the final minute before the chequered flag.

However, Feeney had van Gisbergen in the tow and the 2021 champion quickly knocked him off with a 0:50.4884s, making for an all-Triple Eight Race Engineering top two.

Feeney had no more time in him, but van Gisbergen consolidated top spot on his next lap when he went slightly quicker again in laying down a 0:50.4840s.

The cloud cover was picking up at the start of the latter 12-minute session, and the pace was up straight away.

Davison opted to use his last set of new tyres at the beginning, and punched out a 0:50.5515s on a single flyer before parking the #17 Mustang for the balance of the session.

That time was slightly faster than van Gisbergen’s initial 0:50.6184s effort, before Le Brocq went second-quickest on a 0:50.6155s at the start of the second runs.

Van Gisbergen was then fastest to the second sector when he came up on Slade at the end of the back straight.

The championship leader looked to go down the inside of Car #3 but then they made side-to-side contact which forced Slade off the track and pulled a tyre off the right-rear rim at the very least for van Gisbergen.

The Triple Eight driver was, however, able to immediately drive into the pits, and Slade also left the scene of the incident under his own power.

CLICK HERE for reaction from both of the drivers involved

The session was red flagged in the 11th minute and would not restart, leaving Davison on pole and Le Brocq alongside on the front row.

For now, van Gisbergen is third courtesy of his first-run banker, from Hazelwood, De Pasquale, Reynolds, Feeney, Waters, Slade in ninth, and Lee Holdsworth (#10 Penrite Mustang) rounding out the top 10, while Mostert was 19th-fastest.

The van Gisbergen-Slade crash is under investigation.