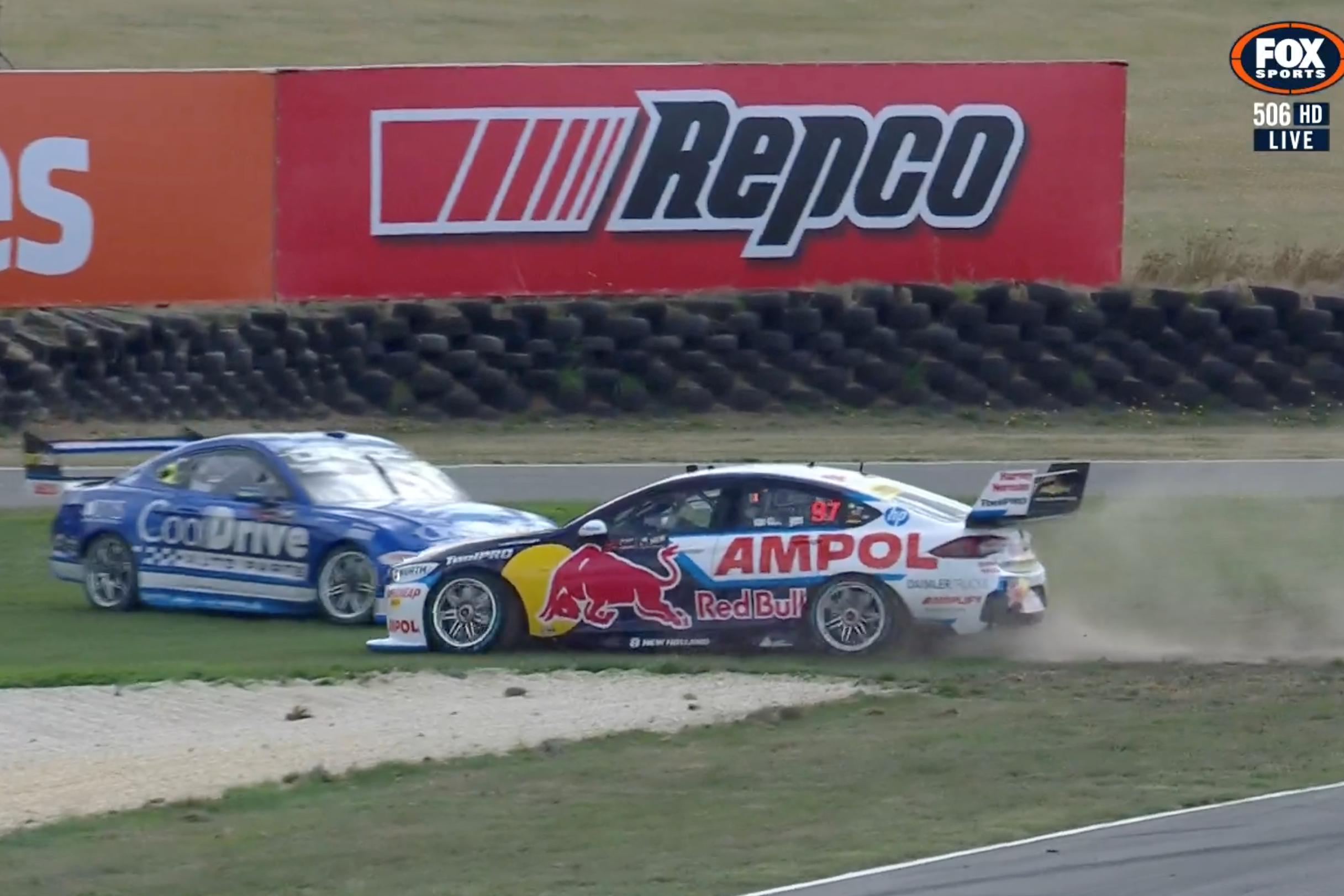 Shane van Gisbergen and Tim Slade have given their respective takes on a clumsy clash in the final minutes of Qualifying for Race 5 at the Ned Whisky Tasmania SuperSprint.

The red flag was drawn with little more than a minute remaining in the session at Symmons Plains when the #97 Holden ZB Commodore and #3 Ford Mustang collided.

At the time, van Gisbergen had set the quickest first and second sector of anyone before making contact with Slade at the penultimate corner.

The wheel-to-wheel contact resulted in a right rear puncture for the Red Bull Ampol Racing driver while the CoolDrive Racing entry suffered a left front puncture and steering damage.

“Yeah, it was a bit of a shame,” said van Gisbergen.

“He [Slade] mucked up out of the hairpin and let someone go.

“I was on a ripper, big tow, and then he kind of went wide at the sweeper, so I thought, ‘oh okay, he’s giving me the line’ and then at the last minute he come back to the race line.

“I was like ‘oh shit’ and shat myself. Just went up the inside, but then he tried to race me and turned down. I’m on a heater, he’s not. Then a flat tyre, which sucks.

“Yeah, real shame, lucky we put down a banker, that’s probably the saving grace, but it is what it is.”

That banker was enough to earn van Gisbergen third on the grid for Race 5.

Slade, meanwhile, was ninth at the session’s premature conclusion.

However, the incident is under investigation by the Motorsport Australia stewards, and could yet change those results.

Asked for his take on the clash, Slade said he was trying to place himself for his last flying lap.

“We were just trying to position ourselves in the right part of the train,” said Slade.

“Every session we’re doing warm-up laps. I just dropped in behind one of the DJR cars there and then the two Triple Eight cars behind were duking it out themselves.

“Shane bombed me at the last corner. We were just going to do a warm-up lap, no lights on or anything, it’s not as if he was going to start a lap and use us up on exit.

“That’s pretty much it. It’s annoying. Like I said not to get a lap in at the end there and just creates unnecessary work for the guys.”

Slade was nevertheless optimistic heading into the final two races of the weekend.

“We had good race pace yesterday, we just had no speed in quali,” he said.

“I think if anything, the car should be that bit better in the race given that the balance we’ve gone towards today.

“It’s nice to be fifth in the first one and then I think we could’ve been a bit higher in the second one. Still good to be in the top 10.” The right-rear rim on Car #97 after the incident