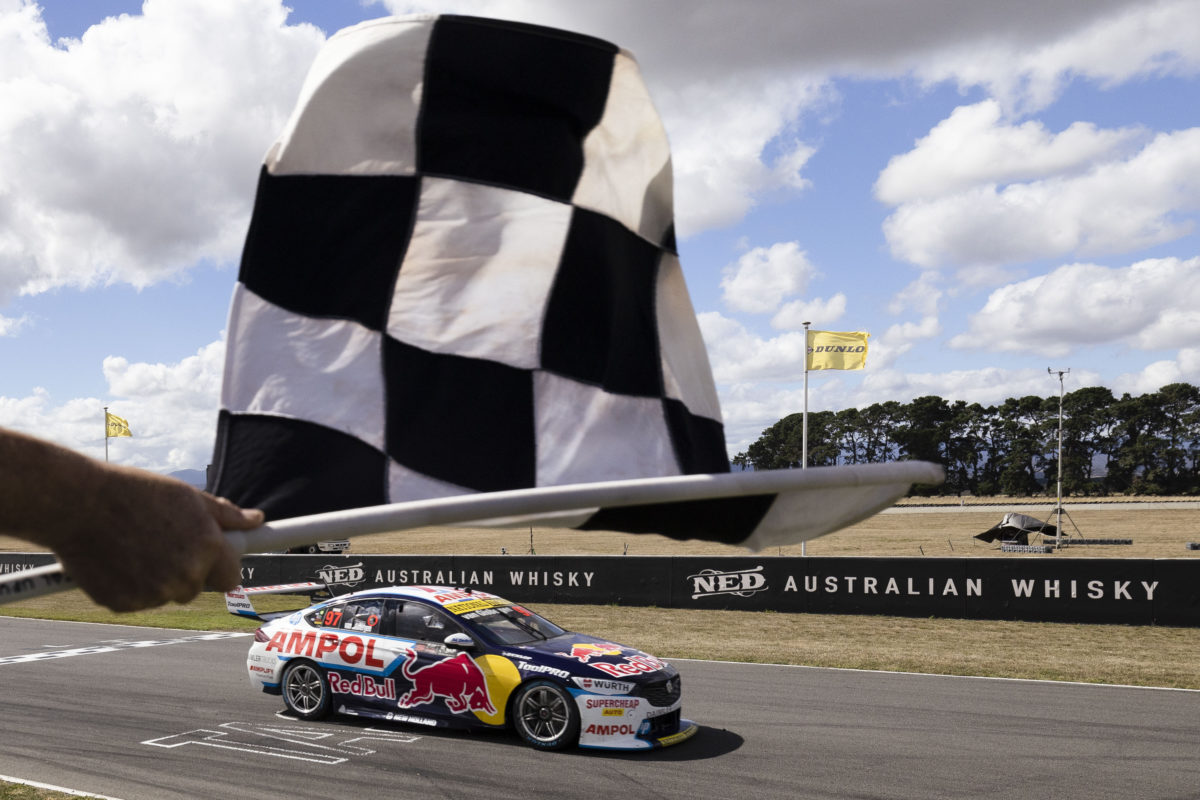 Shane van Gisbergen says he tricked his Dick Johnson Racing rivals into pitting early on his way to victory in Race 5 of the Repco Supercars Championship at Symmons Plains.

The Red Bull Ampol Racing driver completed a clean sweep of the Ned Whisky Tasmania SuperSprint in a Race 5 podium which was rounded out by the Shell V-Power Racing Team entries of Will Davison and Anton De Pasquale.

The latter had been right up behind van Gisbergen before he peeled off for his compulsory pit stop a relatively early 10 laps into the race, and Davison was in for service two laps later.

Despite the possibility of an undercut, van Gisbergen pressed on until Lap 22, exactly halfway into the race, and emerged several tenths up on De Pasquale, who remained ahead of Davison in what had become the effective battle for the podium.

The 2021 champion also had the advantage of newer super soft rear tyres, including a brand-new one on the right-hand side, and was not seriously threatened from there.

According to van Gisbergen, there was an element of gamesmanship in his radio messages.

“I was screaming over the radio pretending I had no rear [tyre life left], and then made them pit early and then I just went,” he said post-race.

It means van Gisbergen has four race wins from his first five with new engineer Andrew Edwards, although he expects that the Ford team in the garage next door will still take the fight up to him.

“We’ve got some tough competition with those guys [DJR],” observed #97.

“I don’t mean that comment [ie ‘sucked in’] in a bad way; they’re very tough to beat.

“Andrew has been a great asset to our team, but the whole team’s working well and big changes this year but been fun to be a part of.”

“The car’s been really good all weekend and Broc’s been up here as well, and yeah, just can’t thank the guys enough.

“Each race, we had to work for it, some more good passes there [Race 5], and I hope it was good to watch.”

While van Gisbergen picked up 310 points out of 315, having also twice collected the fastest lap bonus, his weekend was not particularly straightforward.

He had to make several bold moves to come from fifth on the grid in Race 3, and twice overtook Feeney on the road in Race 4.

There was also the coming-together with Tim Slade in Qualifying for Race 5 which may well have cost van Gisbergen pole given he was fastest to the second sector at the time.

Still, his banker was good enough for third on the grid for Race 5, in which the 32-year-old had assumed second position before throwing a dummy and then diving past Davison on Lap 3.

From there, van Gisbergen led the rest of the way, but for the pit stop cycle, and is now 67 points up in the drivers’ championship.

His nearest rival in the standings is De Pasquale, who held second spot in Race 5 until he ran wide at the Hairpin on Lap 40, and would finish a spot behind Davison.

Event 3 of the 2022 Supercars Championship is a four-race affair at the Formula 1 Heineken Australian Grand Prix on April 7-10.