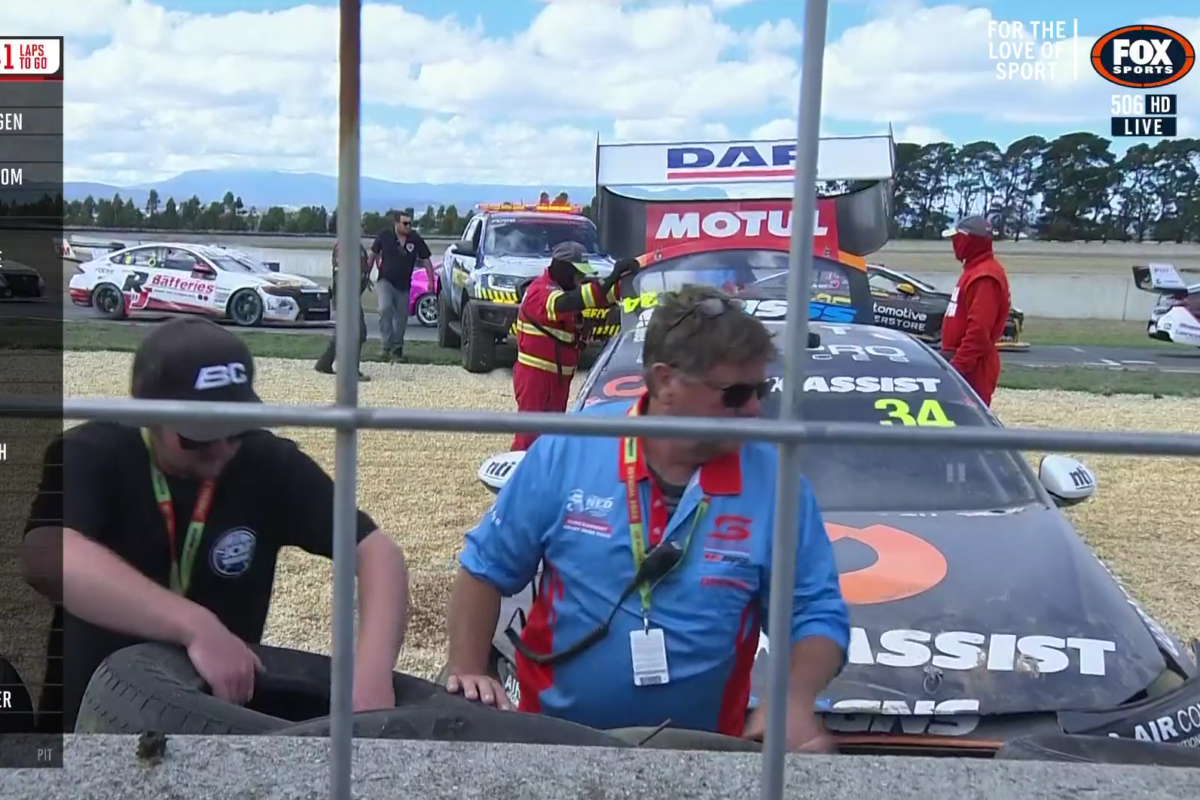 Race 4 of the Repco Supercars Championship at Symmons Plains has been suspended due to an opening lap crash.

Jack Le Brocq and Andre Heimgartner appeared to interlock wheels when they made contact just outside the top 10 as the field poured through Turn 7, breaking the former’s steering.

The Matt Stone Racing driver is out of his car, but Brad Jones Racing’s Heimgartner initially stayed in the #8 R&J Batteries ZB Commodore in the hope of proceeding.

The reason for the red flag, however, is to reset the safety barriers.

Le Brocq, who is supposed to start on the front row in Race 5 later in the day, said of his physical condition, “Yeah, all good, just a little bit winded.

“It’s no good. I feel sorry for all the team and everything. It’s very unfortunate.

“I just hope we can get it fixed for the next one. It’s been a tough start.”

On the incident, he explained, “I haven’t seen the replay.

“I thought I had enough overlap on Andre. Yeah look, I don’t know.

“I think Andre just came across the front of it. We’ve had unfortunate wheel lock there. Just grabbed my front tyre and I think as good as it engaged with his rear tyre it just broke the steering I think.

“We just wanted to get through this race cleanly and actually get some race running and see what the car felt like.

“It’s unfortunate, but hopefully we can get it fixed.”

Heimgartner said during the stoppage, “I’m not completely sure [what happened].

“I just ended up in the fence with a car on the side of me.

“Pretty disappointing for the start of the race, but yeah, I don’t know what the go was there.

“I think he sort of obviously had a moment, drove straight into the steering, and then it carted us both off.

“I don’t think it was anything intentional, but pretty shithouse for the start of the race.”

Broc Feeney was leading at the time of the stoppage after besting Red Bull Ampol Racing team-mate Shane van Gisbergen when they got away from the front row.

He was about half a second up on #97 when a Safety Car was called initially.

Time-certainty is one lap after 13:48 local time/AEDT.