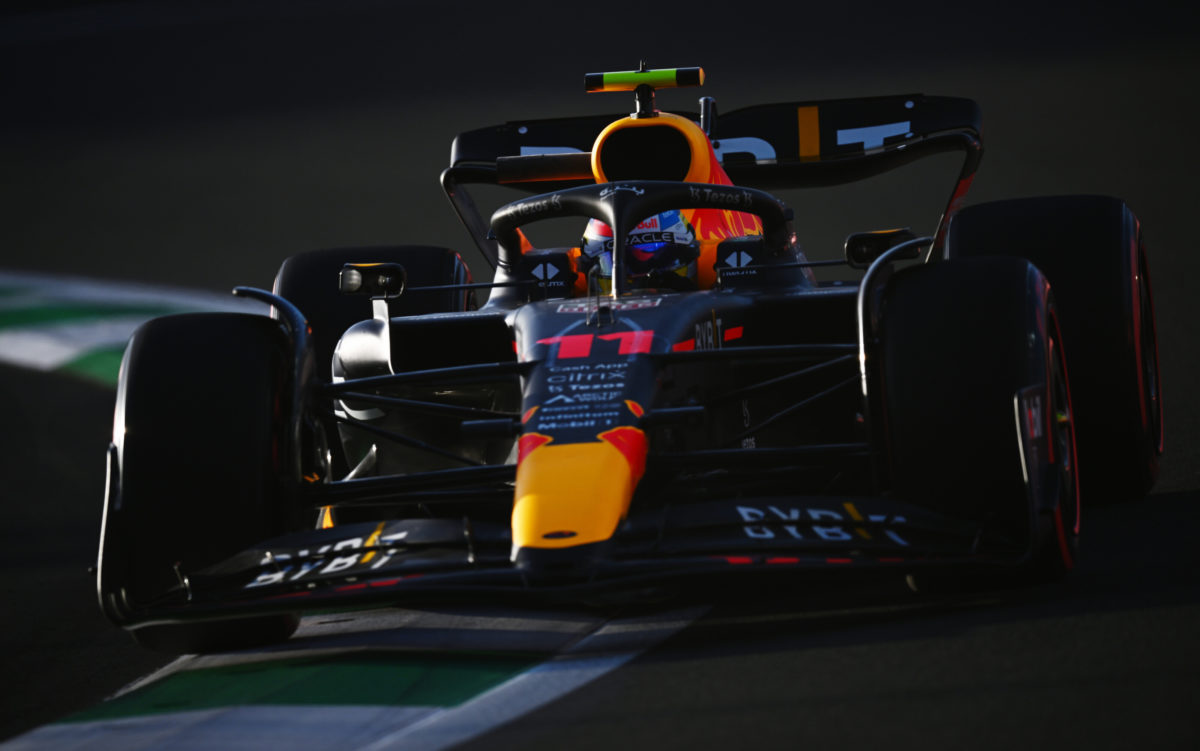 Sergio Perez has claimed the first pole position of his Formula 1 career after a prolonged qualifying session for the Saudi Arabian Grand Prix.

A late lap upset what looked to be an all-Ferrari front row, beating Charles Leclerc by 0.025s with Carlos Sainz third, and Max Verstappen only fourth.

However, the dominant story from the session was a heavy crash for Mick Schumacher that saw the German airlifted to hospital for precautionary checks.

The Haas driver had progressed through to Qualifying 2, before a mistake left him in the wall at Turn 10.

Kevin Magnussen set the early pace as Qualifying 1 began, the Haas driver setting a 1:30.425s to kick off proceedings.

His team-mate duly went second fastest, a 1:30.525s, the Haas pairing out on a set of soft compound rubber.

With just over 11 minutes to run, the red flag was shown after Nicholas Latifi crashed at Turn 13, the banked left-hand sweeper at the bottom end of the circuit.

The interruption came seconds before Leclerc and Sainz were set to cross the line to complete their first – and likely only – flying laps of the phase.

Soon after the restart, Yuki Tsunoda was told to return to the box for “an issue” in his AlphaTauri.

Running a set of scrubbed tyres, Verstappen set a 1:29.330s to move to the top of the timesheets.

That was quickly pushed down to third when Sainz and Leclerc posted their times, the former fastest with a 1:28.855s versus a 1:29.039s for his team-mate.

A strong lap from George Russell saw the Mercedes driver provisionally fourth fastest with a 1:29.680s, 0.9s quicker than Lewis Hamilton had managed to that point.

While the Ferraris returned to the pits following their flying laps, Verstappen remained on track as he recorded a 1:28.928s to split the two Prancing Horses.

As the segment began to draw to a close, it was clear Hamilton was struggling.

He sat 16th entering the final minute of the phase, the Brit having remained on track after setting his best lap, taking a cooldown lap before embarking on another push lap.

He was up on the time he needed to escape the drop zone to the first split, though lost time in the middle sector.

By the end of the lap, Hamilton progressed only to 15th, only to immediately be bumped out of qualifying when Lance Stroll completed his flying lap seconds later.

Joining him out of the session were Alex Albon, Nico Hulkenberg, Latifi, and Tsunoda.

Qualifying 2 began in earnest, Leclerc comfortably shooting to the top of the totem with 1:28.883s despite running a set of used red-walled tyres.

Also on a set of used soft rubber, Sainz went third best with a 1:29.039s, 0.2s slower than he’d managed in Q1 but a lap that likely left him safe from elimination.

That was despite being bumped to fourth when Verstappen completed his first lap of the segment with a 1:28.945s.

Both Red Bulls set their times on new soft tyres, suggesting Ferrari held the upper hand on a single lap.

A hefty crash for Mick Schumacher drew the second red flag of the session.

The German ran wide exiting Turn 10, riding the kerb which fired him across the road on driver’s left, ripping two wheels off the car in the process as he collided with a bare concrete wall.

The delay was lengthy as Schumacher was attended to in the first instance before repairs were affected on the circuit.

That included realigning the concrete barriers, such was the force of the impact of the Haas, along with sweeping up of any carbon fibre shards and clearing oil on the circuit.

The red flag lasted almost an hour, resuming at 21:40 local time after halting running at 20:43.

Leclerc was among those who took to the circuit despite sitting on provisional pole.

Those who got out on track early had time for two warmup laps, but those at the back of the queue did not.

A number of drivers improved, including Magnussen who climbed to seventh, Russell holding on to 10th by 0.033s to be the sole Mercedes to progress to Qualifying 3.

That saw Lando Norris and Daniel Ricciardo both eliminated for McLaren, joined on the side-lines by was Zhou Guanyu, Schumacher, and Stroll.

Qualifying 3 got underway with Verstappen opting for two preparation laps, while Leclerc behind him on track did not.

Perez could only manage third with his first flying lap, while Verstappen could only do sixth after backing off in the run to the flag after a scrappy 1:29.239s.

Russel went fifth fastest with his flying lap, splitting the two Alpines with a 1:29.104s.

With two minutes remaining, all 10 remaining runners were out on track.

Leclerc was in the groove, a third of a second up on his team-mate’s best to the middle third of the lap on his final push.

However, they both found themselves demoted when Perez went 0.025s faster than Leclerc to claim his first Formula 1 pole position.

Verstappen could do no better than fourth, more than a quarter of a second down on his team-mate.