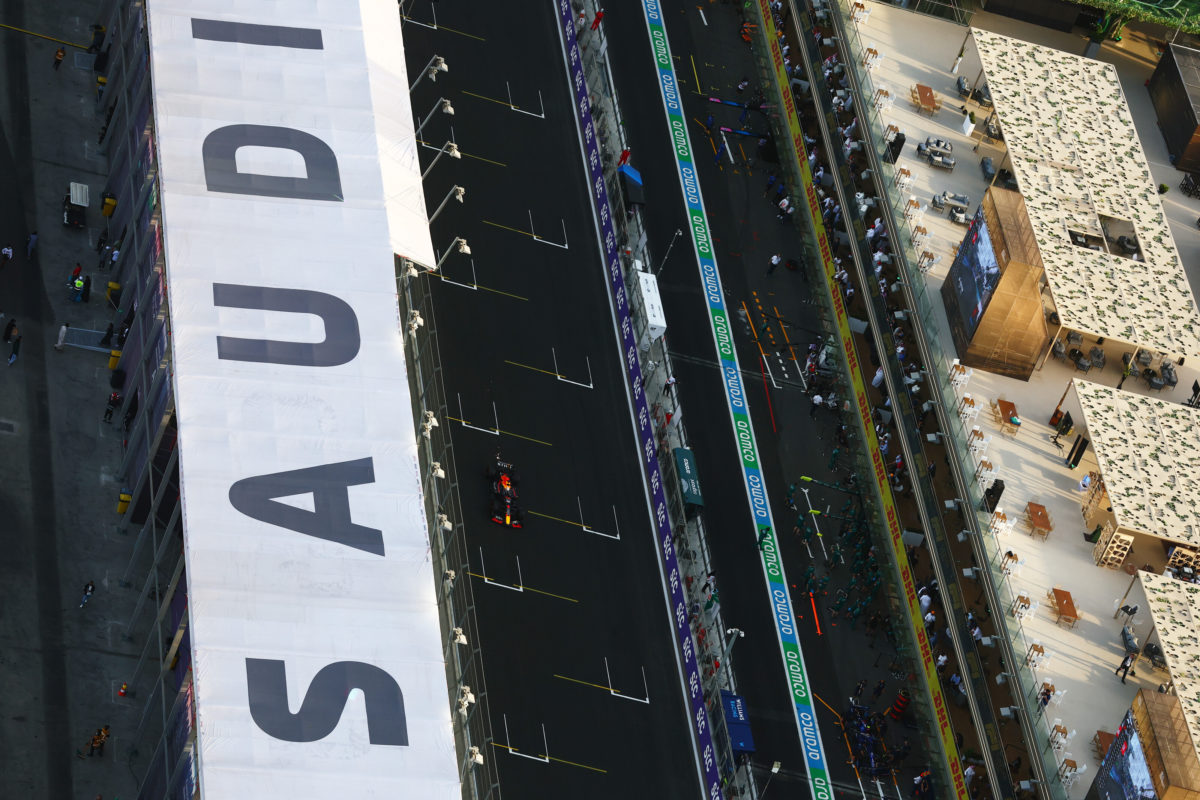 A number of Formula 1 team bosses faced a barrage of serious questions following the decision by Formula 1 to carry on racing in Saudi Arabia this weekend.

On Friday, a missile strike hit a nearby oil depot little more than 10km from the Jeddah Corniche Street Circuit, the smoke from the fire visible during the opening practice session. When night descended for Free Practice 2, the flames were clearly visible.

In response, an emergency meeting was held in the F1 paddock which saw a 15-minute delay to the start of Free Practice 2, before another meeting after the session.

Ultimately the decision was made that the event would continue as the sport received assurances that doing so was safe.

However, that raised a number of questions which were put to team bosses on Saturday prior to Free Practice 3.

Chief among them was just what assertions and guarantees had been offered, given Jeddah has been attacked twice in the last week.

Indeed, the validity of those assurances, and their very nature, appeared to be a sticking point for drivers, who deliberated for some three hours on Friday night following the conclusion of on-track action.

“I think we, after the facts of yesterday, no doubt that all of us somehow, we are concerned because these are not normal facts happening just close to the circuit.

“But the concerns, they need to be translated into, let me say, considerations and discussions.

“As we as a team, as a team principal, had assurance from the F1, from the Saudi government authorities and security agencies that everything would have been save and under control.

Those discussions ultimately ended with the drivers agreeing to compete, though the length of their deliberations suggests that was not a trivial decision.

Conflict in Saudi Arabia has been comparatively common place for a number of years, making Formula 1’s presence their somewhat hypocritical given its very public stance against Russia.

Heading into the weekend, concerns were raised over the abuse of human rights after the mass execution of 81 men on March 12.

It prompted the question; has Formula 1 allowed its commercial interests to override its judgement?

“It’s very technical, and it’s a big business, and we all have obviously an interest in growing our sport.

“At the same time, it is very clear for us and for Formula 1 that the safety of our people is the most important thing.

“I have all trust in Formula 1, also the FIA, together with promoters, with the authorities, are making this right decision.

“In general, I think being part of a sports team, I’m absolutely convinced that we have the power with being part of the sport in order to drive positive change,” he added.

“That’s why I’m also feeling comfortable in going to new countries where also different cultures, for example, exist in order to promote, to help drive change.”

Friday’s attack was carried out by the Houthis, a group which has been involved in conflict for the better part of the last two decades.

Indeed, hostilities between Houthi and Saudi Arabia has been ongoing since 2015, raising questions as to just what impact Formula 1 can have on such a mature conflict.

“As first, many government authorities were here at the racetrack yesterday,” Binotto ventured.

“They know how important it is as well for them somehow to show the positives of the country,” he added.

“I think by having all cameras on that show for the weekend here is something important for them.

“They are understanding, they know and, believe me as well, as they were with us yesterday when discussing. They’re very sensible.

“They were the first to tell us, if there would be any minimal security issues, who would be the first, the Saudi government, to stop and cancel the race because you cannot afford such a problem.

“So they are very aware of how much is important the security, the safety, the safety of us, not only on the sport but to the show, to the entire world.”

Organisers of the Dakar Rally were forced to increase security after a competitor was injured when a vehicle exploded near a hotel in Jeddah on December 30.

A police investigation into the incident ruled out any ‘criminal element’ leaving French anti-terror authorities to launch its own investigation.

Security measures around the Jeddah Corniche Street Circuit have been stepped up, with a number of ‘technical’ measures to be in place.

Those include systems with the ability to shoot missiles out of the sky, mechanisms which were explained to teams in the F1 paddock on Friday night.

“I at least am not in a position to explain that because I’m not qualified enough,” said Guenther Steiner, Haas team principal.

“But there is stuff in place which protects us.”

However, it begs the question; if an event is considered safe because it is covered by anti-missile defence systems, should the event be held in the first place? Can it by its very nature therefore be considered ‘safe’?

“We are contracted to do this championship. We run where F1 and FIA decide where the championship is, and it is their responsibility in the first place to define the calendar,” said Aston Martin’s new team boss, Mike Krack.

“Obviously if there is situations like we had yesterday, we are all consulted and then we discuss.”

Williams’ Jost Capito added: “The situation here [has existed] for many years. I think there was a missile attack during the Formula E race at the beginning of last year, and there were no worries coming here at the end of last year.

“The situation for this weekend hasn’t changed at all,” he added.

“I think that discussions should have been done before, and now will be after, but not during the event – as long as we have the confirmation that security is there and that we are safe.”

Consternation online took hold on Friday night with suggestions, from fans, that drivers had been bullied into competing.

Those comments stemmed from a report by the BBC which noted the difficulty the sport may have leaving the country should it opt not to race.

That was taken to mean authorities locally had threatened the sport, when in reality it was simply pointing out the logistical hurdles given the comparatively few flights – and seats – available from Jeddah over the weekend.

As such, the logic was seemingly put to the drivers that, since they’re effectively stuck in Saudi Arabia anyway, they may as well race.

There is little doubt that discussions need to be held following the weekend with regard to not only Saudi Arabia’s place on the F1 calendar going forward, but a number of similarly turbulent locales the sport now ventures.

“There will be a lot of discussions after this event,” said Krack.

According to the Australian Smartraveller website, visitors are advised to reconsider travel to Saudi Arabia due to terrorism and political tensions in the country.