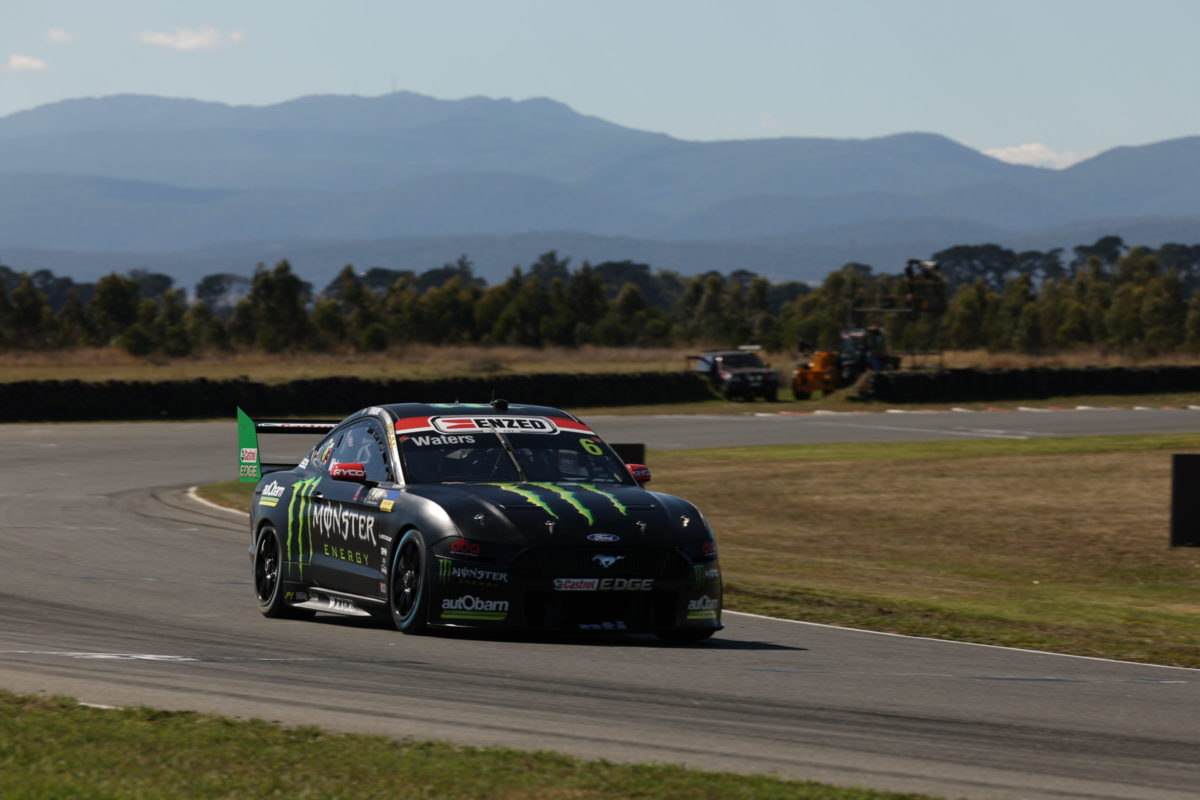 Tickford Racing’s Cameron Waters has qualified on pole position for Race 3 at the Ned Whisky Tasmania SuperSprint as a number of notables missed the top 10.

Waters set a 0:50.5363s in the #6 Monster Energy Mustang which knocked the Shell V-Power Racing Team’s Will Davison off top spot by 0.0273s at the end of the three-part knockout session at Symmons Plains.

However, neither Davison’s team-mate Anton De Pasquale nor Repco Supercars Championship leader Chaz Mostert got through to the final phase of Qualifying for Race 3, and are set to start from 12th and 13th respectively, this afternoon.

Mostert had a power steering drama at least as far back as the start of Part 2 of the session, and sat right on the bubble at the midway mark of that stanza when he was dispatched again with oil still leaking from the underside of the #25 Mobil 1 Optus ZB Commodore.

He improved, by about a tenth of a second, to a 0:50.8787s on his second run, but that was not enough to make the final segment of qualifying.

That decisive, 10-minute period began with just three cars on the track and Shane van Gisbergen set a 0:50.6436s despite still running the tyres on which he had started the session on the #97 Red Bull Ampol ZB Commodore.

On his final lap, the Tickford pilot clocked a 0:50.5363s just before the chequered flag flew, shifting Davison to the other side of the front row for Race 3 of the season.

“That was out of nowhere, that was real weird,” said Waters.

“I thought we were doing an 80 percent lap and then the other guys kind of got on with it, so [I] thought I should go with them and it was quick enough for pole.

“So, I was a bit surprised but the guys have done a fantastic job.

“The car was pretty ordinary in Practice 2, it wasn’t bad in Practice 1, and they’ve just made it better again, so massive thanks to my team.”

He added, “We didn’t have tyre life last year [but] the car’s a fair bit different to last year.

“I hope we’ve learnt a few things, it’s nice on its tyres, and we can get a trophy today.”

Brodie Kostecki (#99 Boost Mobile ZB Commodore) was a late mover to fourth and is thus set to share Row 2 of the grid with Feeney, who remained third.

Ironically, van Gisbergen failed to improve on his last run and ended up fifth, one position up on James Courtney (#5 Opposite Lock Mustang) in the second of the Tickford cars.

Andre Heimgartner (#8 R&J Batteries ZB Commodore) was seventh-fastest and Scott Pye (#20 Seiko 5 ZB Commodore) eighth, the latter having put his cue in the rack after a single, early run in Part 3.

Rounding out the top 10 were the Truck Assist Racing/Matt Stone Racing team-mates, Todd Hazelwood (#35 ZB Commodore) in ninth and Jack Le Brocq (#34 ZB Commodore) less than a tenth of a second slower.

Earlier in Part 2, De Pasquale (#11 Shell V-Power Mustang) and then Mark Winterbottom (#18 Irwin Tools ZB Commodore) were bumped out of the top 10 in the final minute of the stanza.

Winterbottom ended up 11th, and De Pasquale 12th on a 0:50.7757s from his single run, slightly slower than he had gone in Part 1 of the session.