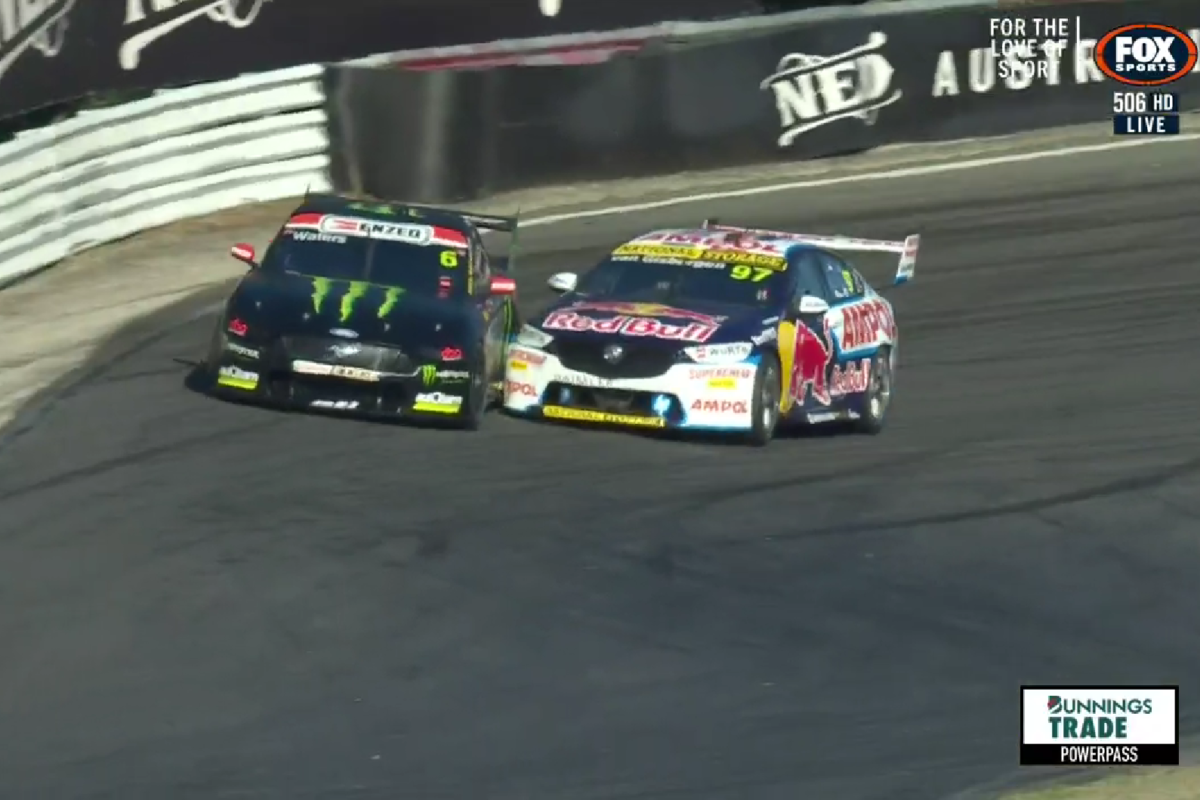 Cameron Waters has expressed support for “hard racing” after Shane van Gisbergen’s forceful passes on him and Will Davison in Race 3 of the Repco Supercars Championship at Symmons Plains.

Van Gisbergen took over second position when he went by Davison down the back straight on Lap 10, a move which he set up with a bump as they came off the Hairpin.

The Red Bull Ampol Racing driver pulled off a repeat seven laps later when he wrested the lead from Waters, and would go on to win what was the first of three races this weekend at the Ned Whisky Tasmania SuperSprint.

Former NASCAR driver Marcos Ambrose, in his capacity as television pundit, said van Gisbergen was “breaking new ground” in how he went about those passes, which were arguably NASCAR-style at least in the use of the side-draft.

Waters, on the other hand, seemed less impressed at the time, based on the bump he gave back as they powered towards the kink and ‘bird’ he flashed as #97 went past.

However, he claimed post-race that he was unperturbed, so long as he is afforded the same leeway.

“I can’t even remember what I said [on the radio],” commented the Tickford Racing driver.

“I didn’t brake early; that’s all I had left. I’m braking as efficiently as I could [but] Shane’s car was pretty quick, and he could turn under me.

“I’m all for hard racing and bumping and all that stuff, and I didn’t really think there was much in it.

“And, I expect to be able to give it back to people and not get a penalty either.

“That’s what we want; we’re an entertainment business, and we don’t want to just follow the leader.

“I gave him the bird [but] I don’t think he even saw it, so I was a bit disappointed about that.

Davison was more worried about his own car, but had a not inconsistent view to that of his Tickford counterpart.

“I didn’t even comment, I don’t think, during the race,” said the Shell V-Power Racing Team driver.

“I mean, yeah, there was definitely contact a couple of times [but] I was more concerned about not being able to be as efficient in the braking, and to be vulnerable like that.

“Yeah, certainly a bit of contact, but that’s the way it goes at moment.

“I’ll just focus on being more competitive and we’ll press on; that’s the main thing to worry about for me.”

Van Gisbergen’s side of the story was that “they missed the apex by two car widths and I filled the hole.”

He reasoned that a bit of contact is better than watching a procession.

“I wasn’t just smashing them on purpose but, you know, you’re allowed some rubbing on the exit of the corner,” said the New Zealander.

“I don’t know, they braked a bit early and then they went wide, so I just shoved it down the inside and got on the throttle early and got alongside them.

“Yeah, I rubbed them, but that’s what we want – or, what we’re allowed to do – so I drive like that.

“But, I’m sure… I don’t know, I could have followed them around for 44 laps, but people complain about that too.”

No investigation into either pass was reported by stewards.

Van Gisbergen won the race by 2.8s over Davison, with Waters finishing another 3.5s back in the #6 Monster Energy Mustang.