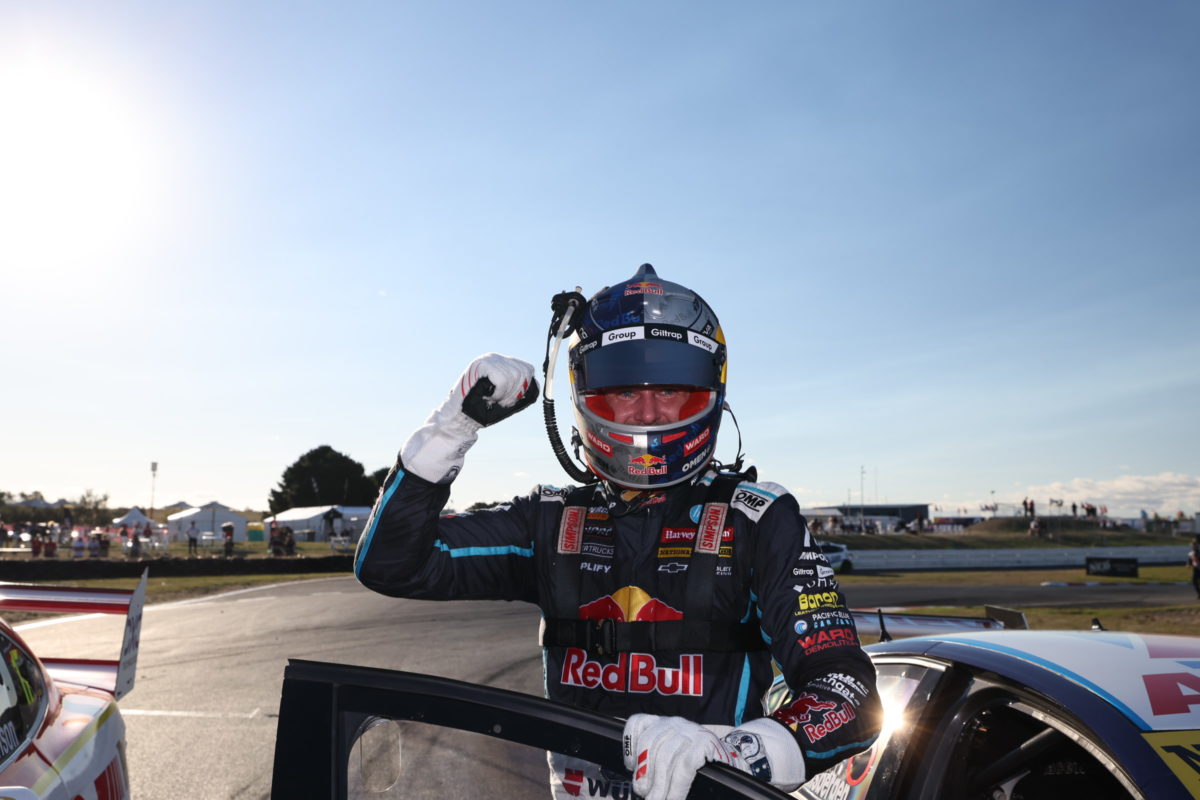 Shane van Gisbergen has won Race 3 of the Repco Supercars Championship at Symmons Plains while Chaz Mostert lost the lead in the standings after a tangle with Mark Winterbottom.

Van Gisbergen won the first race of the Ned Whisky Tasmania SuperSprint by almost three seconds, coming from fifth on the grid after some aggressive driving in the #97 Red Bull Ampol ZB Commodore.

Mostert began the 44-lapper on the back foot after qualifying only 13th, and was running 10th when he got caught up in an incident between Winterbottom and David Reynolds in the final eight laps.

The Walkinshaw Andretti United driver had to pit for a new tyre on the mangled right-front corner of his #25 Mobil 1 Optus ZB Commodore and eventually got home three laps down in 23rd position.

In the championship, van Gisbergen is back on top with a 17-point margin over Anton De Pasquale (#11 Shell V-Power Mustang), who salvaged sixth in Race 3 from well down in the field, while Mostert has dropped to fifth on the table at 49 points off the pace.

Back when the lights went out, Davison (#17 Mustang) made the better launch of the front row starters but got held wide by pole-sitter Waters at Turn 2 and dropped to third, behind Brodie Kostecki (#99 Boost Mobile ZB Commodore).

Davison reclaimed second spot as they ran down the back straight, and Kostecki wore a nudge from a strong-starting van Gisbergen when he covered to prevent the loss of any more positions at Turn 6.

Behind them, Scott Pye (#20 Seiko 5 ZB Commodore) and Broc Feeney (#88 Red Bull Ampol ZB Commodore) were chopping and changing position, with the former prevailing in that battle for fifth after a handful of laps.

Van Gisbergen had a dive at Kostecki on at Turn 6 on Lap 5 and eventually made the move for third stick by the time they got back around to Turn 2, before setting his sights on Davison.

The 2021 champion pulled off the pass of the #17 Mustang when they ran down the back straight on Lap 10, as Waters moved his advantage at the head of the field beyond a full second.

However, van Gisbergen reeled him in over the next few laps, and was soon on the tail of the #6 Mustang.

He gave Waters a bump as they exited the Hairpin on Lap 17, and there was more contact as they dragged down the back straight, before #97 took over the race lead into Turn 6.

Davison was 0.9s from the lead when he pitted from third spot at the end of that lap, and Waters had dropped to 0.8s off the back of van Gisbergen when he stopped on Lap 18, with both taking fresh rears.

Van Gisbergen was into the lane another lap later, also taking rears only, and he got back out just ahead of Davison, who had jumped Waters in the cycle courtesy of possibly the undercut but also a quicker service.

Mostert had clawed his way into the top 10 before the pit cycle was on in earnest, and he went until Lap 25 before stopping for another pair of rear tyres.

Once the cycle was done on Lap 31, van Gisbergen led by almost a second over Davison, with Waters more than three seconds off the lead in third.

Kostecki sat fourth, from Pye, Feeney, and De Pasquale, who had been shuffled back to 20th in the cut and thrust of the opening laps before taking an early pit stop.

Rounding out the top 10 at the time were Reynolds (#26 Penrite Mustang), Winterbottom (#18 Irwin Tools ZB Commodore), and Mostert.

The latter three were at the centre of major drama on Lap 37 when Winterbottom tried to set up a move on Reynolds down the back straight, but succeeded only in making contact which turned both of them around exiting the Hairpin.

Mostert could not avoid contact with Winterbottom, who would soon be slapped with a 15-second time penalty for his part in the incident, as van Gisbergen continued to stretch his lead.

In the end, the Triple Eight Race Engineering driver took the chequered flag 2.83s up on Davison at the head of the field, and 6.29s clear of Waters.

Kostecki finished fourth, Feeney fifth, and De Pasquale sixth, making his tyres last despite the super soft compound being used for the first time at Symmons Plains this weekend.

Winterbottom was officially classified 18th and Reynolds ended up 21st, meaning he misses out also on the five bonus points for setting the fastest lap.

Nick Percat finished six laps down in 24th after incurring steering damage in the #2 Mobil 1 NTI ZB Commodore, with Jack Le Brocq (#34 Truck Assist ZB Commodore) the sole DNF after also getting caught up in an early stoush.

The Supercars Championship field is next on-track tomorrow morning for back-to-back qualifying sessions from 10:35 local time/AEDT.