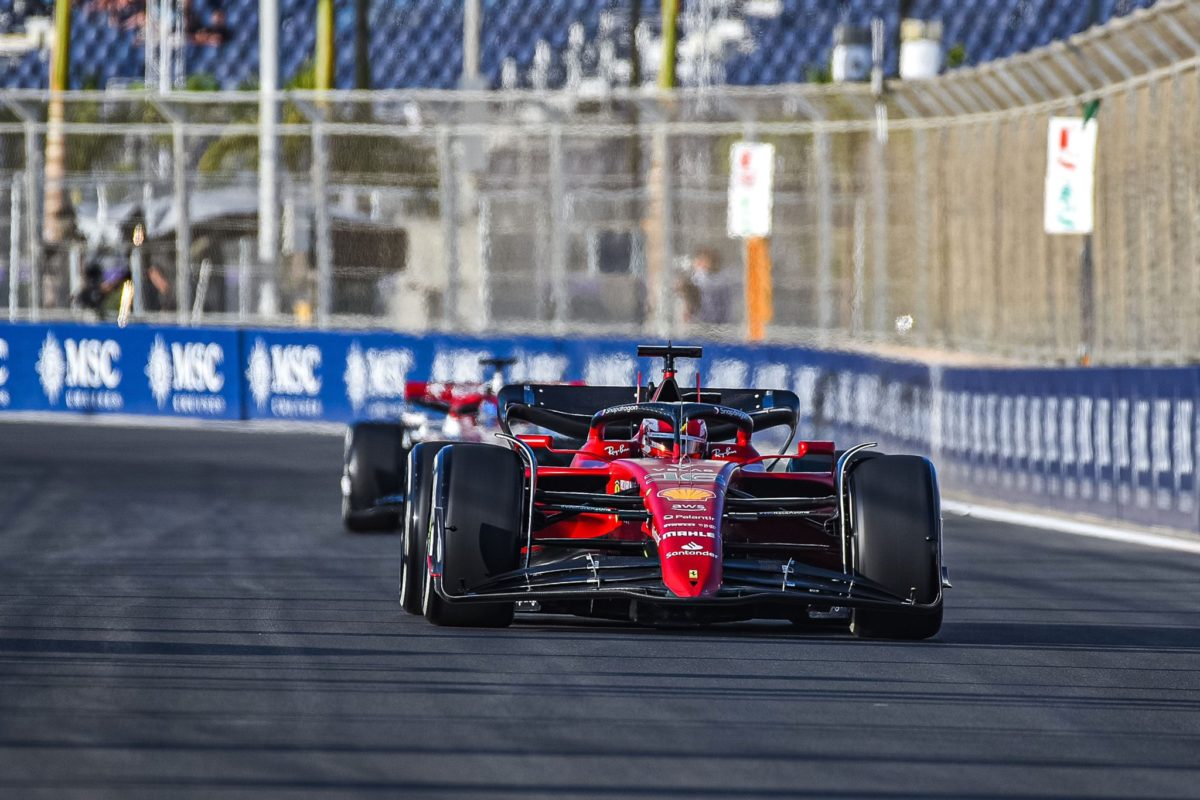 The Ferrari driver pipped Max Verstappen to top spot by just over 0.1s with Valtteri Bottas improving late in the piece to lock down third.

A dusty circuit welcomed drivers out on track, with much of the field venturing forth as the session began.

Both Mercedes drivers did so on a set of soft compound tyres, while the 16 other runners opted for a mixed for hard and medium compound rubber.

The only team not on track in the opening minutes was Ferrari, with both Leclerc and Sainz remaining in the garage – the former not even in his car with five minutes of the session run.

Max Verstappen set the early pace, with a 1:34.167s, a time set just moments before Haas called Kevin Magnussen into the pits.

The Dane was instructed not to change gear, suggesting a gearbox or hydraulics issue in the car.

Verstappen improved his earlier effort with a 1:31.885s inside the opening 10 minutes, the Dutchman out on a set of hard compound tyres.

At Alpine, Fernando Alonso boasted a new internal combustion engine after the team detected an issue in the unit that had been fitted.

Haas duly confirmed Magnussen’s car did indeed suffer a hydraulic leak, a fault which would likely necessitate a radiator change.

While that was going on, Verstappen had lowered the benchmark to 1:31.298s.

The red flag was shown with 17 minutes to run after the 50 metre marker board came loose and fell on the track, collected by Lando Norris.

An eight-minute interruption followed as the debris in track was cleared away.

Once running resumed, both Ferrari drivers headed out on a set of hard compound tyres.

Those who’d headed out on medium compound tyres earlier had ditched those, with hard and soft Pirellis the order of the day.

Already fastest, Verstappen moved the bar even lower with a 1:30.888s, a time which saw him 0.8s clear of second-best Yuki Tsunoda.

The AlphaTauri driver was only 0.008s quicker than team-mate Pierre Gasly, while Sergio Perez was fourth best but 1.2s off the outright pace.

Leclerc moved up to second fastest with a 1:31.470s with 21 minutes remaining, the championship leader on a set of the hard compound tyres.

That became third when Gasly improved, grazing the wall en route to a 1:31.317s.

Having run different rear wings between Hamilton and Russell’s cars, the latter switched to the lower downforce variant used by the former.

Russell say 14th inside the final 10 minutes of the session, while Hamilton was seventh best, 1.4s away from Verstappen’s ultimate pace.

Valtteri Bottas rose to third fastest from Sainz fourth, pushing the AlphaTauris of Gasly and Tsunoda to fifth and sixth respectively.

Magnussen ended the session in the garage, never emerging following his dramas earlier in the session to leave him with just two laps to his name.