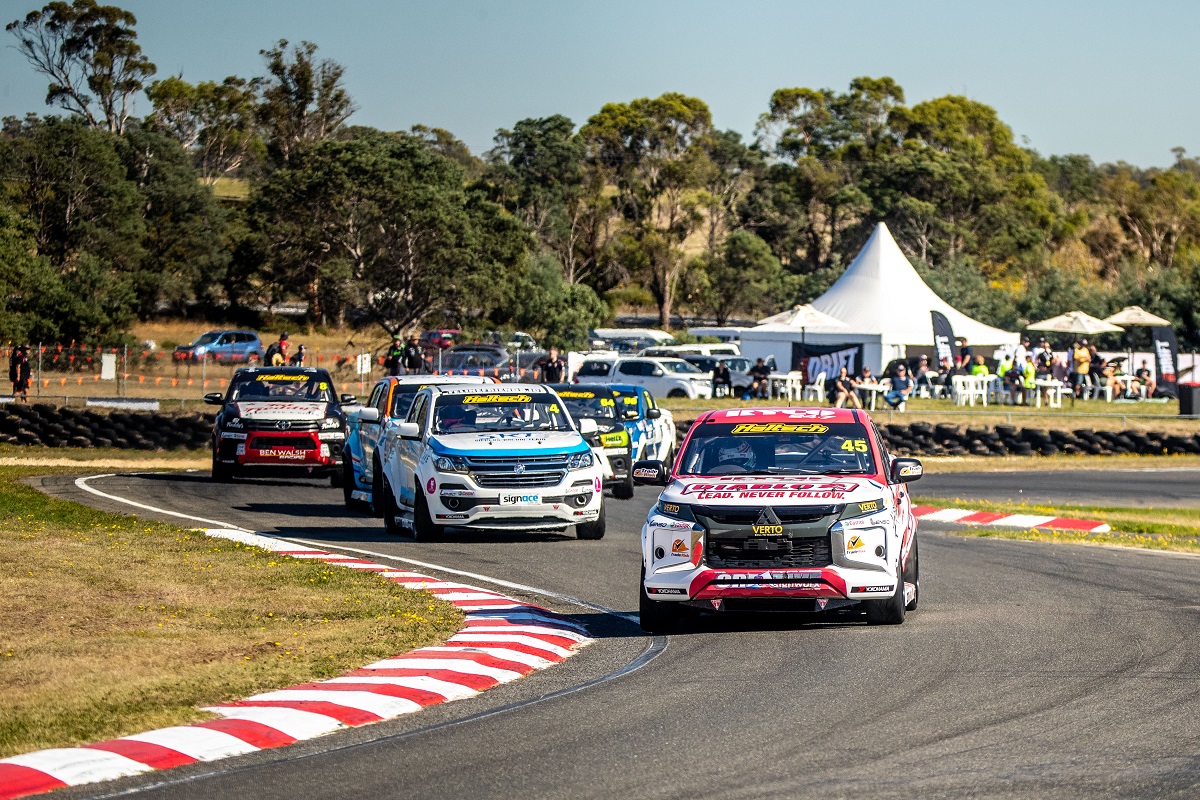 Craig Dontas won Race 1 before Craig Woods prevailed in Race 2 in Round 1 of the Haltech V8 SuperUte Series at Symmons Plains.

Dontas led the latter 10 of 16 laps and took the Race 1 chequered flag seven tenths of a second clear of Sieders Racing Team stablemate Aaron Borg, with Woods rounding out the top three after an eventful morning.

Woods had qualified on pole position but found himself trailing Borg and George Gutierrez as they negotiated Turn 2 for the first time, although he managed to round up the latter at the Hairpin later that lap.

He was back at the head of the field when he eventually forced his way past Borg at the start of Lap 2, but also made room for Dontas to take over second position when he did so.

Dontas went down the inside of Woods at Turn 6 on Lap 6, put more than second on the field in the next two laps, and went on to clinch victory with a margin of 0.7s over the rest.

Some of that gap was down to a big moment which Woods had as he exited the Hairpin on Lap 7, the #64 Toyota Hilux fishtailing all over the road but somehow brought back under control in the end.

The Western Sydney Motorsport driver dropped from second to fifth as a result, but was never out of the fight for the minor placings.

He would in fact soon find himself in a battle for third with Gutierrez, making the decisive pass at the end of Lap 12 and going on to finish 1.2s behind Borg.

Gutierrez, Ben Walsh, and Jaiden Maggs were next in the order, and hence at the front when the top six was reversed to set the starting grid for Race 2.

Walsh got the jump for that one but it was not long before team-mate Woods had made his way to second position, and then caught Car #8 by the end of Lap 4.

He elbowed his way through as they rounded Turns 6 and 7 on Lap 5, seconds before a Safety Car was called because Rohan Barry had spun into the gravel at Turn 2.

The restart came on Lap 8, and it was on Lap 10 when Walsh dropped a wheel off exiting Turn 2, which caused him to cede position to Dontas and Borg.

Those three then became embroiled in a big battle for second place which was ultimately resolved in favour of Borg.

After 20 laps, he took the chequered flag 1.4s behind Woods, who bagged his first SuperUtes race win since the final round of the diesel era, in Newcastle in 2019.

Dontas wound up third, from Walsh and Gutierrez.

In Round 2 of the Battery World Aussie Racing Cars Super Series, Josh Anderson had a narrow victory over Cody Brewczynski in Race 1, before Tom Hayman won Race 2 by more than 11 seconds.

Both categories will be back in action with two more races each tomorrow at the Ned Whisky Tasmania SuperSprint.