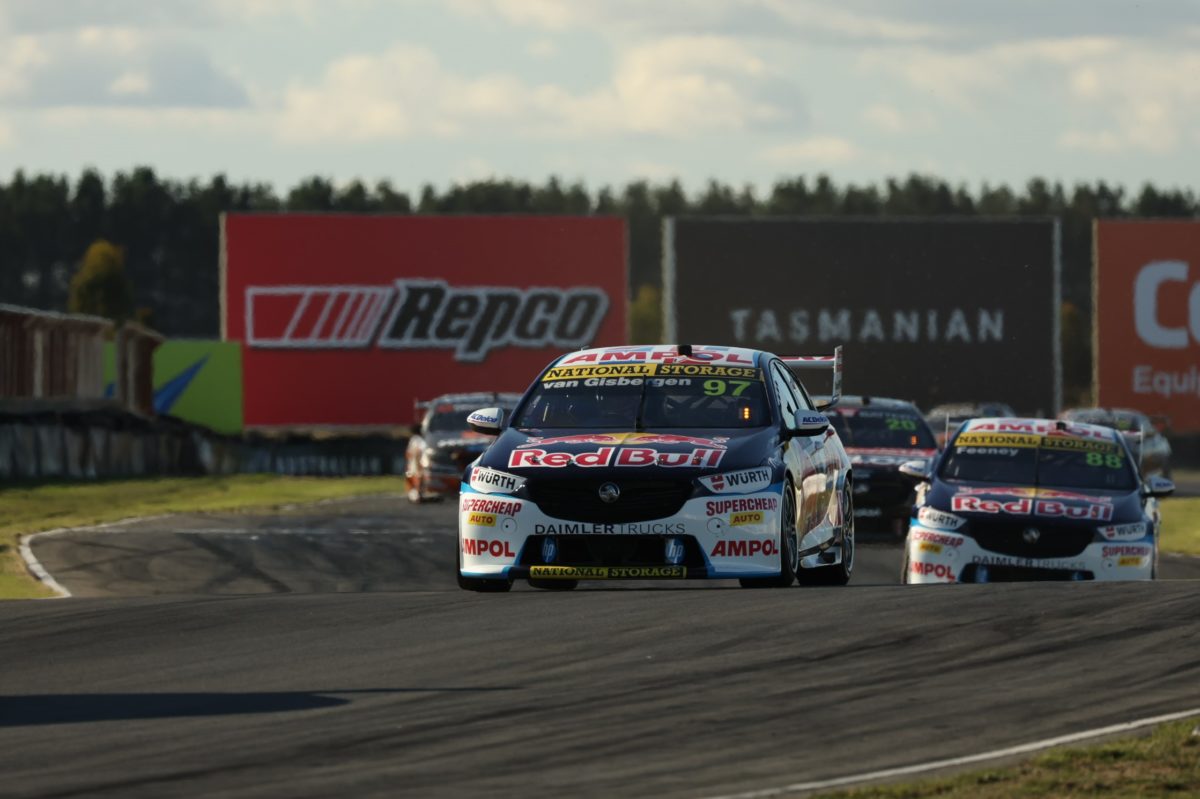 Marcos Ambrose has given high praise to Shane van Gisbergen for his aggressive overtaking moves on the way to winning Race 3 of the Repco Supercars Championship at Symmons Plains.

Van Gisbergen qualified fifth for the opening race of the Ned Whisky Tasmania SuperSprint weekend but emerged fourth from the opening corners and was up to third when he got by Brodie Kostecki at the start of Lap 6.

That was impressive enough, given the Red Bull Ampol Racing driver did so by hanging on the outside of Kostecki over the undulations of Turn 1, but his passes of Will Davison and then Cameron Waters were also wild.

On both of those occasions, the 2021 champion gave his Ford adversary a bump at the Turn 4 Hairpin to set up the drag race towards Turn 6, and even had more contact with Waters as they ran down the back ‘straight’.

CLICK HERE for the thoughts of the drivers involved

Symmons Plains is sometimes described as the closest thing that Supercars has to an oval, and Ambrose, as a NASCAR driver of almost a decade in addition to being a two-time Supercars champion, is well-qualified to comment on the types of side-draft moves that van Gisbergen pulled off.

Asked post-race if the New Zealander was too aggressive, Ambrose, working this weekend as a television pundit, responded, “I say, heck no.

“He made the pass, he put his car in position, and the other drivers he was passing, they didn’t like it, but they couldn’t do anything about it once he’s made that move.

“He’s just breaking new ground on these passes, the way he’s going about it; it’s quite exceptional, to be honest.

“I thought it was just really hard racing [and] it was fair racing eventually; like, everyone finished the race.

“It was just hard, tough driving.”

Stewards reported no investigations into Car #97 post-race, but that does not mean that what went on was not at all without risk.

“He is right on the edge with everything he does,” remarked Ambrose.

“He’s done some stuff here at Symmons Plains today that I have never seen.

“I mean, treacherous stuff. The exhaust pipe from the Mustangs was right there on his right-front wheel, somehow he didn’t cut a tyre down, he was able to slow their momentum, and make the passes.

“Just quite an incredible race by Shane today.”

Van Gisbergen’s win, his second of the season, puts him back on top of the championship table, by a 17-point margin over Anton De Pasquale.

Proceedings resume tomorrow at 10:35 local time/AEDT with qualifying sessions for Races 4 and 5 of the campaign.