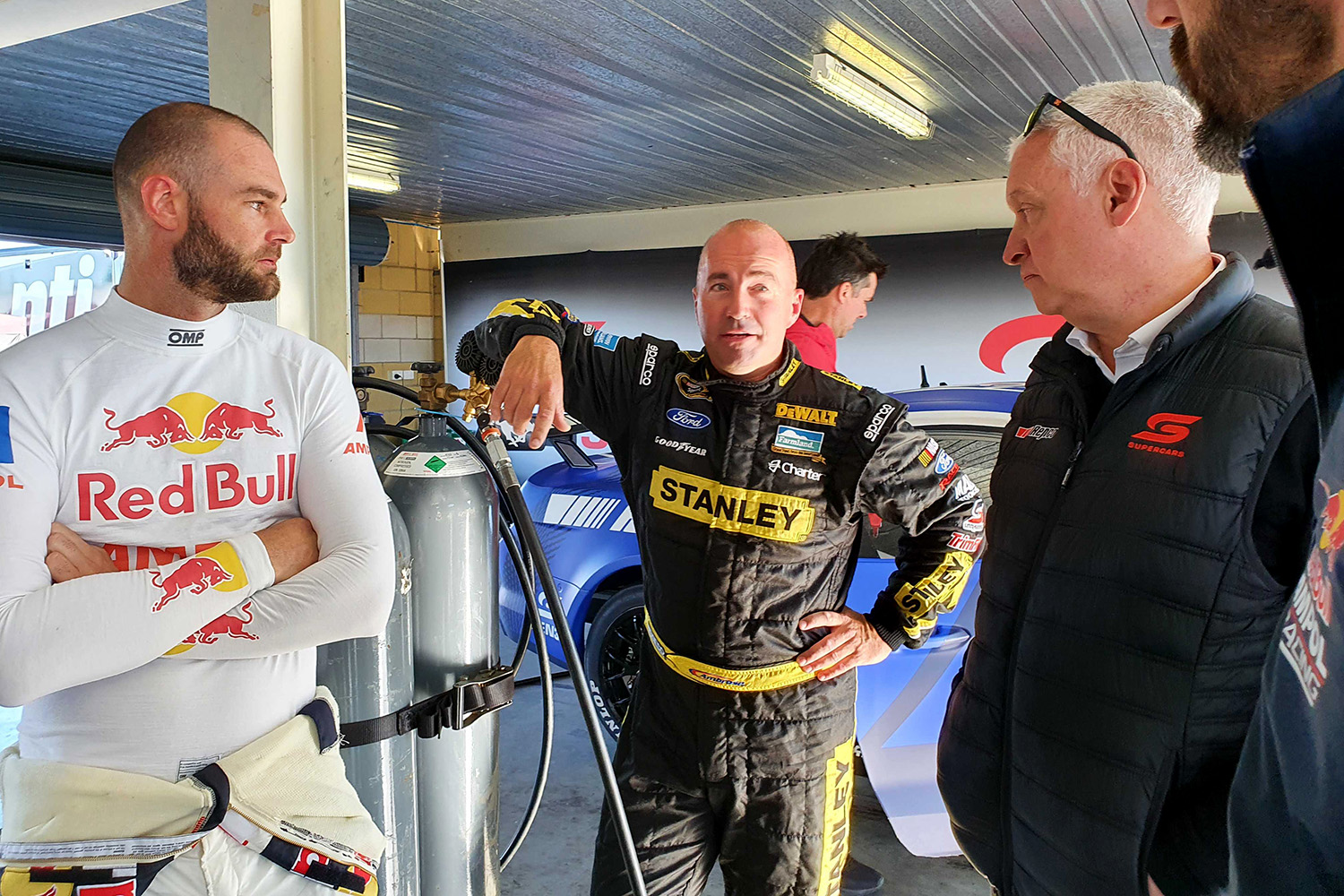 The Tasmania native got his first taste of the new-look Ford Mustang at his home circuit, Symmons Plains International Raceway, this morning.

He joined Shane van Gisbergen on track, the fellow dual champion behind the wheel of the Chevrolet Camaro.

The laps marked the first for the Ford Mustang since ergonomic changes were made to the cockpit and a manual sequential shifter was installed.

Ambrose, who will form part of the presenting line-up at the Ned Whisky Tasmania SuperSprint this weekend, jumped out of the car smiling.

“In my position here, you had to be Switzerland a little bit – got to be neutral,” said Ambrose.

“But I will say that straight away we’re down into the 53’s. For me, as a guy who’s been out of the seat for ages, there’s plenty of speed in the car.

“The handling and everything, they’re working on some stuff, but for me, it was pretty exciting to see the car go that hard that quickly.

“I was very comfortable in the car as well, so I think they’ve sorted out the ergonomic issues.

“They’ve had a lot of flak with Gen3 I guess with the delays and issues and bits and pieces, but for me, first time seeing it, first time driving it, I reckon they’re 90 percent there.

“They’ve just got to tidy up the little bits around now and let the teams get the cars going and get them running.

“As soon as the teams get a hold of these cars out, they’ll get the last 10 percent out of them. I’m excited for it.”

Ambrose has driven every generation of Supercar from Project Blueprint, Car of the Future, Gen2, and now Gen3.

Although Ambrose recognised that with every generation the cars have become more refined, he was quick to note that Gen3 has a “raw” feel about it.

“The sport has moved on from the early days, there’s no doubt about it,” he said.

“With the sequentials, the transaxles, big brakes, big wheels, for me, old school racing is all about sliding the car around and sort of having to muscle it.

“These cars are more refined, and that’s the way most sport has gone in the world. So I think it’s actually a great balance between what it used to be and what motorsport is today.

“The car I just drove, the Gen3, it’s a raw car. Now some of it’s still because it’s in some development, but some of it is just because the bones that are underneath.

“It’s moving around and you’ve got to sort of fight a little bit. It wants to tuck the nose under and break loose. It’s not a silky ride. You can feel the bumps.

“The power delivery is not quite there yet, some of it’s R&D, probably. You want it to be not easy to drive.”

The Gen3 cars will feature on track over the three days of action at the Tasmania SuperSprint before testing takes place on Monday and Tuesday next week.