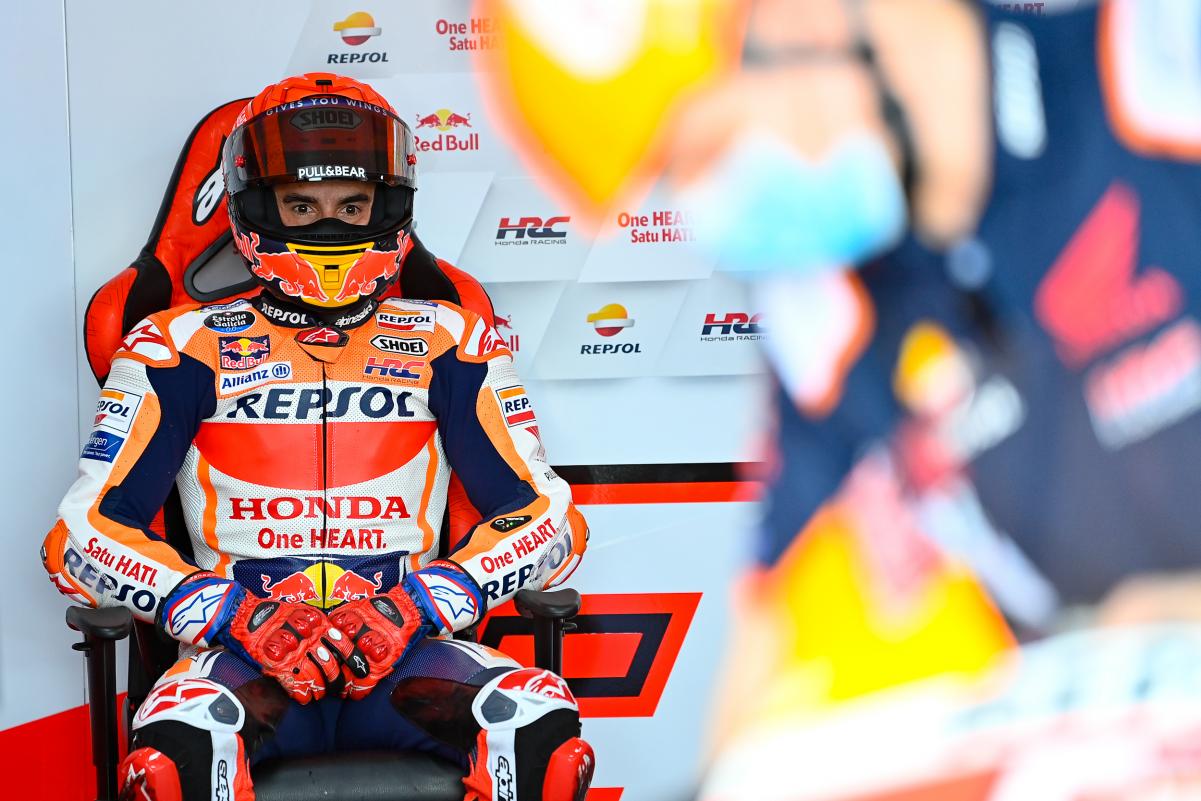 Marc Marquez has suffered a relapse of double vision after his monster highside in the Warm Up for the Indonesian MotoGP.

The six-time premier class champion was hurled from his Repsol Honda when the back end kicked out at Turn 7, and missed the race which followed that afternoon due to concussion.

While he was cleared of major injuries when he underwent a CT scan in a local hospital after the crash, he suffered discomfort with his vision on the way back to Spain after the event and made an emergency visit to the Hospital Clínic de Barcelona.

Now, the factory Honda team advises that he has been diagnosed with diplopia, just months after suffering the same condition when he crashed a motocross bike in training.

According to his eye doctor, Marquez once again has paralysis of the fourth right nerve in the eye, the same which he damaged in a Moto2 crash in 2011.

As yet, there is no certainty on when he will be fit to return to competition, having only just come back after missing the last two rounds of 2021 due to those vision problems.

Dr Sánchez Dalmau, the Spaniard’s regular ophthalmologist, said, “The neuro-ophthalmological evaluation carried out on Marc Marquez on Monday after the head injury that occurred at the Indonesian Grand Prix, shows a new episode of diplopia caused by a recurrence of paralysis of the fourth right nerve, with less involvement than the one that occurred in the injury in November 2021.

“After this examination, it was initially decided to follow a conservative treatment with periodic medical tests.

“Next week, Marc Márquez will undergo a new check-up to evaluate the evolution of the injury and to predict the estimated recovery period to return to competition.”

There, he underwent a general medical check-up on the bruising from the crash and also an MRI, which reaffirmed that he did not suffer any other injuries.

According to Marquez himself via social media, the eye injury is “less serious” than last year’s.

Fortunately, it is less severe than the injury I had at the end of last year. But now it’s time to rest and wait to see how the injury evolves. As always, thank you very much to everyone for your support!! (4/4)

Nevertheless, this could be third year in a row in which the 29-year-old is sidelined for part of the campaign, after sitting out virtually the entirety of 2020, and the start of 2021, due to badly breaking his arm in at Jerez.