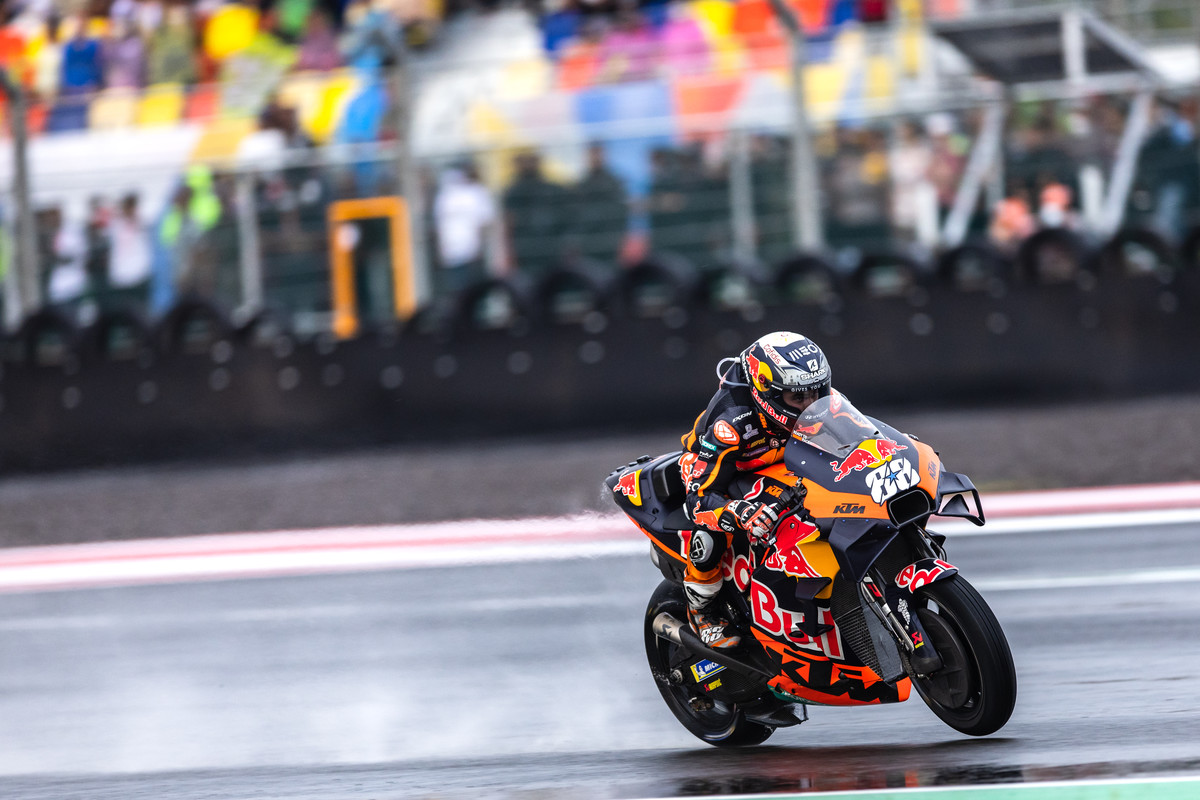 KTM is remaining grounded despite winning the Indonesian Grand Prix and leading MotoGP’s teams’ and constructors’ championships for the first time.

The Austrian marque was in serious trouble during pre-season testing but then managed to turn its RC16 into a package which Brad Binder took to second place in the Qatar Grand Prix.

Come Round 2 of the season at Mandalika, Miguel Oliveira went one better when he prevailed in challenging, wet weather conditions on the other Red Bull KTM Factory Racing entry.

Binder could only manage eighth after a ride height drama but remains second in the championship and is now a reduced, two-point margin off the top, while his Portuguese team-mate is just three points further behind.

KTM’s first and second placings so far trump Ducati’s first and third, by four points, and Mattighofen’s factory team is 12 points clear of Monster Energy Yamaha at the top of the teams’ standings.

Despite their results on two quite different circuits, in completely different conditions, Oliveira is not getting carried away.

“I think is very early to say because we only had two races,” he said regarding whether or not KTM will be a consistent presence up the front in 2022.

“For sure, we want to keep this strong condition going into other races as well. We just don’t want to perform three times or four times during the season and then just be average; we want to be up there more often.

“We are aware that we need to work really hard, that’s the normal of this category; everyone is so close together, and you see the difference that sometimes it makes being in Q2 or not, so it can turn your whole weekend around.

“So, we are focusing on being fast first of all, and then just being able to produce good performances in the race and score points.”

“We will not change the goals, but we will see how the season develops from week to week,” said the German.

“MotoGP is a lot of fun for us at the moment because we are hiking through the GP weekend differently and are not dependent on Brad Binder exploding on Sunday.

“We’re actually doing well in every practice session now, so the weekend builds up on a more solid basis. This leads to better results in qualifying and in the race.

“But we are still on a thin sheet of ice. We all have to keep our feet on the ground and stay focused and keep going.”

Oliveira had passed Fabio Quartararo for the lead at the end of the first lap, only to himself cede position to Jack Miller less than a lap later again.

He got back in front of the Australian on Lap 5, from which point he was never headed, and credited that period behind #43 when he could assess the rainy conditions as key to the win. 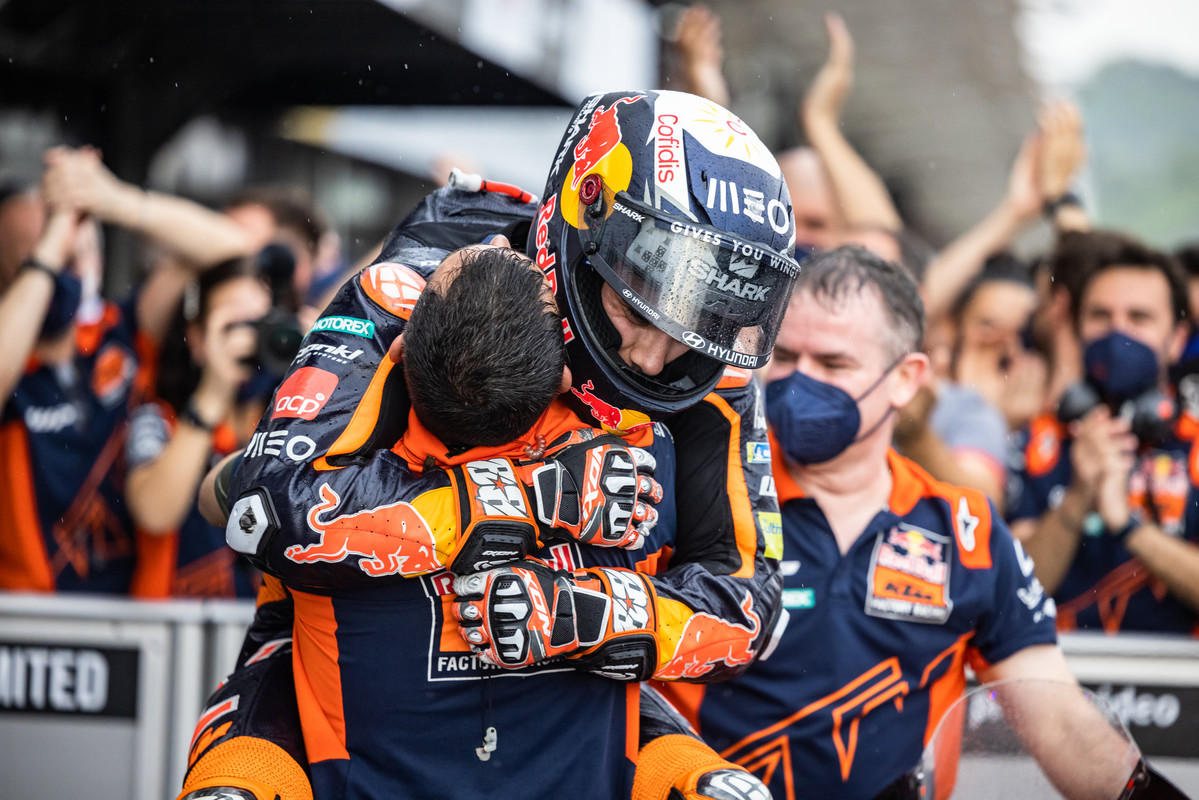 “Going behind some riders helped,” explained the #88 KTM pilot.

“I just tried to maintain that without taking a lot of risk and making any mistakes.

“I think without this good start the race could have been a bit different for me. I really couldn’t see behind the other riders with the spray and a lot of rain on the visor – it was definitely hard to be precise.

“It was also hard to judge the grip level, and I think by the end of the race I was able to see how much I could push.”

While Oliveira did win, Binder felt his eighth position was as good as a win under the circumstances.

The South African completed virtually the entirety of the 20-lap grand prix with his ride height device stuck down.

“I’m really disappointed because I felt good all weekend, especially on the wet tyres,” said Binder.

“After the start, something happened with my ride height device.

“Every time I braked it would come up, I’d turn, let go of the brake, and it would drop down again. I did the whole race with the ride height device completely down.

“Considering I finished eighth, I think it’s a win. If it was a dry race, I wouldn’t have been able to do anything. Because of the [wet], we got really lucky and managed to finish.

“In general, I’m happy. I managed to bring the bike home, which was really difficult.

“It doesn’t turn when the ride height device is down. We need to figure out what happened and make sure it doesn’t happen again.”

The next MotoGP round is the Argentina Grand Prix at Termas de Rio Hondo on April 1-3 (local time). 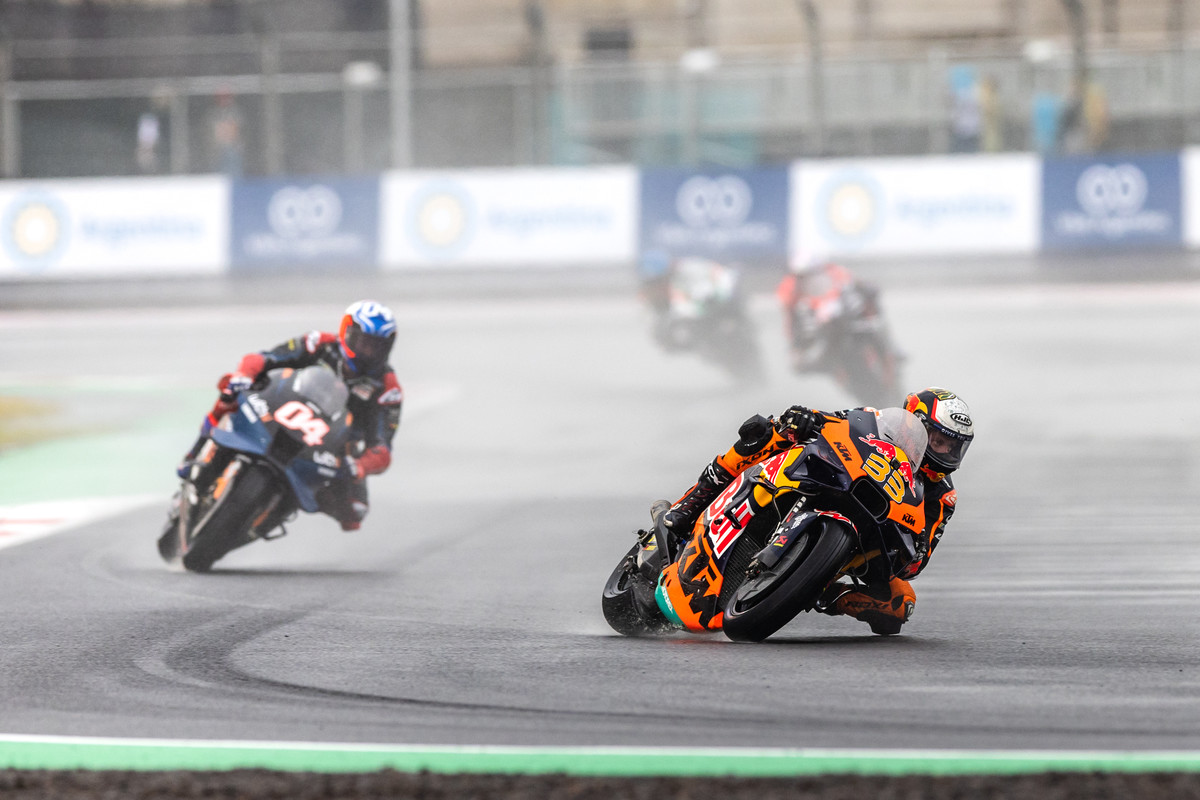