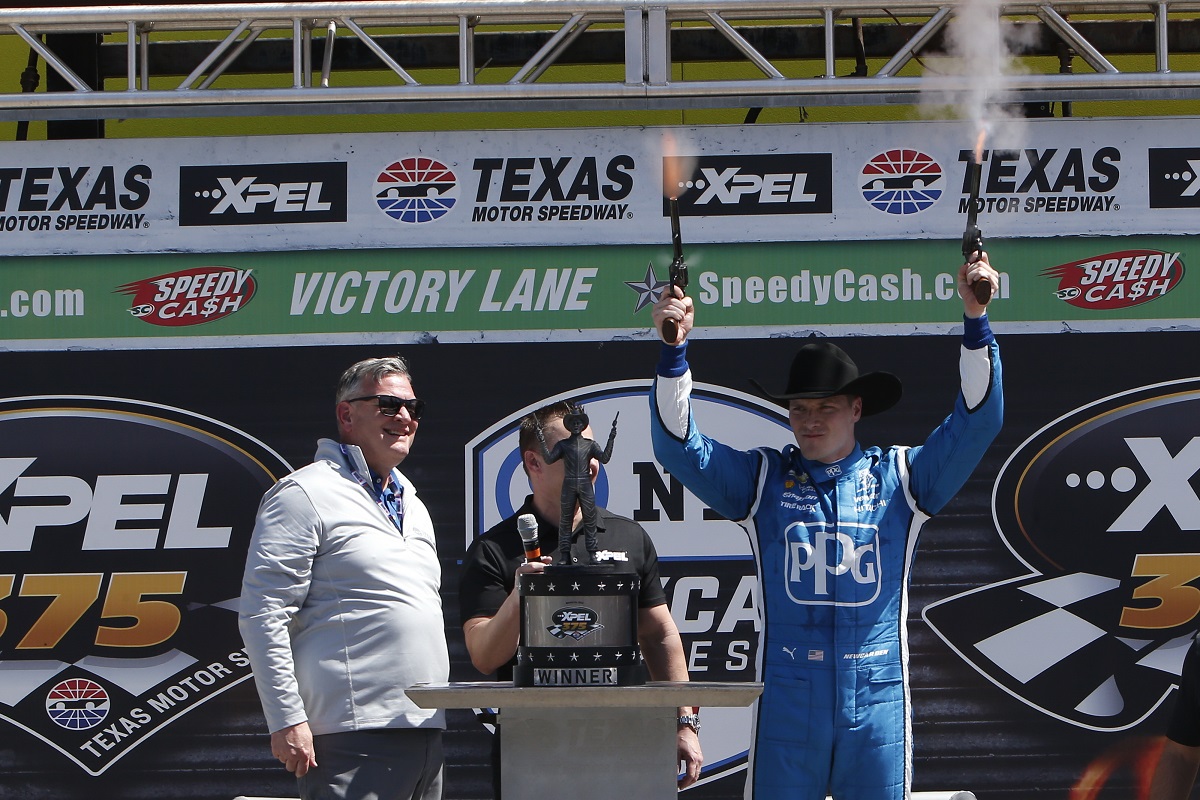 Josef Newgarden committed to an all-or-nothing scenario when he overtook team-mate Scott McLaughlin at the final corner to win the Texas IndyCar race.

Newgarden followed the #3 Team Penske Chevrolet for much of the 248-lapper, sometimes more than 12 seconds back, but just tenths behind as traffic became an issue in the closing stages.

When McLaughlin got held up by David Malukas on the final lap, the two-time champion seized the opportunity to go to the outside and pinch victory by just 0.0669s.

Much of the pre-event talk centred on how treacherous the high line at Texas Motor Speedway was going to be, and IndyCar even held a special practice session in a bid to address the lack of grip up top.

Newgarden, however, was prepared to take a punt on crashing given the reward on offer.

“[My] mindset changed as soon as I got to corner three,” he laughed.

“The traffic just presented a great opportunity to really – I don’t want to say the words – but get after it, try to do something to win this race.

“If I don’t hit the fence, I don’t know what’s going to happen.

The Tennessean survived a damaged tyre in his first stint and had dropped back during the second-last stint as drivers played a cat-and-mouse game over fuel usage.

Despite getting back in the podium positions for the run home, he had in fact given up on winning the race until the presence of Malukas gave him a chance.

“It was a race of patience, for sure, for us at least,” recalled Newgarden.

“We tried to manage all the way throughout. We had a lot of adversities to work through. We had a right-front that was coming apart on the first stint.

“We got through that. It actually worked out pretty well. We cycled up to second – Scott was way up the road – [but] started closing the gap. Obviously had the big yellow in the middle.

“Kind of the final restart, I just got my doors blown off by everybody. There was a tonne of fuel to save at that point [and] it seemed like no one was worried about doing that right away.

“I must have gone back to sixth or seventh [then] kind of methodically got back forward.

“At the end, I was like, ‘Scott is going to be hard to beat with traffic’. He’s been strong this whole time, he was strong last year, strong at the test.

“I thought if we just had clear running, we would have a great fight; we probably would have been dicing back and forth the entire time.

“It gets so difficult when you have cars that are about to go a lap down, fighting each other. Scott is trying to manage that. Hurts me to be able to close up on end.

“At the end, I literally conceded with two laps to go; ‘It’s just not going to happen.’

“I literally almost lost it off [Turn] 4 pushing hard to go ahead close, so I was like, ‘It’s done, he did a good job, he was in position, he’s going to win this race; just bring it home.’”

The win was Team Penske’s 600th across the entire organisation, and Roger Penske himself had a special reward for Newgarden afterwards.

Penske drivers finished first, second, and fourth on the day, and it is the same story in the series standings, albeit in a different order.

McLaughlin retains top spot on the table, 28 points ahead of Will Power in second and another four up on Newgarden in fourth.

The third event of the season is the Grand Prix of Long Beach on April 8-10 (local time), with live and ad-free coverage on Stan Sport.