Miller in spat with Quartararo over Mandalika MotoGP clash

Miller in spat with Quartararo over Mandalika MotoGP clash 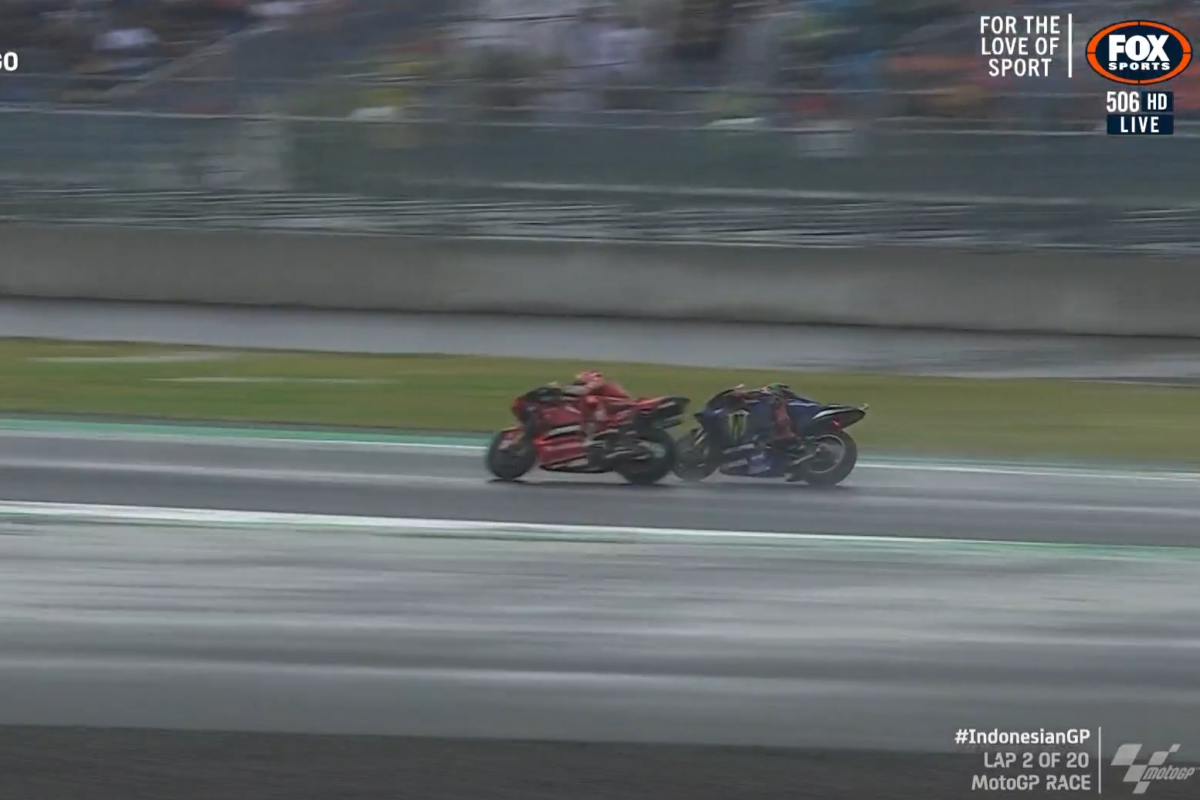 Jack Miller and Fabio Quartararo have traded barbs in the media over a coming-together early in the Indonesian Grand Prix.

Quartararo qualified on pole but struggled initially in wet conditions at Mandalika after the start of the race had been delayed by more than an hour.

Miller, on the other hand, was into the lead before the second lap was done, despite starting from ninth on his Ducati Lenovo Team entry.

During that rapid rise, he overtook the #20 Monster Energy Yamaha for second position at the start of Lap 2, after Quartararo had broken into wheelspin exiting Turn 17 at the other end of the main straight.

Then, Miller claims, the 2021 world champion rode into the side of him as he executed the pass at Turn 1, which left him angry post-race.

“Well, it wasn’t a fight,” said the Queenslander.

“I just passed him and he rode his motorcycle into the side of my leg, quite clearly like he did to Johann [Zarco].

“I don’t think it’s necessary when someone passes you to immediately accelerate towards their front tyre. I will quite happily have a word with him about this because it’s not on.

“As we saw with Johann, you pass ‘okay, that’s fine’, the Yamaha turns well ‘okay’, but that doesn’t mean you open the gas and aim for the front tyre.

“I don’t think that’s fair. He rode into the side of my leg and I clearly had better pace at that point in time.

“I came from ninth on the grid and was faster than him. It was just an unnecessary risk at that early stage of the race to be running into my leg.”

Quartararo admitted there was contact, but said it was minor and unintentional.

The Frenchman turned the issue back onto Miller, claiming #43 is himself aggressive.

“I don’t care because he’s the one in the past that has some aggressive moves.

“I think my move was also not aggressive; just I didn’t expect to touch.

“My touch was not something big, it was a really small touch and I don’t know if he watched on TV, but he better watch because I did nothing wrong.”

Quartararo had not spoken to Miller at the time of that comment, but he knew the Ducati rider was far from pleased.

“He was talking to me on the bike but I couldn’t hear anything, but he was not happy,” recounted ‘El Diablo’.

“But I didn’t make any strange moves like I attack[ed] him so bad or not.

“He just overtook me in Turn 1 and I saw he was going wide and I just crossed the line.

“So, I would also like to have the comments from other riders on if it was a non-respect[ful] move or not.

“From my point of view, if I make a bad move, I say sorry, but that one I have nothing to say.”

From as low as fifth, Quartararo fought his way back to second at the finish, 2.2s behind Red Bull KTM Factory Racing’s Miguel Oliveira.

After a poor Qatar Grand Prix, Quartararo is now third in the championship at just three points off top spot with two races in the books.

Miller, who failed to finish at Lusail due to an electronics problem, is now 11th in the standings.

The next round is the Argentina Grand Prix at the Termas de Rio Hondo circuit, on April 1-3 (local time).