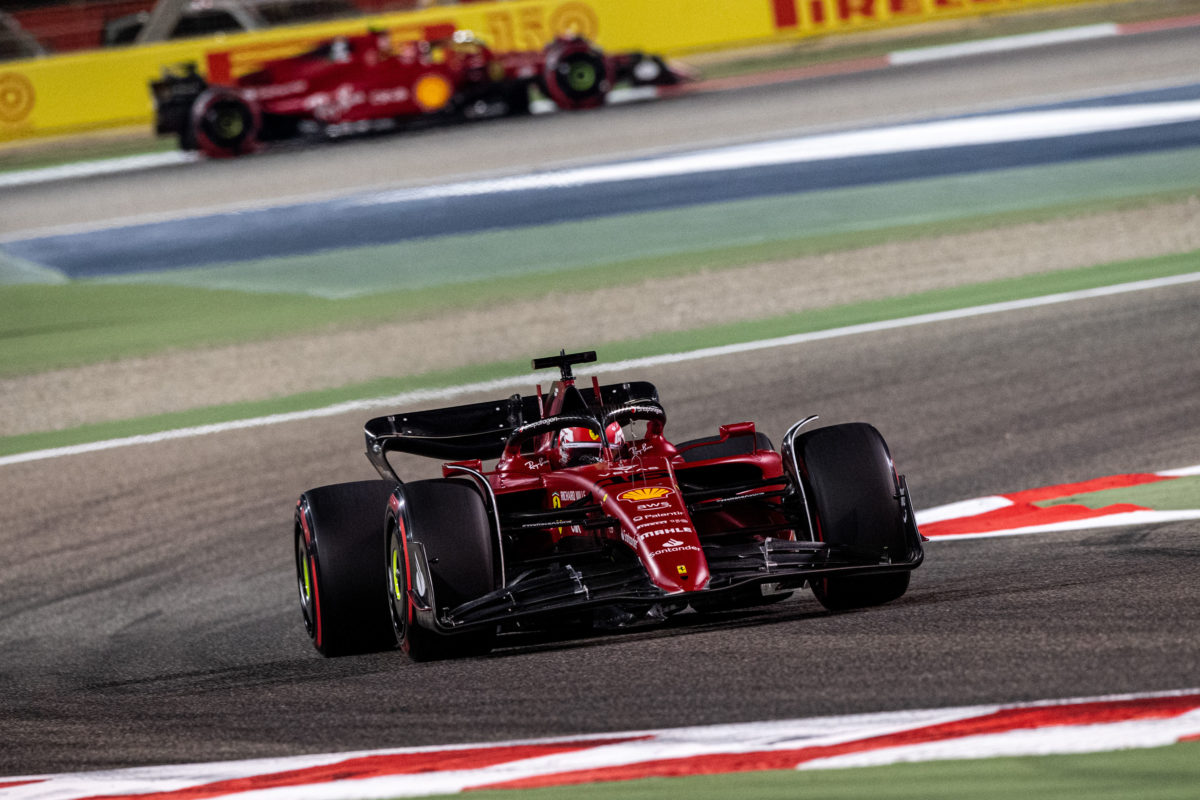 Charles Leclerc has won a sensational Formula 1 Bahrain Grand Prix as Ferrari opened its 2022 account with a one-two.

Leclerc controlled the race, fending off a mid-race challenge from Max Verstappen, who ended the race in retirement with four laps remaining.

Red Bull’s woes only deepened when Sergio Perez was forced out while running third on the final lap, promoting Lewis Hamilton onto the podium.

An even start for the front row saw Leclerc hold his advantage over Verstappen and Sainz into the first corner.

Behind them, Hamilton found himself under attack from Kevin Magnussen as Sergio Perez dropped two places in the opening corners.

A poor opening lap for Daniel Ricciardo saw the Australian last, two places down from his place on the grid.

A lock up from Magnussen as he started Lap 3 gave Perez the opportunity he needed, the Red Bull driver making the move at Turn 5.

Another mistake from Magnussen at Turn 1 opened the door for George Russell to move underneath the Haas and claim sixth place as they began Lap 5.

Perez reclaimed fourth place with a slick move on Hamilton as they ran to Turn 4 on Lap 10, benefitting from a better exit out of the first corner before taking the racing line around the outside of the Mercedes driver.

McLaren’s tough evening wasn’t getting any easier with Ricciardo instructed to cool the power unit.

The Australian remained 20th and last, a second behind Nicholas Latifi who in turn was 1.8s down on Norris.

Both McLaren drivers had started on the medium rubber while the rest of the field had opted for the softs.

Hamilton swapped his for a set of hard rubber when he stopped at the end of Lap 11.

Running fifth prior to the stop, he rejoined in 11th only to go deep at the first corner to cede the spot to Zhou Guanyu.

By the end of the lap, the Mercedes driver had generated enough tyre temperature to reclaim the spot on the Alfa Romeo Sauber heading into the first corner on Lap 13.

Third placed Sainz pitted at the end of Lap 14, swapping onto another set of soft compound tyres.

Verstappen also stopped; Leclerc called in next time around with Red Bull stopping Perez at the same time.

As the pole-sitter rejoined the race he found himself under attack from the 2021 world champion.

By stopping Verstappen a lap earlier, Red Bull almost managed to undercut the early race leader, though Leclerc was able to react and maintain his advantage out front.

However, with the pair in close proximity on track, it triggered a mighty scrap for the race leader.

Verstappen attacked down the front straight, his car trailing a shower of sparks, to seize the lead into Turn 1 as he began Lap 17.

Leclerc immediately fought back at Turn 4, using DRS to regain the upper hand to slide ahead of the Red Bull at the right hander.

Verstappen tried again next time around but Leclerc was again able to fight back in exactly the manner he had a lap prior.

At the third time of asking, the Red Bull driver snatched his inside brake at Turn 1, skating wide and allowing Leclerc back through with ease.

He then fell outside of DRS range as they completed the lap, leaving him unable to relaunch his attack on the Ferrari.

Verstappen quickly dropped further back, the Red Bull pit wall advising him to cool his brakes.

Halfway through the 57-lap affair, Leclerc held a 3.9s advantage with Sainz in third 11.1s off his Ferrari team-mate.

Perez was 2.6s further back in fourth from Russell, Hamilton having pitted at the end of Lap 27 for a set of medium compound tyres.

Verstappen stopped for a second time on Lap 31, moving onto the medium compound tyres.

Ferrari responded by pitting the race leader next time by, Leclerc turned around in a slick 2.5s.

He emerged from the pit lane with a small but comfortable advantage over Verstappen, much to the Dutchman’s frustration.

“That is two times I have taken it easy on the out lap and not been in front. I am never, ever doing that again,” he complained over team radio.

With the front two having pitted, Sainz led the race by 2.5s over Perez.

The instruction from the team soon after advised Verstappen he was free to push though he was seemingly unable to close the margin to Leclerc ahead.

The gap between the pair only increased as the laps ticked over, the gaps opening up throughout the field.

With 13 laps to run, Red Bull hauled Verstappen in for a third stop, Perez doing likewise from fourth.

It dropped the former to third behind Sainz but with a fresh set of soft tyres, the Spaniard stopping next time by in response.

There was panic inside Verstappen’s cockpit with a frantic series of exchanges between driver and pit wall amid complaints of heavy steering.

The Safety Car was called for when Pierre Gasly’s AlphaTauri caught fire, the Frenchman stopping exiting Turn 3 on Lap 46

Ferrari responded by pitting Leclerc, a strategic necessity as the race was neutralised.

He retained the race lead but had Verstappen once again locked onto his gearbox.

Recovery of Gasly’s car was delayed, orange lights on the roll hoop indicating the battery was in an unsafe state, and was finally cleared in time for racing to resume at the start of Lap 51.

At the restart, Leclerc bolted out of the final corner as Verstappen pinched himself on the apex trying to hustle the Ferrari.

That left him exposed to Sainz into the first corner, though the Red Bull driver held on as the race leader skipped out to a 0.8s advantage.

That advantage only continued to grow, the Monegasque holding a 1.7s lead to Verstappen at the end of Lap 51.

The Red Bull driver immediately slowed, bringing the car into the pit lane to retire.

It promoted Perez into third, the Mexican reporting a loss of power as he was hassled by Hamilton.

He ceded the spot by spinning at the first corner as they started the final lap, Perez reporting the engine had locked up.

It left Hamilton on the final step of the podium in a race won by Leclerc at the head of a Ferrari one-two.

Russell finished fourth from an impressive fifth for Magnussen, Bottas is sixth from Esteban Ocon, Yuki Tsunoda, Fernando Alonso, and Zhou Guanyu rounding out the points.

Ricciardo finished 14th, one place clear of Norris in a tough season opener for McLaren.

Leclerc now leads the world championship for the first time, with Ferrari atop the constructors’ table after the first of 23 rounds this season.

Round 2 follows in Saudi Arabia with opening practice beginning on Friday.