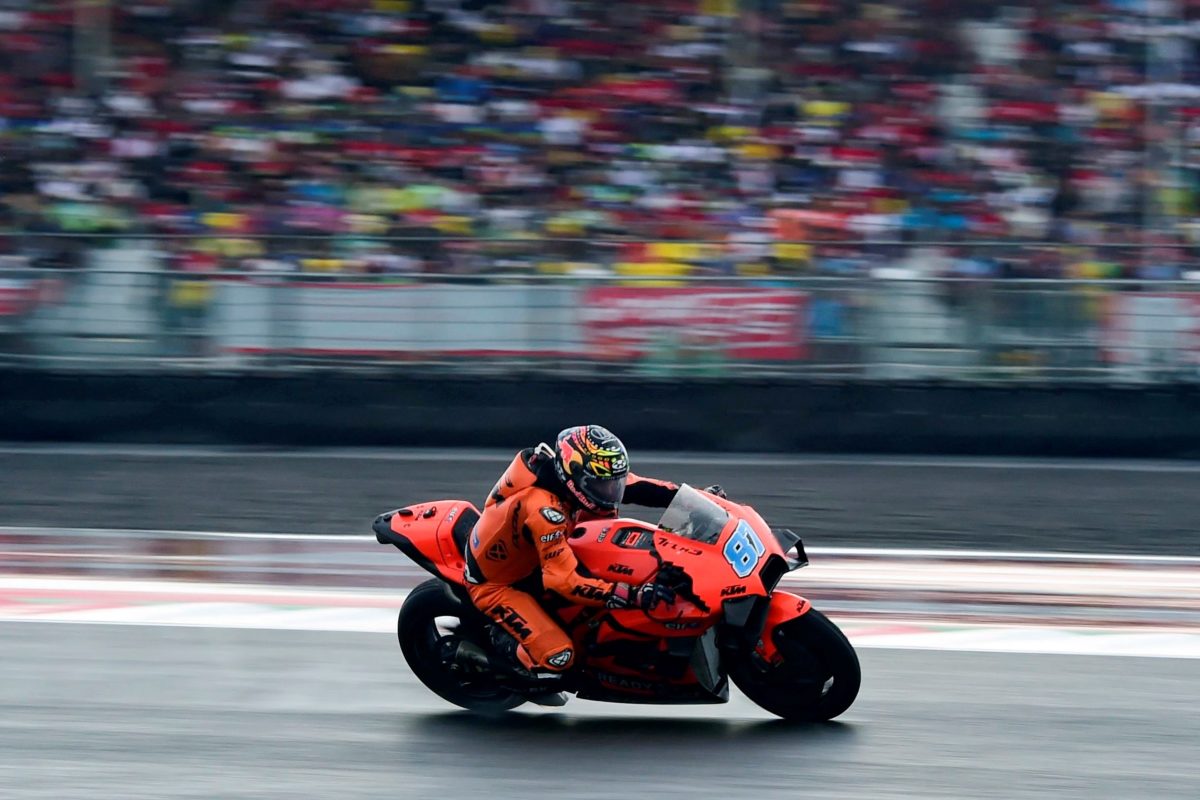 Tech3 KTM’s Remy Gardner was hamstrung by visibility issues on his way to being last classified finisher in his first wet MotoGP race.

The 2021 Moto2 world champion got home in 21st position in the Indonesian Grand Prix, a race which was delayed by more than an hour due to heavy rain at the Mandalika circuit.

Aside from the challenge of riding a MotoGP bike in the rain, Gardner revealed afterwards that he also had to contend with the fact that water was getting into his helmet.

“It was the first time riding a MotoGP bike in the rain, so it is never ideal going into a race when you have never tried the wet before,” he said.

“If I am honest, I expected more of the race today.

“I had some visibility issues today with the rain and it did not improve much as I was behind the others, but at least I took a lot of experience and managed to do the 20 laps.

“I was able to learn a lot about the tyres as they are very different from the Moto2 ones.

“The last few laps, I found myself on my own, so I had less water coming into my visor and was able to start improving my sectors and my times.

“I try to keep positive and move on to the next race.”

Team-mate and fellow rookie Raul Fernandez had a similar experience in so much that he approached the 20-lapper with trepidation due to his lack of wet-weather MotoGP experience.

The Spaniard finished four positions ahead of Gardner, but is still searching for his first premier class point.

Tech3 KTM Factory Racing team manager Herve Poncharal explained, “Raul had an amazing start, but he told us that he was a bit shy on the braking at the beginning because he only had for reference his Moto2 experience on wet conditions.

“Throughout the race, he improved his pace, did not make any mistake, learnt a lot, and just missed out on the points. We know that it is going to come soon.

“He obviously wants more and quicker, but today was a great day of learning.”

On his Australian rider, Poncharal added, “I feel slightly frustrated about Remy Gardner’s result because he is normally very strong in rainy conditions, so I did not understand quite well when I saw him losing contact with Raul’s group.

“When he came back to the box, he was unhappy with his helmet which was full of water and considerably reduced his visibility.

“At this level, when you know how much investment goes into a race, it is a great shame to be missing out on a potential good result because of a helmet problem like we had today, and I find it difficult to accept.

“Apart from this, he managed to finish the race, which is good, and he also learnt a lot about his tyres and his bike in rainy conditions.

“I think that without his problem, he would have been fighting for the points in Raul’s group.”

A KTM won the race, that of Miguel Oliveira, and the Austrian marque now leads both the teams’ and constructors’ championships.

Gardner sits 19th in the riders’ championship after picking up a point for finishing 15th in Round 1, the Qatar Grand Prix.