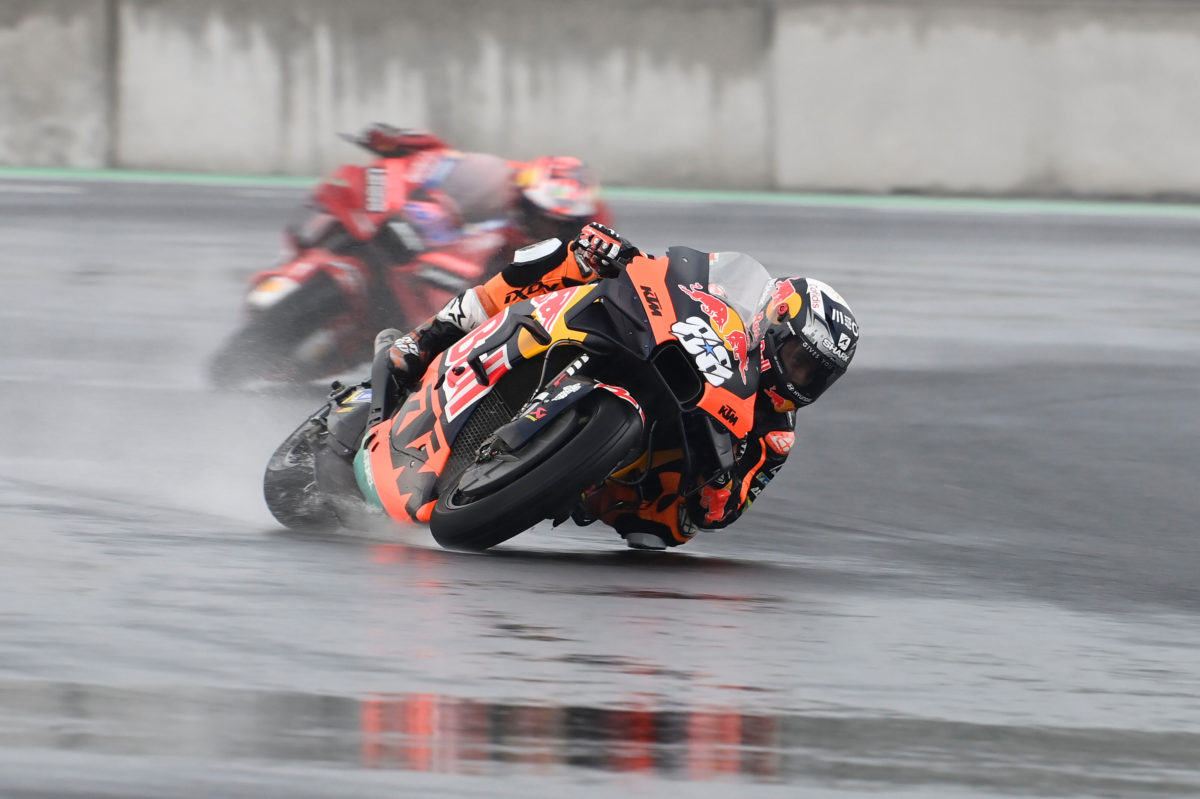 Oliveira took the lead from pole-sitter Fabio Quartararo at the end of the first lap, and was not headed again once he re-claimed first position from Miller on Lap 5.

Quartararo dropped as far back as fifth at one point but ended up taking the chequered flag in second position on his Monster Energy Yamaha, halving his deficit to the lead to just over two seconds in the final four laps.

Pramac Racing’s Johann Zarco made a late pass on Miller to grab the final podium position at the Indonesian Grand Prix, with the latter ending up fourth on his factory Ducati Lenovo Team entry.

It is Red Bull KTM which is now on top of the teams’ championship, and the Austrian marque also holds sway in the constructors’ standings.

There was plenty of drama before the race got underway, first when Marc Marquez had a massive highside in the Warm Up which would see the Repsol Honda rider ruled out due to concussion.

Between those developments, the race distance was shortened from 27 laps to 20 for safety reasons relating to heat, only for the start to then be delayed multiple times due to torrential rain.

It finally got underway at 16:15 local time, 75 minutes after originally due, with the 23 remaining riders heading off on wet Michelin tyres.

Quartararo led the field to the first corner from pole, where he was challenged on his outside by a fast-starting Alex Rins (Suzuki Ecstar).

However, Rins ran wide at the stop and he emerged fourth from the opening corners, behind Oliveira and Miller, before Zarco passed Pramac Ducati team-mate Jorge Martin for fifth at Turn 10.

Quartararo apparently made an error as he exited Turn 17 at the end of the standing lap, with Oliveira storming past as they ran up the main straight and Miller outbraking the 2021 champion at Turn 1.

Miller overtook Oliveira when they next arrived at Turn 10, but those two would break away from the field together over the next handful of laps.

Their cause was helped by Quartararo holding up Rins and Zarco, until he broke into wheelspin when he touched the white line exiting Turn 17 on Lap 3, and handed over those two positions also.

Oliveira was back in the race lead when he went down the inside of Miller on Lap 12 at Turn 5, at which time they were about two seconds up the road from Rins and Zarco.

However, the Portuguese rider on the #88 KTM started to pull away at the front, as Miller dropped back towards the #42 Suzuki.

Oliveira was a second clear at the end of Lap 6, and a full two seconds up on Lap 8, while Rins had halved the deficit to second place.

Zarco then took over from the race leader in racking up a string of fastest laps, and he was into the podium positions when he went past Rins on Lap 11 at Turn 12.

The Pramac rider quickly wiped most of the margin between himself and factory Ducati counterpart Miller, those two nose-to-tail on lap 13.

Meanwhile, Quartararo had got back in front of Rins, and as the Desmosedici riders ahead of him went to battle, he closed in on them.

He pulled off something of a block pass on Zarco on Lap 14 at Turn 16, and his fellow Frenchman was unable to make the re-pass stick when they next arrived at Turn 1.

On Lap 16, Quartararo was past Miller at Turn 12, with Oliveira by then having disappeared to a margin of 4.7s.

‘El Diablo’ then started to pull tenths out of the KTM rider’s advantage, although #88 responded well enough to be just under three seconds up as he started the 20th and final lap of the race.

He would go on to win the first Indonesian Grand Prix in a quarter of a century, with Quartararo finishing second at 2.205s back.

Miller was already under pressure from Zarco when he ran wide at Turn 10 on Lap 17, allowing #5 to go through, and that settled matters as far as third place was concerned.

Francesco Bagnaia (Ducati Lenovo) was only 15th at the chequered flag but it could have been even worse given he so very nearly dropped Bike #63 at Turn 1 on Lap 12, while running ninth.

Remy Gardner (Tech3 KTM) was last finisher in 21st position, with only Martin and Andre Dovizioso failing to make the chequered flag.

Martin crashed out from seventh position when he slipped on a river at Turn 1 on Lap 8, while Dovizioso’s WithU RNF Yamaha apparently had a technical problem.

Round 3 is the Argentina Grand Prix, at Termas de Rio Hondo, on April 1-3 (local time).